High-level CG is married to live-action in a haunting dystopian vision of a world where humans utterly depend on bio-mechanical alterations to withstand a deteriorating climate.
READ REVIEW
Next Previous 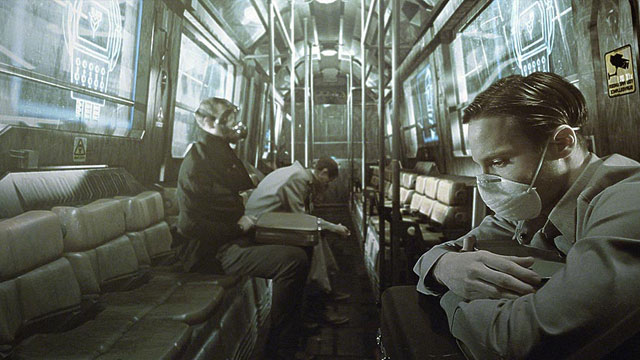 The 3rd Letter is an exciting new dystopian sci-fi morality tale from emerging filmmaker Grzegorz Jonkajtys, that is possibly the most complete effort I’ve seen yet in a short film at wedding high-level, low-budget CG into a complete and satisfying story.

Jefferey Brief, (Rodrigo Lopresti) is down on his luck–not only is he facing eviction, he also exists in a future society where humans utterly depend on bio-mechanical alterations to withstand a deteriorating climate. Jefferey must battle his insurance company, his landlord (played Jonkajtys himself) and ultimately his conscience in order to do what it takes to stay alive.

This is an intriguing setup and in other reviews I’ve seen on the internet, commentators openly wonder (hopefully tongue in cheek) if this is the future promised by Obamacare. Of course if you accept the premise of the film that literally, you have to acknowledge that climate change and environmental degradation is real, something most conservative pundits fail to acknowledge. This interesting observation aside, the film is rather apolitical, mostly attempting to represent an interior drama, as Jefferey becomes more unhinged and desperate as his circumstances turn increasingly dire.

The lush CG backgrounds are undoubtedly the star of film, as Jonkajtys lovingly paints the film’s future setting as a gray industrial wasteland, that shows up in the background of several scenes. The sci-fi trappings actually disguise the fact however that the bulk of the story is confined to tight, simple spaces—the man’s apartment and bathroom primarily. That is both the strength and weakness of the film. If the point of The 3rd Letter is to be a small-scale FX masterpiece, a catchy showcase of Jonkajtys’ talents, then this is to the detriment of film. CG integration is less impressive in its more static applications, and there are few instances of true character interaction with the surroundings—and of course no flashy chase sequences, like in the Hollywood darlings, The Raven or The Gift.

What is present is though is genuine drama with narrative resolution, which is, for me, certainly beneficial to my enjoyment of The 3rd Letter. While certainly a highlight, the film does play a little loose during its 15 min runtime, a laxness of of tension in moments which means, that purely narratively, the film suffers when compared to another morality tale, the taut and gripping single-set short film Black Button.  The confined space of its closing scene however helps to tighten up the action however and ratchet up that tension, allowing the film to close on a strong note. Lopresti, working primarily by himself, turns in solid work as the main character, and if he plays it a bit too hot in the beginning, redeems the performance through that wonderful final sequence on the phone.

Jonkajtys is a VFX artist and animator by trade—his website informs us that he has contributed VFX work to several large, notable films like Sin City, Hellboy and Pan’s Labyrinth. He has however been working on his own projects for a few years now. He first showed up on my radar via his 2007 effort Ark, a mature and disturbing animated film that won SIGGRAPH’s Best in Show that year. With all that experience however, he probably does not have much experience in either writing dialogue or live-action directing. So while there are aspects of both in which to quibble with in The 3rd Letter, overall it is an amazingly accomplished effort. With this foray into live-action he is certainly turning heads, most notably winning the Best Director prize from the prestigious and industry-connected Hollyshorts festival, and Jonkajtys now has feature film representation through Verve LA, and commercial representation through Mothership.  Hopefully the online release of this film brings him further opportunities and we’ll be able to continue to follow his creative evolution through bigger and even more prominent projects soon.