A stylish and meditative film centering on the unhappy life of a neglected teen, told from the perspective of his neighbor who attempts to make sense of him.
READ REVIEW
Next Previous 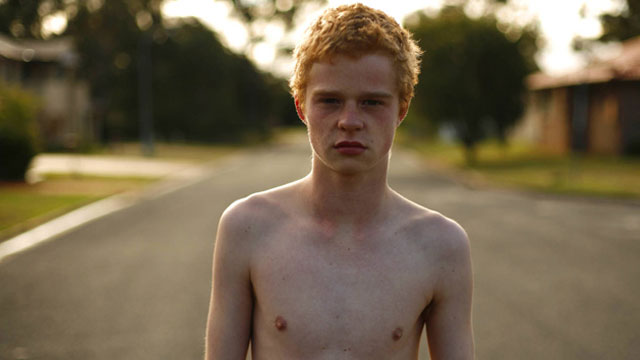 Drama about Innocence in Live-Action
Made In Australia

In Crossbow the spoiler is right in front of you, there in the title. A crossbow is an anachronistic device and does not, at least in my mind, lend itself well to analogy or metaphor. In spite, or, more accurately, precisely because this ominous title hangs over the very start of viewing, the short film remarkably sustains a growing dread throughout its languid narration and slow-moving, though arresting visuals; maximizing its force not through the promise of surprise but through the inevitability of its conclusion.

The film opens to a very average suburban neighborhood before peeking into one house in particular. The loud and exaggerated sounds of rough sex are heard as the camera moves in on the vacuous face of a teenage boyour main character. An unseen narrator relates the boy’s predicament: he lives in a home of rough folk, his mom and dad thinking nothing of engaging in boisterous sex in his presence, nor for that matter doing drugs and partying with other men. The narrator reveals himself to be the boy’s neighbor, and muses about the mom’s seeming indifference to the boy inbetween observations about how much he’d like to have sex with the older, permanently panty-clad woman.

The film in a way is a quest, albeit of the inward, self-reflecting type, as this neighbor attempts to empathize with and ultimately make sense of the boy. But for what reason? What is spurring the neighbors oratory? That is indeed what the film works up towards, but the exercise is perfunctoryyou already know.

The short film thus exists as a meditative elegy, from the neighbor to the boy, and the visuals support the creation of such a mood, using frequent slow-motion to imagine scenes of alienation the boy might have experienced. Yet this empathy is disturbingly buttressed by the sexual fetishization of the mother, as the camera lingers erotically on the body she so frequently flounts in and around the home. Sexual longing on the neighbor’s part is part of his explanation for the boy’s state, yet that means the neighbor must in a way confront his complicity, a feeling if that is expressed in his voice, if not completely registered in his head.

There is no moral to the story per se, and if this elegaic mood fails to find spark within you, then you will find the short film bland and possibly even distasteful. Upon playing Sundance in 2008, many accused writer-director David Michôd of misogyny in the film’s depiction of sexuality. However I find the elegaic streak that Crossbow mines to be rare and wonderful in film, and kudos go to Michôd, because it is difficult to pull off. Indeed the film is strikingly reminiscent to one of the best films of this vein, Sofia Coppola’s work, The Virgin Suicides, a movie structured very similarly, with its title that undermines suspense, and its observant narration that wrestles with the exquisite sadness of seemingly senseless tragedy, and how it relates to sexuality and nostalgia.

Michôd is an Aussie who is part of the increasingly famous Blue-Tongue Collective, whose films have been featured numerously on this site and others. Spider and I Love Sarah Jane have appeared on our lists of our favorite reviews from 2009 and 2008 respectively. However I believe that this is the best short from the group that I’ve seen so far. Blue Tongue’s output relies heavily on surprises and twists, and nominally Crossbow is no different, and yet in practice the focus on atmosphere and mood rather than narrative trickery creates a feeling that the other films we’ve reviewed cannot match. Indeed Miracle Fish the Oscar nominee from this past year, is truly a film that I think wishes it could be Crossbow:  both films center on vacant, disaffected boys that suffer from some sort of abuse, before ending in violence. However whatever feeling the empty school in Miracle Fish tries to convey simply does not come across powerfully, unlike the images of the mother and the activity around the house in Crossbow, nor does the violence at the end of Miracle Fish,seemingly random, hold any sort of weight against Crossbow’s slow unfurling, made all the more powerful by how clearly it is foreshadowed.

Michôd has, like many of his other compatriots in the group, moved on to features. His debut, Animal Kingdom, played Sundance this year. I have yet to have a chance to see it, but will be taking the opportunity as soon as I can in order to see the continued development of this fascinating young  filmmaker.