Spike Jonze's story about two robots in love based on Shel Silverstein's "The Giving Tree".
READ REVIEW
Next Previous 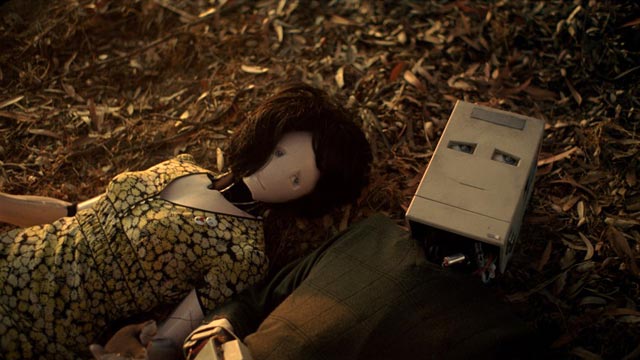 If you hadn’t heard, Spike Jonze has continued his sustained assault on the short film medium, this time with his long-anticipated “secret robot short film”,  I’m Here. This of course is coming on the heels of the Where the Wild Things Are DVD-extra, Higglety Pigglety Pop! and the Kanye West collab, We Were Once a Fairy Tale—a corpus which altogether represents the most attention short film has received from an established feature film director in a generation. And, in his idiosyncratic way, Jonze has once again succeeded in creating something familiar yet weird—beautiful undeniably, yet which will surely be polarizing to audiences.

The film, written by Jonze as well, follows Sheldon, a sad-sack robot existing in a world where such a state doesn’t seem to be a big deal. He works at local library, he rides the bus, he spends his nights in a bare little studio apartment, all the while looking shy and mopey. That changes when he catches the eye of a female robot—a love interest of the indie/reckless/freespirited taxonomy, who enables Sheldon to connect with the world and enjoy himself for perhaps the first time.

Though the short film has been out a few days, I just finally watched it. Like I commented recently with D-I-M, Deus in Machina, it’s hard to get up for 30min short films even if you’re confident of the quality. Despite arriving with fanfare and oozing confident filmmaking, I’m Here had to wait in my own personal line (even while thousands of others had to wait in a virtual line—more on that later). However, now in its afterglow, I confess that the film is nothing if not engrossing, even as I harbor reservations regarding it.

As piece of filmmaking it is an unqualified triumph. From the opening shot the film hits its melancholy groove and captivates. Jonze is a master stylist, and crafts scenes of exquisitely mild depression so well. Via some mysterious personal alchemy of pacing, framing and sound design, Jonze has the remarkable ability to make one feel “present” during a film in a way few filmmakers can, even in the absence of gripping action or dialogue. Despite being a robot film, it forgoes the action, futurism, and even the tech-fetishism normally associated with its ilk, instead focusing its energies into being a mundane relationship drama.

Unfortunately mundane is the correct word. The robot aspect is not pure gimmick as the plot’s ultimate direction is inextricably tied to this mechanical element, and yet for much of the film if you take away the ironic bemusement regarding the substitution of people for robots, you’re left with a very run of the mill romance. Perhaps this is necessary to ultimately sell the third act of the film, but Jonze’s attempt to recreate Lost in Translation via stock romantic set pieces is stilted even while it is frequently gorgeous: like the lens-flared glow from the woods at sunset, or the dreamy montages from the party while Girls “Hellhole Ratrace” surges in the background.

While cliché, the courtship is cute. It is the third act I do not like, even as I must respect it. My dislike is selfish not objective, I was sad and surprised to see matters take a turn for the worse, even though in retrospect ample warning was given. Like We Were Once a Fairytale, I’m Here finds Jonze employing sleight of hand, leading the audience in one direction, only to turn that conception on its head. Here romance is corrupted, as self-destructive behavior is very literally realized with Francesca. Francesca keeps having various body parts get wrecked, and Sheldon, hopelessly in love as he is, is all too eager to volunteer his own as replacement, culminating in the donation of his entire body.

This is a powerful development, and remarkably open to a range of reactions and feelings, which is why Jonze and this film do ultimately demand attention. Some may see Sheldon’s actions as the ultimate expression of love. Others, may view it as the reckless enabling of Francesca’s self-destruction. Not to think too deeply into it, but I feel that in the more individualistic West, it is very likely that viewers will frown upon Sheldon’s self-abnegation, tending to see Sheldon’s sacrifice as foolish and exploitive, whereas Eastern cultures are much more sympathetic to the sacrificial hero, largely one surmises due to Buddhism’s influence, and the concept of negating the self. This bit of amateur sociology brought to you by a lifetime’s love of Asian film =P.

Throughout it all I tended not to focus on the damage Sheldon may be doing to his love long-term and instead look at the effect on Sheldon himself. Throughout the act of watching, I’m silently screaming “NO!”, during each stage of this slo-mo car wreck, and yet in the end found myself quite moved. The argument is that one should not sacrifice oneself to another, that there are always other fish in the sea and that short term emotion masks what will become long term regret. And yet Sheldon’s life without Francesca was so barren. Key moments of the film, such as the music at the car, or the question of what the ocean is like,  expose how immune to the simple act of feeling Sheldon had been, period. There is reason to believe that life without Francesca is not a life worth having at all, and and even in bitter-sweet sacrifice, the powerful emotion of such an exchange is a reason unto itself to make the decisions he did.

The film debuted stateside at Sundance recently, and thanks to Absolut, we are getting a remarkbly quick turn around on the internet. However many have complained about Absolut’s process of display—a website that poses as a virtual theater, including a Facebook linkup in order to watch the film with friends, and a limited number of “seats” which lead many internet viewers to turn away, or race to YouTube. I for one had no issue, as waiting a couple of days like I did I was able to see the film first try. Besides, though an occasional pirate, I’m not so self-centered that I’ll begrudge an entity and artist the opportunity to provide me free entertainment in the manner of their choosing. On top of that, I actually thought it was pretty cool. The virtual theater really did replicate the “event” like nature of watching the film, especially the initial zoom to full screen upon start. For once I did not multitask during a short film.

Jonze has provided us internet denizens a superior short film once again, one of exceptional execution and vision, and Absolut and the ad teams behind them have crafted a unique screening experience that is fun and though occasionally clunky, does respect to the film itself. I encourage you all to check it out.