We Were Once a Fairy Tale

Spike Jonze spins a blend of realism and fantasy in this bizarre look into the twisted world of Kanye West.
READ REVIEW
Next Previous

We Were Once a Fairy Tale 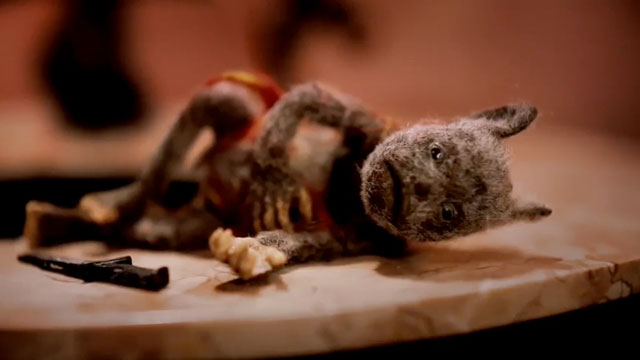 They had me at the title. Great, great title. Even without it though, with two artists on top of their games, there was no way I wasn’t going to be amped up to finally see Spike Jonze and Kanye’s newest short film collaboration, We Were Once a Fairy Tale. Hell, I’d only been waiting for a month. It had been well-publicized that the film, having debuted in June at the LA Film Fest, was going to show up Sept. 8th on itunes. That day came and went disappointingly, and now out of the blue the film shows up on Vimeo (edit: no more!). Oh those, crazy creative types.

This is going to blow up the blogosphere, so you don’t need me for the scoop, but I’m sure you’re anxiously awaiting my valued opinion on the zeitgeist (right??).  For ever a brief moment, the pop culture maelstrom has graced the format of the short film, but what of the product?

We Were Once a Fairy Tale, is by all standards a bizarre film. Surreality is par for the course I guess from a director whose oeuvre includes Being John Malkovich, and from a platinum-selling singer who can’t actually sing. The film follows Kanye at swank club, and he is acting like an ASS, or least he’s  drunk off of it. Kanye is stumbling around harassing the other customers, hitting on ladies, dancing to his own songs. A handheld camera, performing admirably in natural low light conditions, swoops in rhythm with Kanye’s inebriated stumblings, flittering in and out of focus—a filmic interpretation of a drunken haze. This initial section gives way to an interlude followed by a trip to the bathroom. From there the weirdness hits its crescendo as what had been a relatively realistic piece gives way fully to fantasy.

As pleasing visually, and gripping cinematically, as the fantastic climax is, it is almost a disappointment following the brilliant setup of the film. The opening, with Kanye’s embarrassing behavior and lonliness, really has a poetic quality, as Kanye alternates between a figure of mockery and sympathy. Ignore the film’s possibly most surreal aspect, that in the sycophantic world of these luxe clubs anybody would want to blow off Kanye;  instead follow the film’s logic, which allows you to easily incorporate the film’s title into a close reading—they are all listening his music, but have no respect for the broken man who made it. Connecting on a meta-level with the well-known personal traumas Kanye has endured in the past year, it is easy to imagine that “Happily Ever After” is something irretreviably of Kanye’s past: fitting into a well-worn narrative of a fall from grace. Sadly, though poignant, that story would be too simplistic for this pair I imagine. Besides self-pity is unbecoming of a rap superstar. So instead we get the bat thing, which, in its outrageousness, obscures the sweetly tragic disgrace, and elegant humanizing of Kanye’s character (Kanye).

That said, it IS possible to reconcile the bat-thing ending to this earlier reading, along the way elevating the scene to its rightful place as a necessary conclusion to the narrative by preserving the spirit of the opening, but transforming Kanye from pitiable to redemptive. It’s my uninformed take, but follow along if you like. If it is true that Kanye is in an emotional torment leading to his self-destructive behavior—perhaps related to the heartbreak which we know was the progenitor of the 808 and Heartbreaks album, and which is likely alluded to by the film’s dream interlude—then this finale is a metaphorical cleansing. Kanye, reaching the depths of his sadness through steely personal probing (pun fully intended),  and eruptive, yet cathartic, release—discovers the metaphoric source of his emotional unbalance. Confronting it at long last, Kanye does not smite it in a fit of anger, or absolve it in charitable forgiveness. In what is a rather remarkable acting performance, Kanye

recognizes and acknowledges its presence and existence: it is something that has been a part of him for a long time, worthy of respect. No longer though can he abide by it as his silent passenger, the time to lay down his burden has come, and so with grave honor befitting the scene’s samurai motif, he allow the metaphoric sadness to undo itself.