In a bleak future, a lost soul seeks desperate measures to escape his luck. The punishment if caught? Years spent locked up in his own personal nightmare.
READ REVIEW
Next Previous 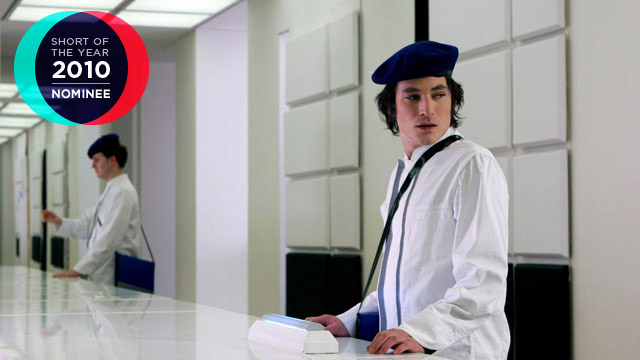 Two and a half years ago, I proclaimed that D-I-M, Deus in Machina was not just the harbinger of a new age of advanced CGI, short film, but the heights of this changed cinematic world. I hold to that, as the no-budget shorts of today often have wiz-bang effects that rival those of big-budget, studio features from a few years back. But dwelling on that might distract you from D-I-M ’s tight plot, thoughtful theme, and generally superior storytelling. I’ve waited three years for it to become available online, and I am thrilled to be able to direct viewers toward one of my favorite shorts of the last decade.

Lutz is a dreamer and malcontent in a controlled world where life is dictated by the number of social points you have. Intelligent enough to enter the prestigious Institute for Neuro-Informatics but lacking both the determination to succeed within the system and the sense that there is anything better, Lutz seeks to escape. With the help of Jannik, an ex-con and ex-dreamer who has suffered in the virtual prisons where each individual’s Hell is personalized, Lutz hatches a plan to give him what he’s always wanted, though even he realizes that the most likely outcome is a lifetime of agony.

As I watch this film again, what strikes me is not the FX. Those effects are excellent, be they flying robots, future cityscapes, or fifty foot mothers, but they don’t steal the focus. It is the story that grips me. This is a story of hope and fear and redemption. The quality of those effects allow Axel (writer/producer/director) and Henning (writer/producer) Ricke to tell that tale without my mind, and hopefully yours, slipping out of their world. I am there with Lutz, feeling his doubt, his hope, and his need for something else. Stars David Winter and Reinhardt Firchow bring such loss, energy, and humanity to their characters, but then the Ricke brothers make that easy, giving them such rich personalities to work with.

If my description makes D-I-M sound dour, let me assure you it is anything but that. Fast paced, with twisted humor running throughout, it is even more enjoyable than it is thoughtful. Cinematic cyberpunk has been a disappointment.  For every Blade Runner or The Matrix there have been twenty mindless, poorly shot rip-offs. D-I-M gives fans of the sub-genre something to cheer about again.

The Ricke brothers are just getting started.  Henning took the director’s chair for their follow-up, Rosfeld, a marvelously sly science fiction comedy that hit the festival circuit in 2009. It is not available online, so you’ll have to keep an eye out for it at your local festival.