A feature film on Short of the Week! What is the meaning of this? Ignoring the unique circumstances of an acclaimed SXSW feature premiering for free online, what about our site’s editorial commitment to the short form? Well, dear readers, collective: unconscious is a unique kind of feature, an anthology made made up of individual short films. Spearheaded by Jane Schoenbrun, who, at the time of production was Head of Film for Kickstarter, the project assembles a hotshot team of rising stars of the short format including site alums Lauren Wolkstein and Lily Baldwin. Connected through concept, but not subject, the films can stand alone. So, if you think about these 5 films as a short film playlist of new, weird, powerful visions from gifted auteurs, then there is no way we couldn’t cover it.

Weird, is an important adjective to keep in mind however. The films of this project are uncompromisingly experimental, blending the individual filmmaker’s established strengths with surreality. This is by design, and ensured through the anthology’s unique development process. Initially the 5 filmmakers (Daniel Carbone, Josephine Decker, Lily Baldwin, Frances Bodomo, & Lauren Wolkstein) were asked to write down a dream they experienced. The dreams were then assigned to a different filmmaker to adapt as they saw fit. 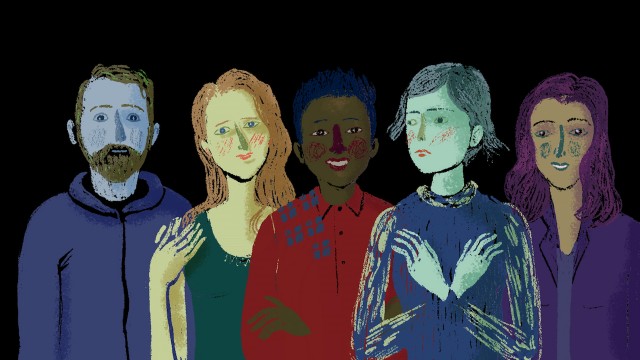 Animated depiction of the filmmakers by Maya Edelman

Working with dreams as a jumping off point inherently introduces subconscious elements into the story mix, but opportunities to gravitate towards the conventional were discouraged by the project’s founding principles. Schoenbrun so elegantly relays the reasoning behind this in his Producer’s statement that I will quote him at length,

“During my time working in the independent film industry at places like Kickstarter and IFP, I’ve come to understand several truths about the state of filmmaking today. Like how most emerging filmmakers will only spend a few weeks behind the camera every several years, the rest of their time spent on the myriad responsibilities of bigger projects — pre­production, post, distribution, career­-building, and bill­-paying. Or how much the pressures of commerce can encroach on a filmmaker’s artistic process from the get-­go, with an almost immediate push from the industry to cast name talent, tell commercial stories, water down one’s vision towards mass­-appeal.

From its inception in late 2014, collective:unconscious was conceived of as a response to these tendencies. The core concept of the project was to bring together a small, carefully curated group of emerging American filmmakers working at the intersection between narrative and surrealism, and to create a platform through which they could experiment for the sake of experimenting.”

That passage really resonates with me. The animating purpose of Short of the Week is to celebrate new, bold forms of storytelling and champion gifted, emerging filmmakers. However, as short films continue to gain prominence and directors are now routinely emerging from this world with major TV and studio deals in-hand, a sensibility takes hold that “shorts are the new script”. This is a trend to celebrate, but it puts subtle pressure on filmmakers and programmers alike to gravitate towards the mainstream, to increasingly angle for commercial viability by creating what is marketable. While this tendency has always been felt, it is important to push back as well, to remember that the relative low stakes of short filmmaking is an asset, not a hurdle, and that the experimental is intrinsic to the development of the new.

The 5 films presented here represent that spirit fully. While avant-garde, and often structurally adventurous, they are still fundamentally communicating stories, often utilizing their surreality to convey feelings of uncommon power. It is a sensibility worth celebrating. The films, in order of appearance are listed below. To learn more about the individual films and their creators, check out the collective:unconscious website. In addition to streaming, the film is being made available in a unique bittorrent bundle, with some of extra goodies for those who want to dive in deeper.

Everybody Dies
Directed by Frances Bodomo
Dreamt by Josephine Decker