After 33 years in federal prison, 22 of which spent in extreme solitary confinement, Jack Powers embarks into a modern world, journeying across the Northeast to start a new life.
READ REVIEW
Next Previous 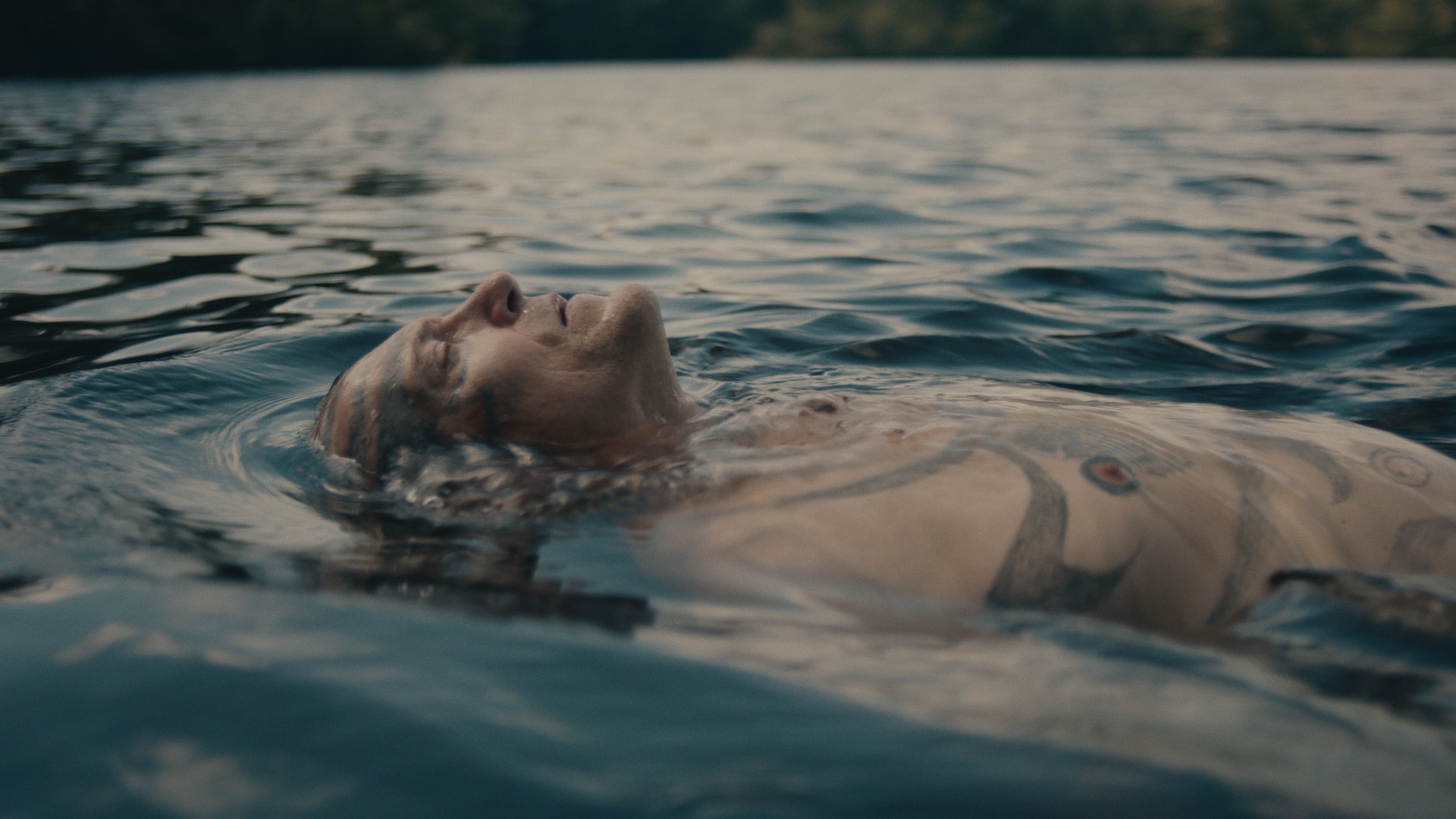 What does it mean to be released after 33 years in prison, especially when 22 of those were spent in solitary confinement? Pete Quandt’s Tuesday Afternoon raises more questions than it delivers answers, but it does give us a sense of what it might feel like to be outside of prison after such a long time.

We meet ex-convict Jack Powers right after his release from prison, following his journey from his first phone call in freedom, to his mother, to the moment they are finally reunited. At first, everything outside of prison seems to be too much for Jack, from the noise of the cars, to the feeling of being free itself. How can you move on after 33 years?

We join Jack during some deeply personal moments, as he grieves for his son for example, but throughout Tuesday Afternoon we never get his full story. Although this could have easily worked to the short’s detriment, one of the outstanding features of the documentary is that as much is said by what is left out. We don’t need to know the details of Jack’s crimes or what he had to go through during his prison sentence to grasp his situation. It’s all there, between the spaces and in his demeanor. Jack was sent to prison the year I was born, literally a lifetime ago. As much as anything, the film is a meditation on lost time, the feeling of standing still as life revolves around you. 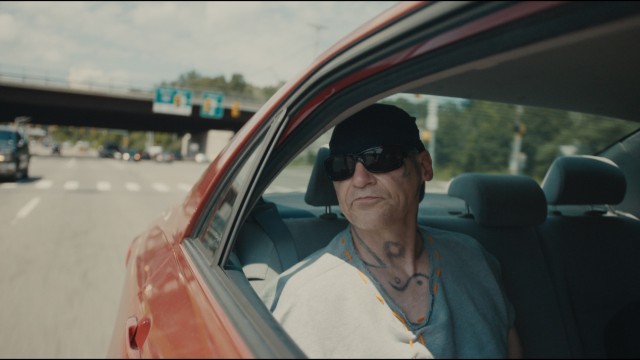 Jack on his first day out of prison

Filmmaker Pete Quandt isn’t interested in painting the entire picture of Jack’s salvation. We learn a little bit about the reason for his incarceration through a chance conversation in a supermarket (apparently Jack was a bank robber in an earlier life) and we don’t hear anything about his gruesome time behind bars. The elliptical storytelling is part of the point. Even if he tried to make a by-the-numbers documentary, Quandt wouldn’t be able to get to the bottom of Jack’s experience.

Instead, what Tuesday Afternoon captures is much more ephemeral. It lets us experience the world in glimpses through Jack’s eyes, without any big revelations or narrative surprises. The mundaneness of what we get to see in the film isn’t a weakness, it’s its biggest strength. After such a long time shunned from the world outside, everything must seem magical. The most banal situation becomes a miracle to behold, almost too much to bear and to take in. A word Jack keeps repeating at the end of the film is “amazing“. He marvels at the nature around him and the experience of seeing his loved-ones again. Everything is amazing, now that he gets to be his own man again.

When Jack gets to see his mother and hugs her with all his heart, there are no further overly grandiose gestures needed, as the enduring love of a mother for her son is as emotional as it gets. For Jack’s mom, he will always be her son. The way she sends him air-kisses as a goodbye is heartbreaking in its innocent show of affection. 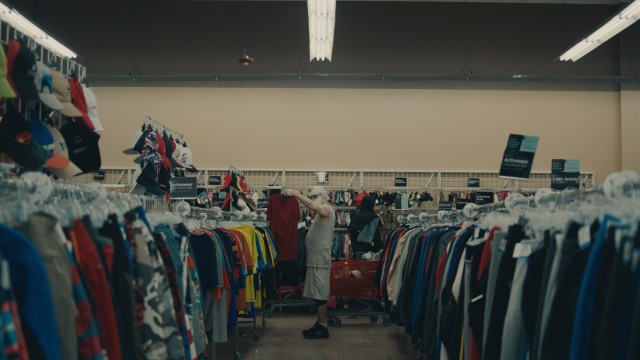 Even the mundane experiences – like clothes shopping – are seen with fresh eyes after 33-years in prison.

Watching Tuesday Afternoon mainly taught me two things – the first being a lesson in empathy. I have to admit that I was too judgmental when I first saw Jack on-screen, and I definitely would have preconceived notions about a man like him in real life. Without knowing his past, his unusual tattoos alone would make me feel suspicious. It’s almost like a reflex, but it’s something that can certainly be improved upon. Empathy can fade over time, either through bad experiences or perhaps a stressful life on autopilot, so sometimes it has to be made aware again, learned anew and trained like a mental muscle. One of the best training grounds for this behavioral change in consciousness are stories, the power of documentary films in particular.

My other takeaway was a restored sense of appreciation for the little things in life. It doesn’t take much to be happy. If you count yourself lucky enough to have a loving family and a few good friends, there is so much to be grateful for. Living in a society that’s always wanting more, we tend to forget what really counts, but when I see someone like Jack, it’s all put back into perspective. As Quandt explains: “The societal assumptions we hold about people with Jack’s background and outward appearance so strongly contrast with the tender, thoughtful, loving man he actually is.”

In his famed commencement speech This is Water, writer David Foster Wallace touches upon both aforementioned aspects. One of the main sentiments is the importance of consciously considering our surroundings and how much agency we actually have in deciding how we perceive the world around us. It takes effort to show empathy when we are not feeling our best, when we disagree with other people, or when we are easily irritated. It is so easy to disregard that every single person has their own story, their own hopes and fears, an infinite interior life. The criminal we see on the news is still a person: someone who is loved by his mother, who mourns people he has lost, who longs to see another day.

By his own account, Brooklyn based director and cinematographer Pete Quandt is “drawn to stories focused on the working class experience,” and he also has a personal connection to his chosen subject matter. “I’ve had family members incarcerated and I’ve always been interested in the process of re-exposure,” he explains. “I was connected to Jack via Solitary Watch, a non-profit dedicated to ending the wide-spread use of Solitary Confinement. Jack has written for [their website] in the past and was seeking a filmmaker to document his first day out. Once I signed up, Solitary Watch provided a $5,000 budget to make the film.”

Tuesday Afternoon was picked up by the New York Times Op-Doc series and continues to remind viewers of the power of forgiveness, redemption and second chances. Quandt is currently working on a feature expansion of the short, focused on Jack’s post-carceral life out west in a RV. He’s also working on another short observational documentary set in the American prison system, which he says is “about an incarcerated mother and her two children, shot over the course of a weekend during a family trailer visit.”