For ten years, I've pretended to make a movie out of my grandfather's Algerian war souvenirs. Today, I’m not sure I want to hear what he has to say.
READ REVIEW
Next Previous 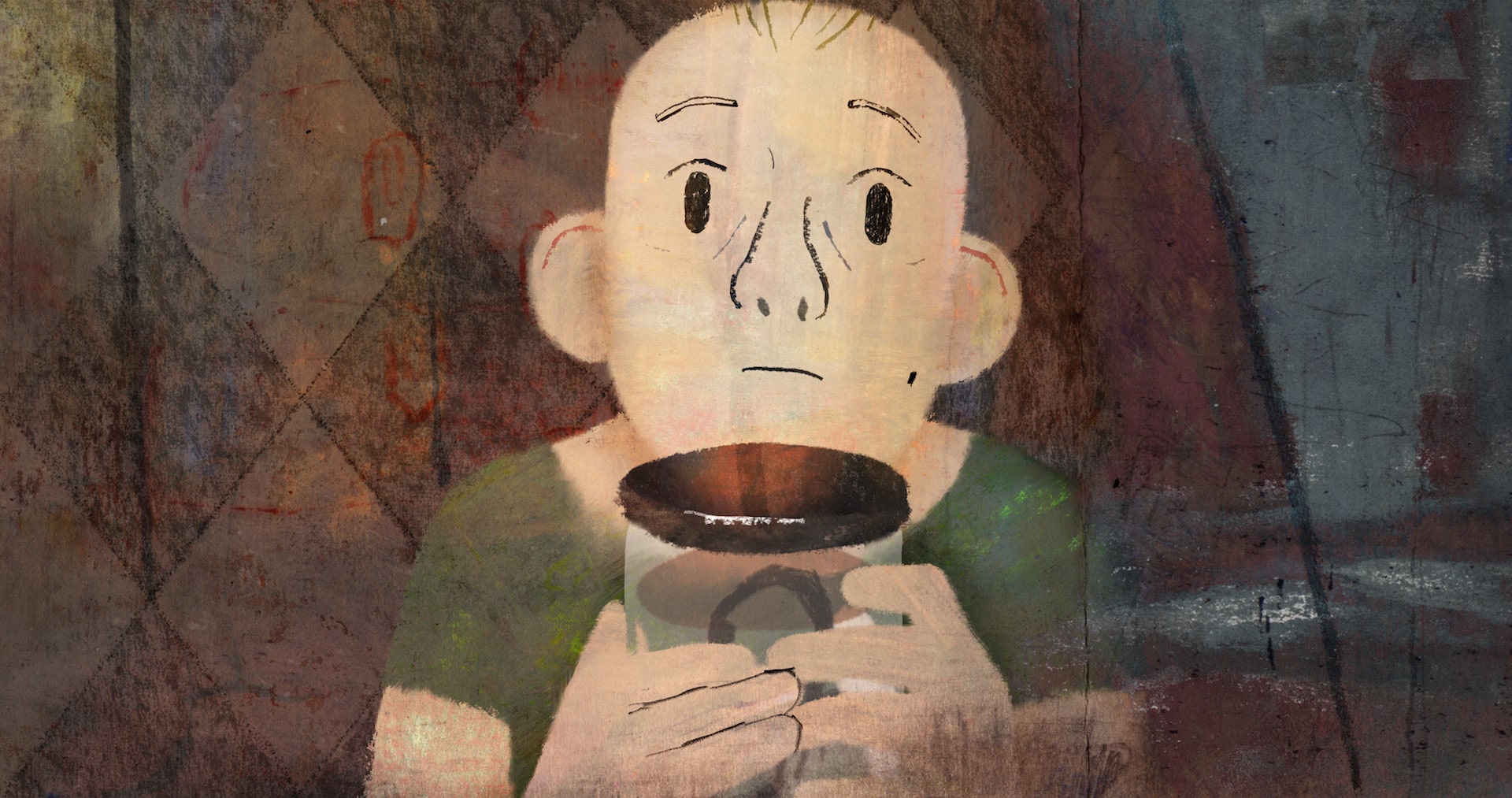 Grandfathers are mysterious creatures. As a child, my own was a man I both admired and feared. A gruff Northern soul with eternal stubble and faded Navy tattoos, it was only after he died that I realised how little I knew about him. With age and hindsight, I’d love the opportunity to spend a little more time in his company and begin to try to understand the man he was. Director Bastien Dubois (Madagascar, carnet de voyage) obviously had similar feelings, as his Sundance-winning, Oscar-shortlisted film Souvenir Souvenir centres around his unsuccessful attempts to unravel the mystery of his own grandfather.

Opening with a scene of a young boy discovering a preserved scorpion in his grandparents’ belongings, Dubois’ interest in his grandfather’s time in the Algerian War began at an early age. As a child, he knew “it would be difficult to talk about it with him”, yet over the years he persevered and Souvenir Souvenir is a result of that journey and his continued interest in the history of his enigmatic ancestor. 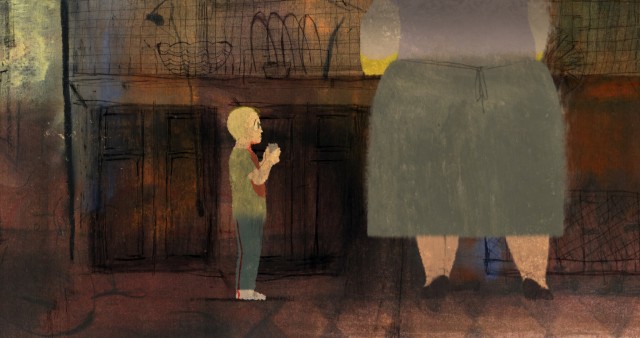 A young Bastien Dubois asks him Grandmother “Why do you have a scorpion?”

As a filmmaker, Dubois took the obvious route to solving this riddle and decided to make a film about it. With his grandfather refusing to talk, at first, he decided to tell a “quite radical” narrative, based on imagining the worse scenario for his involvement in the conflict. However, the director was never comfortable with this approach and despite trying other avenues, he admits (in a statement on his website) “every time something went wrong” and that he “gave up for mostly valid reasons”. Concluding that: “Maybe I didn’t want to make this movie? Maybe I didn’t want to know if this man who almost raised me might have taken part in the worst atrocities?”

Souvenir Souvenir is what Dubois perfectly describes as “the ‘making-of’ of a film that does
not exist”, as it doesn’t specifically set out to detail his grandfather’s war stories (the director has so few to share), but instead explores how his own attitude towards the subject changed over a number of years. Admitting that as he dug deeper he began to understand “what was at stake for the balance of my family”, Dubois was obviously facing a great internal conflict, revealing that “I pretended I wanted to make a movie but secretly hoped I didn’t have to”.

Outside of the deeply personal and moving storyline here, Souvenir Souvenir is notable for its eclectic art style, switching between a textured, painterly aesthetic (developed in collaboration with illustrator Jorge González) for Dubois’ IRL story and cartoonish excess (created by Gilles Cuvelier) for the recreation of the filmmaker’s early attempts at bringing his grandfather’s story to screen. The contrast between the two styles is striking and if you put stills from both side-by-side you’d assume they’d never work together, but they do and credit there has to go to Dubois. 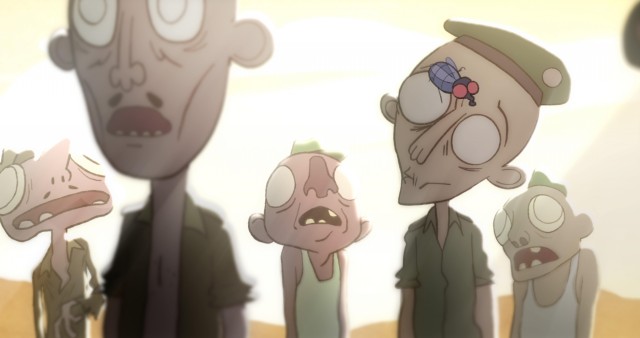 The “cartoony” part of Souvenir Souvenir was created by Gilles Cuvelier at Studio Train Train.

The over-the-top visuals of the war scenes feel very detached from the more relatable, down-to-earth aesthetic used for the majority of the short. This more juvenile style working to not only highlight how little Dubois knew about his grandfather’s time in the Algerian war, giving these moments a fantasy feel, but also showcases how his attitude towards the subject changed over the years. And if the frenetic energy of those combat sequences was about taking us inside the filmmaker’s mind, as he tried to process the atrocities his grandfather may have been involved in, by contrast, the scenes tackling the actuality (those moments Dubois doesn’t have to imagine) have a much more grounded, believable feel to them. It’s these sections that are undoubtedly the most visually pleasing, but I can’t help but wonder if they would feel so without the harsh juxtaposition of Cuvelier’s animation.

I’m often asked about the appeal of short film and what it is about the format that I find so enticing. My answer always orbits around the idea of being moved and engaged as much as any feature, but in a fraction of the time. Souvenir Souvenir is the epitome of this belief. Watching it, I feel honoured to be invited into the inner sanctum of Dubois’ life and inspired by how open he is in revealing what feels like a very private part of his family’s history. And although I was totally immersed in the specifics of his own story, the universal themes of communication, trauma and generation gaps meant there was plenty to relate to here. 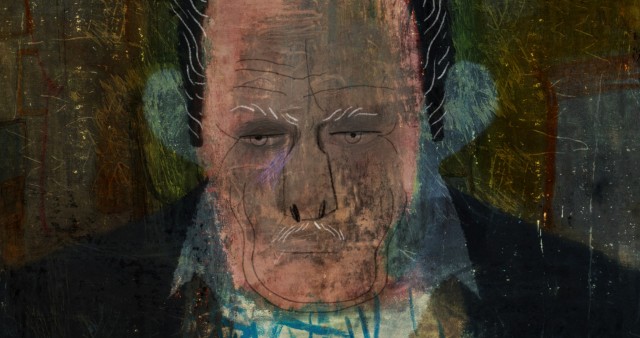 “I wanted to spare this man I love, my family and especially myself. I was in denial.” – Dubois on why that original movie never saw the light of day.

I mentioned my own grandfather in the introduction to this article and the troubles I had in communicating with him and Souvenir Souvenir has inspired me to reflect on that relationship and consider what caused that divide. It could have been the age gap, it might have been a culture clash, but ultimately I never had the chance to find out and regret not knowing more about his life experiences (he was also in the forces) and how they shaped him. When I think of the grandfather figure now though, I don’t think of him, but of my own dad, who has taken that role to my children. After watching Dubois’ outstanding short, I feel inspired to ensure they know more about their grandfather’s life than I did about mine. I honestly can’t remember the last time a feature made me feel like that.

Currently one of the 15 films shortlisted for the Best Animated Short Film Oscar, I’d be surprised if Dubois film doesn’t make the cut when that list is culled to just five in early February. Souvenir Souvenir is a special film and deserves all the praise and accolades it’s garnered in the last year or so, if it becomes an Academy Award nominee it may not remain online forever – so watch it while you can.