The Oscar-nominated animation about a journey across the geographic and cultural landscape of Madagascar.
READ REVIEW
Next Previous 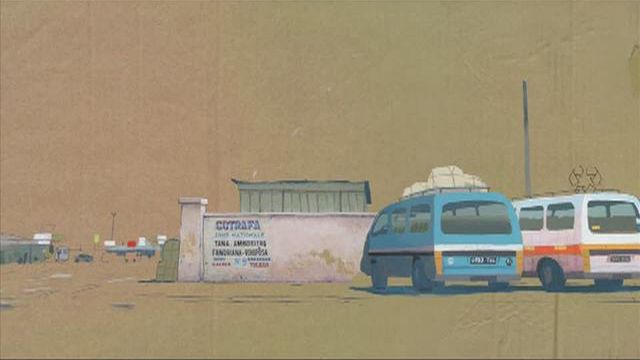 Madagascar is a film I first mentioned back in July with the review of the Fluxus Online Film Fest, and which has steadily grown on me. It’s a film that has what can be seen as a pretty big flaw, but the things it does well are so extraordinary I want to give the film the highlighting it deserves. I sincerely doubt animator Bastien Dubois will mind my reticence in giving Madagascar its due since everyone else has been bending over backwards to do so.  The film is completing quite the prodigious festival run: playing Sundance, winning at Ottawa, winning at Annecy. Its likely Oscar nomination (the film is on the 10 film shortlist) will simply be the culmination of an incredible year for Dubois, a, you guessed it, Supinfocom alum.

Told in the form of a travel notebook, the story follows the steps of a Western traveler who is brought face to face with the Malagasy customs and rituals, especially the Famadihana, the ritual of the turning of the bones.

What is on display in Madagascar to garner such praise is multifold; it is wildly inventive visually– employing diverse animation styles, and in structure, as the film is bracketed by the opening and closing of the travel scrapbook. It is also a film that manages to joyously capture the spirit of wonder and discovery that leads us to travel. The legitimate objection that one can make however is that at 11 min it is rather long to not have a story. The description up top is the entirety of the narrative—Dubois goes to a village and observes a local custom. It is the weakest part of the film, and if writing and story are mandatory in your appreciation of short films, then you’ll want to look elsewhere.

shot from the birds-eye climactic shot

I argue that the short film’s visual panache and heart will keep you engaged however. The animation begins chaotically—the first minute utilizes heavy-ink B&W, collage like cut outs, abstract water colors and props for animation. The familiarity of these traditional approaches is upended slightly by a 3-D framework which allows Dubois to playfully and interestingly manipulate the camera along the z-axis and in 360 degrees, exposing what, on first blush is a 2-D image, to be a careful construction of composited layers, whose perspectives can be changed depending on the virtual camera movement. Most of this work is very subtle until the closing of the film, a bravura head-long rush along the z-axis over varying mountains, fields and beaches while local music swells, which gives the closing a suitably epic and adventurous rush.

Even if one isn’t an animation-fanatic however, there is something appealing in the simple ethnographic depictions of Madagascar’s people and places. The bulk of the film’s shots are simply observations: children playing, people dancing, animals roaming. The film succeeds for the reason travel documentaries succeed, our intrinsic captivation with other places and other people. Along the way the style of the piece, the jumble of half-finished looking sketches and images across multiple styles, recreate that sometimes overwhelming sense of being fully present and stimulated that one gets when placed in such a rich, yet, foreign environment.

Madagascar is available to view thanks to that gift that keeps on giving, the Fluxus Online Film Festival from Brazil, which has allowed us to see two other French animations, The Silence Beneath the Bark (which is likewise on the Oscar short list), and Mei Ling, a film I was extraordinarily enthusiastic about when I wrote a feature review in August. (editor: the link has been updated to Dubois’ Vimeo) The hidden story in this is, to paraphrase Family Guy,  “daaamnnn France, you crazy.” Coming off a 2009 where Skhizein was our favorite film, and Logorama won the Oscar for best short animation, we sensed a trend and put together our French Animation Playlist. However in just the last week, we’ve added Madagascar, 8 Bits and Meet Buck to our little web collection. We’re finally seeing real and interesting innovation in 3-D animation away from the commercial Pixar and video game poles, and it is France with its amazing schools Supinfocom and Gobelins that are leading the way.