When Janine returns home from an evening jog she realizes something is different about her boyfriend in this darkly comedic homage to horror classics.
READ REVIEW
Next Previous

There are many reasons to love horror movies and Dylan Hamilton-Smith’s Dudecreeps somehow illustrates most of them. Written by Hamilton-Smith and his producing partner, Matthew Manville, Dudecreeps is a darkly comedic film that pays homage to horror classics, while cleverly providing a commentary on the very nature of the genre. A two-chapter saga of one night’s events, this witty exploration of how differently men and women may perceive reality could change the way you view the world, or at the very least, dating.

Hamilton-Smith held nothing back when turning the original feature script for Dudecreeps into a borderline ridiculous short film and it’s slick production values are eye candy for those of us who are hungry for spooky content year-round. From a creepy neighbor, to an ominous shower, and even a lightning storm, frankly, it’s incredible just how many horror tropes Hamilton-Smith was able to squeeze into its 20-minute duration. A short that manages to both pay respect to, and poke fun at, all things horror, with every camera push-in and use of smoky hazer, it’s clear just how much fun Dudecreeps was to make. 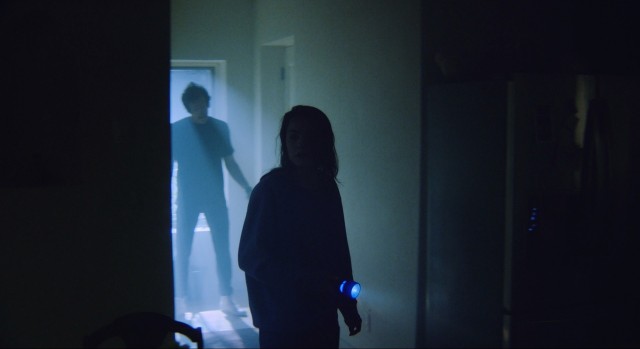 A host of horror films proved inspirational for Hamilton-Smith when making Dudecreeps.

Hamilton-Smith’s attention to detail is borderline obsessive and it’s clear just how much he and his writing partner, Manville, paid attention to their favorite horror movies in constructing this film. In some ways, their meticulous approach to craft is reminiscent of another S/W pick, Ben and Adam Callner’s Adman – a short which showcased just how deeply the directors understood the commercial medium they were critiquing. Like with Adman, Hamilton-Smith uses his deep knowledge of the horror space to subvert expectations and explore more complicated themes, all within a sophisticated two-chapter story structure.

“For both the feature and the short [script] we ended up completing there were a lot of inspirations from Halloween to the Halloween-inspired It Follows with some classic Italian horror thrown in for good measure,” Hamilton-Smith reveals to Short of the Week. “I have a deep love of Italian ‘Giallo’, or ‘yellow’ films (named such for the cheap paperback books that inspired many of the genre’s wild storylines), and I’m specifically drawn to the works of Mario Bava.”

For those of you unfamiliar with “The Master of Italian Horror”, Bava’s films were known for their rich visuals, scares, and how, at times, they could be unintentionally funny. In the same vein, Dudecreeps nails the dark comedy bucket. “It’s also hard not to be inspired by Scream when making a horror film that goes out of its way to hit a lot of the classic tropes in the first half, setting up the subversion that drove the ‘creepy dude’ core of Dudecreeps.”

“I wanted to make two different kinds of film”

The storyline, an ambitious exploration of how two people perceive an event, gave Hamilton-Smith the opportunity to exploit filmmaking’s ability to change how people feel about what they are seeing. “The idea of two different perspectives of the same weird night was incredibly fascinating to me because I wanted to make two different kinds of film,” explains Hamilton-Smith. By breaking the story into two chapters, one version in Janine’s perspective and the other in Nathan’s, Hamilton-Smith was able to try two different extremes in terms of filmmaking styles, helping the audience to bridge the gap between the two narratives themselves.

While aesthetically the same, tonally, each chapter is incredibly different. While Janine’s lens is more grounded and accurate to reality, Nathan’s perspective is willfully ignorant to all of the boundaries he’s crossed as a boyfriend. Add a dose of an otherworldly “creepy dude”, and you’ve wrapped a very real social issue within a compelling genre framework. Dudecreeps therefore commentates on the dangers of crossing boundaries and the differences between what men and women perceive to be scary in the dating world. So while Nathan is saying “it was a creepy dude”, let’s face it, he was a creepy dude, too.

Hamilton-Smith made Dudecreeps right after he left film school, with the motivation of creating a short which would “bring a little bit of joy to people”. Shot over the course of three days in Santa Fe, New Mexico, though the director admits they had “a tremendously fun time making it”, he had to overcome quite a few hurdles and ‘firsts’ to bring his story to screen.

For one, Hamilton-Smith had never worked with a VFX artist and quickly learned that it required an entirely different form of communication to translate his vision. In trying to describe textures, movement, or vibe, he quickly embraced the challenge and recalls the experience as “like playing charades in another dimension”. All that hard work certainly paid off. The stylish fight sequences were a hit amongst our curation team, as was the crazy pink squiggling goo that went in and out of Nathan’s nose – we would truly love to read how that particular gem was written in the screenplay.

In yet another first, he also worked with a composer for the first time and found it to be one of his favorite parts of the filmmaking process. HOKES, who he met back in school, was also a novice to scoring films, but together their use of piano and synth sounds added yet another layer to a film that was chock-full of horror nods. “I just love aliens so damn much and I would be remiss if I didn’t mention X-Files a big inspiration for the way we handle the score for the film as well as the Dudecreep character itself,” Hamilton-Smith explains.

Dudecreeps is a perfect example of why horror movies are so fun to watch and make. “It brings into play all the skills that you learned in the backyard with your friends making movies on DV tape”, the director reveals when describing the process – and we couldn’t agree more.