An animated cyberpunk thriller centered around a motorcycle gang of traffickers in a world of autonomous vehicles. Yuri and her brother Nyx face off against the Metro Task Force as they transport an important package to a client.
READ REVIEW
Next Previous 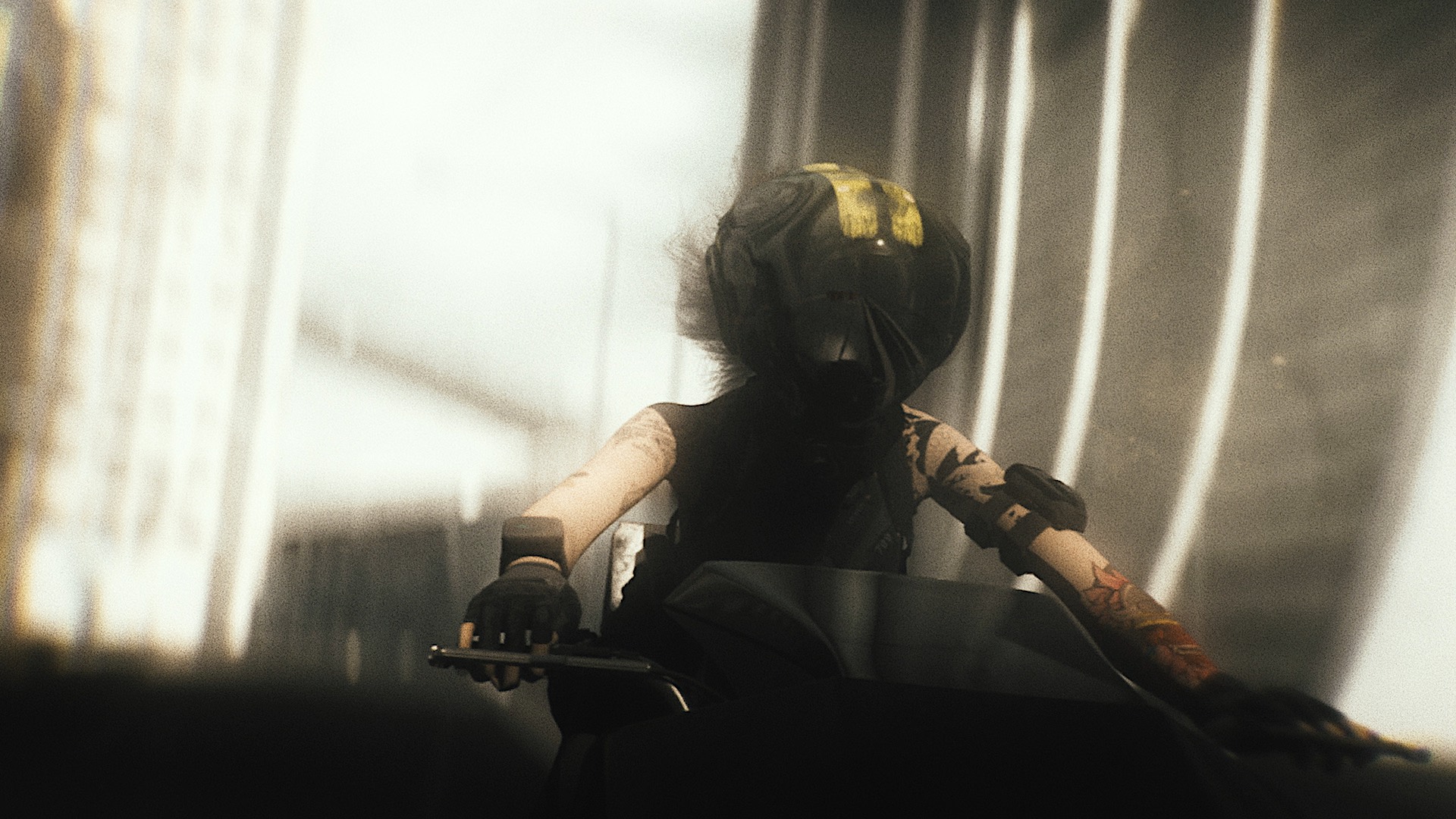 An exciting fusion of elements near and dear to my heart: motorcycles and cyberpunk, criminal gangs and family conflict, near-future technology and striking animation design, AUTONOMOUS is a visually lush action sequence designed to show off the themes and sensibilities of a proposed larger world. Imagining a corrupt corporate hegemony presiding over all of society’s transportation infrastructure after the advent of fully self-driving vehicles, the film sets against this backdrop of total control and surveillance a group of gear-head motorcycle couriers who represent a beacon of freedom as they traverse the grid and escape detection.

As an excerpt from a larger idea, and clocking in at just over 4min, this is strict proof-of-concept fare, which means those hoping for narrative depth will be disappointed. AUTONOMOUS is visual eye candy first and foremost, with hints and handwaves towards the more expansive pitch that its creators, Joe Sill and Matisse Tolin, have put together. COVID is, in part, responsible for its production, as the creators, both well-established in commercial and live-action filmmaking wanted to find new ways to create the stories they love as an alternative to in-person production during this time. Describing their motivation, Sill informs us that “We’ve had the story outline and bible for a long-format version of this project for some time now, and early in the pandemic we dusted it off and began to wonder what a short film excerpt of it would look like.” Drawing from familiar inspirations such as the anime touchstone Akira, as well as Western influences like The Departed and Robocop, the pair set to work at distilling their expansive outline into a concentrated form that could relay the gist of their vision, but also be executable under these trying circumstances. While the duo cite mainstream works, I am naturally reminded of a short, Wes Ball’s Ruin, which similarly took a motorcyclist on a CG sci-fi journey and served as a calling-card that resulted in Ball helming the popular Maze Runner franchise.

While I enjoy the themes of the expanded pitch, proof-of-concept shorts are a dime a dozen, and the differentiating factor for AUTONOMOUS is its visual sensibility. It’s really fresh. Dark, with an ethereal glow to its lighting and an intense grain to its images, I was struck by the aesthetic. Having watched hundreds of hours of CG animation, I’m sensitive to any changes in design and palette I encounter, and AUTONOMOUS isn’t quite like anything I’ve ever seen.

Much of this is attributable to Sill, who, in the 7 years since we featured his student short, Expo, has become an in-demand image-maker with hi-profile commercial work for Apple, NASA, Nike, and Tesla. With his feature film debut, 2019’s Stray, Sill dipped his toe into longer formats, and in teaming up with Tolin has found a partner with similar interests as well as experience as a screenwriter, pitch developer, and producer.

Could you see AUTONOMOUS as a longer-form series? Would you be excited by the prospect? The world of non-comedic animation for adult audiences is still sparse, but in a world where LOVE DEATH + ROBOTS is a hit on Netflix, and Undone debuted to much acclaim on Amazone Prime, there is new hope that mature 100% animated projects like AUTONOMOUS may have a future on a television screen near you.