A tragicomedy about a sex education teacher who lets his personal problems get in the way of his lesson.
READ REVIEW
Next Previous 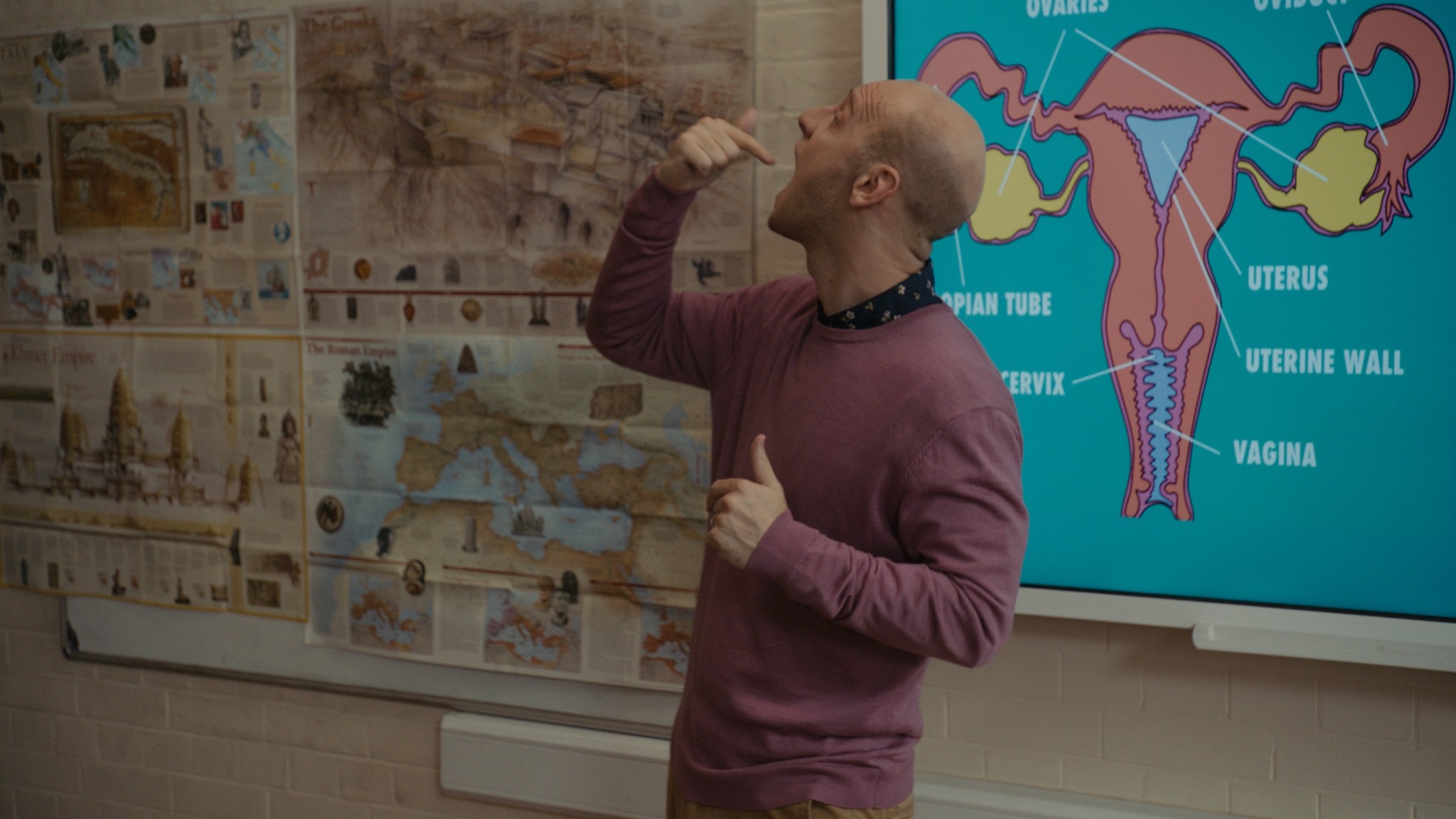 Set in a classroom full of obnoxious teenagers, Ed is a sexual education teacher, equipped with his trusted suitcase full of dildos and condoms, ready to spread the wisdom of safe sex. When his students’ prying questions get too close to home, Ed struggles to keep his personal life separate from his work and his class plan and his dignity begin to crumble all around him. This 12-minute tragicomedy delivers the hilarious, beat-perfect comedic gems you might expect given the premise, but Sex Ed goes deeper, as its reverberating climax looks set to leave you with a lump in the back of the throat (much like felatio 😉 ).

Sex Ed is a directorial masterpiece, which includes a single shot lasting almost 9-minutes, handled by Seabright with the lightest of touches and carried through by the remarkable performance of Mark Weinman (Ed). The inspiration for the film came when Weinman and Seabright were discussing his experiences of working as a teaching assistant and a time he once sat in on a sex ed class – which sparked the idea of a teacher as a character and the class as a pressure cooker situation.

“We loved the idea that this is a job where you talk about incredibly intimate and personal questions with young people who are often totally out of their depth and putting on a front. We thought: what would be the worst day for someone to have to do that job? And the idea of Ed’s personal problem getting in the way of the class emerged. We were incredibly drawn to throwing him into a really tough situation, then watching him have to deal with the onslaught from the kids and finally watching him unravel” – Seabright explained.

“What’s the first thing you do when the penis is erect” the teacher asks. “You spit on it” comes a swift reply from a student.

Sex Ed is unapologetically funny. The jokes, one after another, land with perfect trajectory, just like the condom that thwacks Ed in the face. “What’s the first thing you do when the penis is erect” the teacher asks. “You spit on it” comes a swift reply from a student. It’s all painfully relatable, but there is more than cringey nostalgia at work here. The film is also compelling and deeply touching, and you might find yourself creasing up one minute and holding back the tears the next.

“We wanted to explore the expectations and pressure that people, particularly boys and men, can put themselves under. We loved the parallel between Ed and his young students, all desperately trying to project an image of cool and control, desperately trying to hide their pain and vulnerability” – the director shared with us.

Going for a single shot for the majority of the film was a brilliant (if totally insane) decision, which required meticulous planning and took 9 takes, the last of which made the cut. It gave Weinman the opportunity to deliver an electrifying performance and the audience to experience it uninterrupted. And the result is mesmerising.

In an interview for Directors Notes, Seabright shared that she has just finished working on a coming-of-age short film called Strange Days and is also about to start working on an “ambitious” short, about two women in their early 60s who were best friends when they were teenagers. Alice is also developing several features and TV projects.