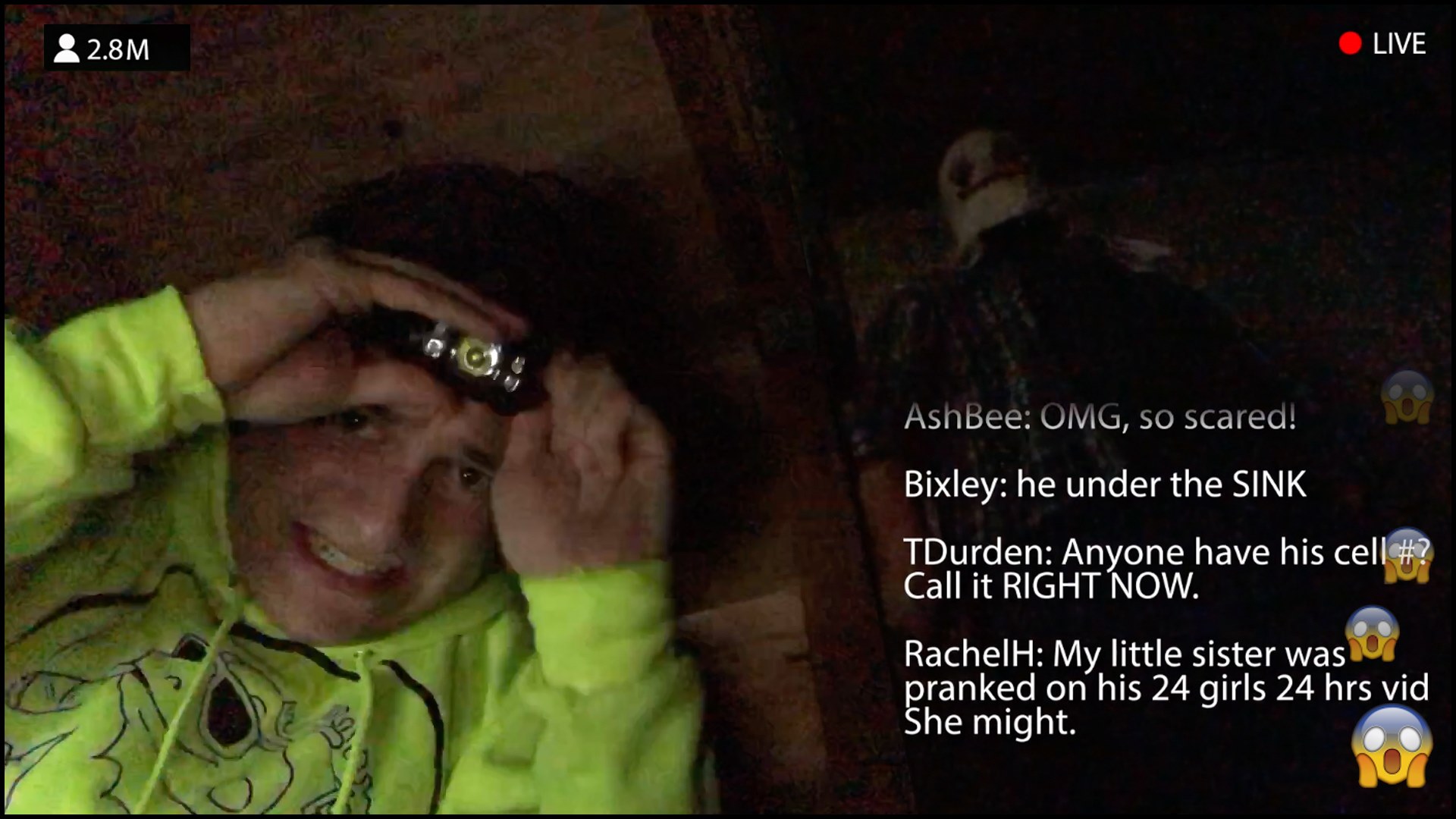 At once a clever spoof of social-media era faux-pas such as l’affaire de Logan Paul, today’s online premiere, #chadgetstheaxe, also excels as a purely enjoyable horror flick, delivering the goods when it comes to executing the mechanics of slasher films: from its expert manipulation of tension, to the subtly moving background elements, and, of course, the pants-wetting jump scares. Pull back however, and writer/director Travis Bible has an even grander statement in mind, layering in an additional element of social commentary that is thought-provoking and verging on profound. The conceit of the film is that it is captured in its entirety as a live-stream from a celeb-bro vlogger, Chad Ryan. The interplay of Chad and the stream’s absent, yet ever-present audience (given voice via on-screen chat elements) satirizes the whole of online society—shining a light on the vicious feedback loops of influencer culture. Chad dehumanizes a dead person, but the live chat audience in turn dehumanizes him. Who is the villain now?

Ok, trick question—the answer is the axe-wielding serial killer. #chadgetstheaxe is not quite that deep, but, to its credit, it also doesn’t really pretend to be—the short film is briskly-paced and enjoyable, scary and adrenaline-inducing, and despite the satire being somewhat surface-level, when the piling-on of Chad reaches its bloody apex, it is still immensely disturbing in a way disconnected from the viscera on the screen. Like many great films, Bible is able to seamlessly weave urgent, contemporary themes into his narrative in a way that stays true to the proven pleasures of the genre, but also, for lack of a better phrase, “makes you think”.

In analyzing the pieces that Bible draws together, first we must look at the spoof of its premise—it almost doesn’t work as a spoof at all! Chad Ryan is buffoonish, yet his dumb antics, his blithe chasing of online affirmation in the form of social media engagement, and the savvy capitalization of his celebrity via merchandising are actually…just accurate reflections of a contemporary YouTube reality? Stunts and pranks and shamelessness come with 8-figures per anum nowadays for those that are good at it, poor taste be damned.

“Instead of just wondering why Chad would do something so distasteful, also question why so many people are watching him.”

Yet Ryan is not wholly unsympathetic. The influencer and their audience are symbiotic—they mutually feed, and feed off of, each other. Chad is a dirtbag who tries to increase his view count by making offensive content. Yet would he be egged on to such antics, would he engage in such poor taste without those eager to consume this content? As Bible succinctly relates, “Instead of just wondering why Chad would do something so distasteful, also question why so many people are watching him.”

Chad is played by Spencer H Levin in a really commendable performance (after all he must also serve as the film’s camera man). Levin really nails his character’s crass, jocular nature, but also leaves room for his vulnerability. There is a false bravado to Chad that leaks out at moments, and the naked need embedded within his solicitations for audience validation is alternately pathetic, poignant, and almost tragic—and that is even before the film takes its horror twist.

The logistics of that performance are mind-boggling as well. Bible is an accomplished editor of TV, his most recent credits being on Netflix’s acclaimed Last Chance U. But editing a film such as this, where the action is a simulated single-take, is nearly impossible. Levin’s camera duties, combined with the necessity for long takes in order to fake the unmediated nature of a stream, means that quite a lot hinged on Levin. To get synced up, Bible employed a rehearsal shoot to refine the script and blocking process. Based off the result, he subsequently cut about 30% of the script. This prep work paid off—it’s rather remarkable how invisible the production itself is while watching, as the performance, the staging, and the writing combine to sweep you into its flow and kill that critical-thinking aspect of your mind.

The film’s complexity stretched past production into post as well. #chadgetstheaxe engages on two distinct, but interrelated, narrative levels simultaneously—there is the explicit action onscreen, but also the narrative of the chat. Bible described his thoughts on this bifurcated approach by saying to us that, “I wanted to make sure that if a viewer wanted to focus all their attention on the text the whole time it would make sense. The people in the chat kind of have their own arc too, as the chat is populated by more and more Chad haters and the viewers turn against him”. There is a lot going on in #chadgetstheaxe, and it’s a testament to the work Bible and his producer, Michael Nicholas, did in post that the film does not feel overstuffed, drawn out, or that it’s key moments feel blunted by mismatches between these two arcs or the division of the audience’s attention.

In total, #chadgetstheaxe is quite a marvel, expertly balancing its jokey premise and genre tropes to deliver a propulsive product that hits you in the gut, but also the head. The film just had its world premiere earlier this month, playing at the Austin Film Festival and Screamfest before debuting online today, just in time for Halloween. Bible tells us that he is currently working on plans for feature adaptations of both this film and his previously featured short, Exit Strategy. If you like this, we need your shares on social media! Let’s get this film into the Top 5 of Halloween season streaming short films! Let’s finally top 1M concurrent viewers! S/W-hive! We can DOOOO THIS!!!