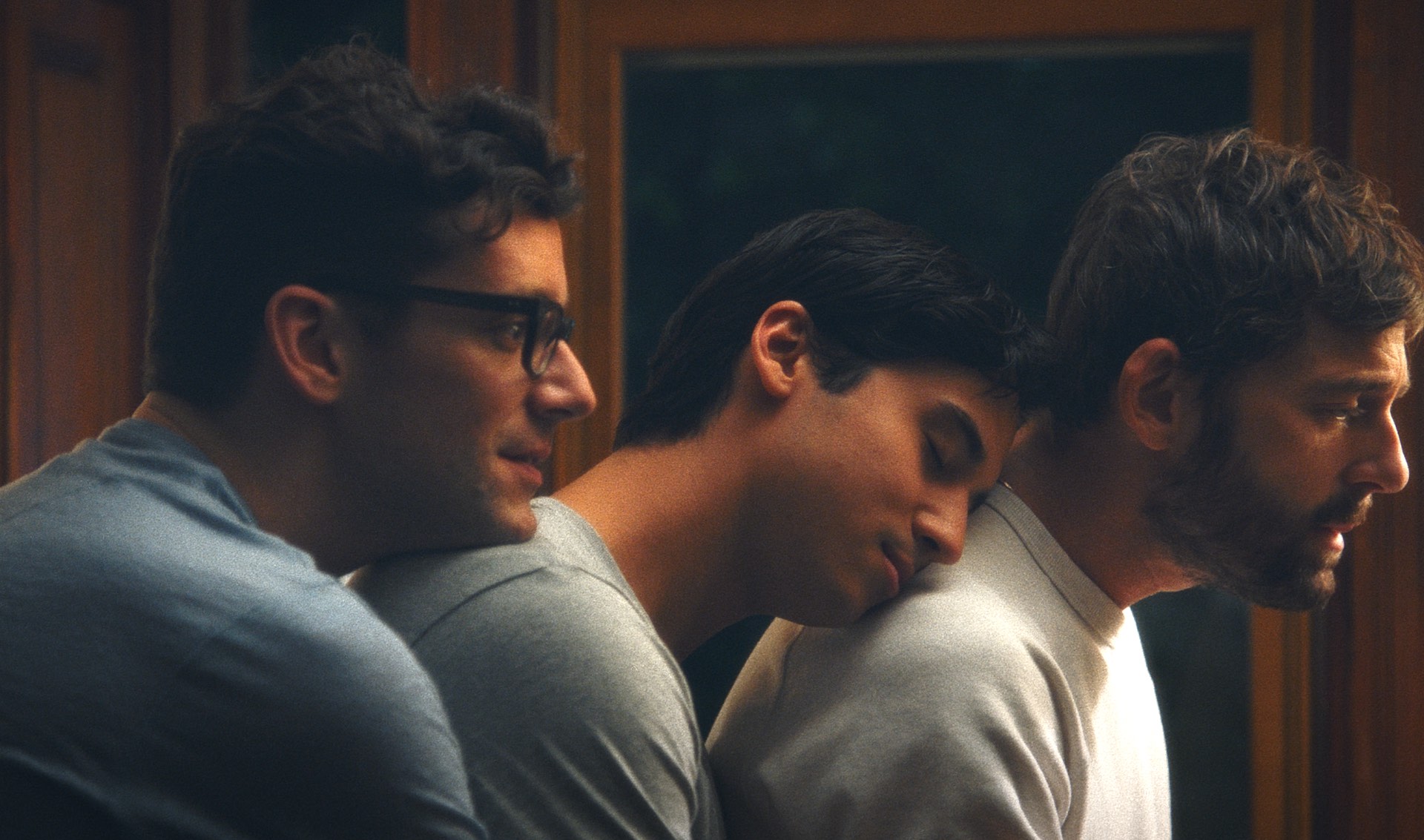 When I watch the films of Matthew Puccini, I notice I’m struck by an initial feeling of underwhelm—“Is this it? Is this all that happens?”. Yet a remarkable thing occurs in the minutes, hours, days after that initial viewing—the films stick with me. They tickle my brain and I desire to return to them, as snippets of particular scenes or subtle gestures from their characters embed in my consciousness and hint at a significance initially brushed aside. I felt that way about his previous short The Mess He Made, and it is equally true for his latest, the Sundance-premiering Lavender—a gay drama about a not-quite love triangle between a younger man and an older married couple.

We don’t talk enough about what an enormous ask of an audience it is to watch a short film. Sure, it’s not a big commitment of time, but it is of emotional energy. Consider that it is very rare that we come into any viewing experience blind anymore. From the film you buy a ticket to in the theater, to the TV show you select out of your streaming queue, you’ve generally been primed to understand what to expect—via the official marketing of the project, to reading the critical appraisals, from the reception of audiences on social media, to the testimonials from your friends, you generally know what you’re going to get in terms of plot, tone, structure and subjective quality.  Consumers of shorts by and large don’t have that luxury—the films don’t have much chatter surrounding them, are of widely varying quality and approach, and the tastes of even trusted gatekeepers and tastemakers can be very wide and peculiar. It can be rollercoaster, and is part of why, even though I’m a “shorts guy”, I detest shorts block screenings that run any longer than 80min.
In our case, as a team that watches thousands of shorts a year and are sensitive to these challenges for audiences, it’s hard to prevent a certain clichéd worldview from calcifying. You talk about “hooking audiences early” and “earning buy-in”. Your appraisals begin to be biased heavily towards plot and easily recognizable pleasures: “does this look good?”, “is this ending satisfying?”. That kind thinking is detrimental to a film like Lavender however, which is far less about the what of its plot, than the how.
With a mere handful of shorts to his resumé it’s slightly outrageous to say it, but I think Puccini is already one of the best filmmakers, in shorts, TV, or features, at depicting the interiority of his characters. Lavender is nothing if not a collection of subtle cues, unspoken but no less present, that communicate a wealth of emotion under the surface. He is a master of coaxing, capturing, and emphasizing longing looks, tremulous overtures, stoic rejections, and poignant tenderness. An arched eyebrow here, an extra beat to the edit there. In preparing this review I revisited the short, the 5th time now watching it (one of the great aspects of an online release!), and it’s remarkable how a film that can feel rote upon first viewing just unfolds like a flower with subsequent attention, revealing rich subtext and nuance.
It’s speculation on my part, but I wonder if Puccini’s background as a gay man, and the explicit reflection of this experience in his dramatic material contributes to this fine calibration. Gay culture is famous for its sensitivity to non-verbal communication. In the heyday of cruising and the closet, possessing the skill could quite literally be a matter of life and death. Puccini’s work dives into a contemporary gay culture that is in flux however. The plague has largely passed, marriage equality is the law of the land, and cruising has been replaced by Grindr. These shifting norms and expectations are the subtext of Lavender, as the complex relationship between its youngest member and the older married couple can be seen as a symbolic of a transition from a more freewheeling, licentious era to one that embraces hetero-normative convention. It is however true to experience. Writing to us Puccini relates that he had, “…spent significant time with another gay couple in 2017 and was struck by the maturity of their relationship and their lifestyle. It took me a while to realize that the reason I was so drawn to them was because those were things I wanted for myself.”
For straight audiences it can be eye-opening and feel a bit prurient, but for Puccini he hopes Lavender can feel truthful and honest to queer viewers, and more than anything show that “…there is a space for queer stories to exist somewhere between camp and tragedy, where quiet naturalism and tender romance, no matter how brief, can be enough.” In endeavoring to achieve this, the film takes on an elegaic quality, mourning an end, but avoiding the histrionics of recrimination, jealousy and pettiness that define usual depictions of threesomes and unconventional relationships, allowing Puccini to examine, with tendnerness and grace, “the new families, both literal and figurative, that gay men create for themselves as they stumble toward intimacy.”
After premiering at Sundance 2019, Lavender was picked up by Fox Searchlight in one of the first acquisitions in their new “Searchlight Shorts” series, and today we’re embedding their YouTube. Click through to access their channel which has several other shorts of sterling pedigree available to watch. As for Puccini, he just finished a brand new short entitled Dirty, about a pair of high school boyfriends who cut class to lose their virginities, and is currently writing his first feature, which he says is not a direct extension of Lavender, but which presents overlapping themes and a similar sensibility.
The Website of Filmmaker Matthew Puccini
LIKE TWEET