A delightful and innovative adaptation of a classic riddle, a chorus of voices attempt to investigate a puzzling suicide: A man gets off a boat. He walks into a restaurant and orders albatross soup. He takes one sip... pulls out a gun, and shoots himself to death. So...why did he kill himself?
READ REVIEW
Next Previous 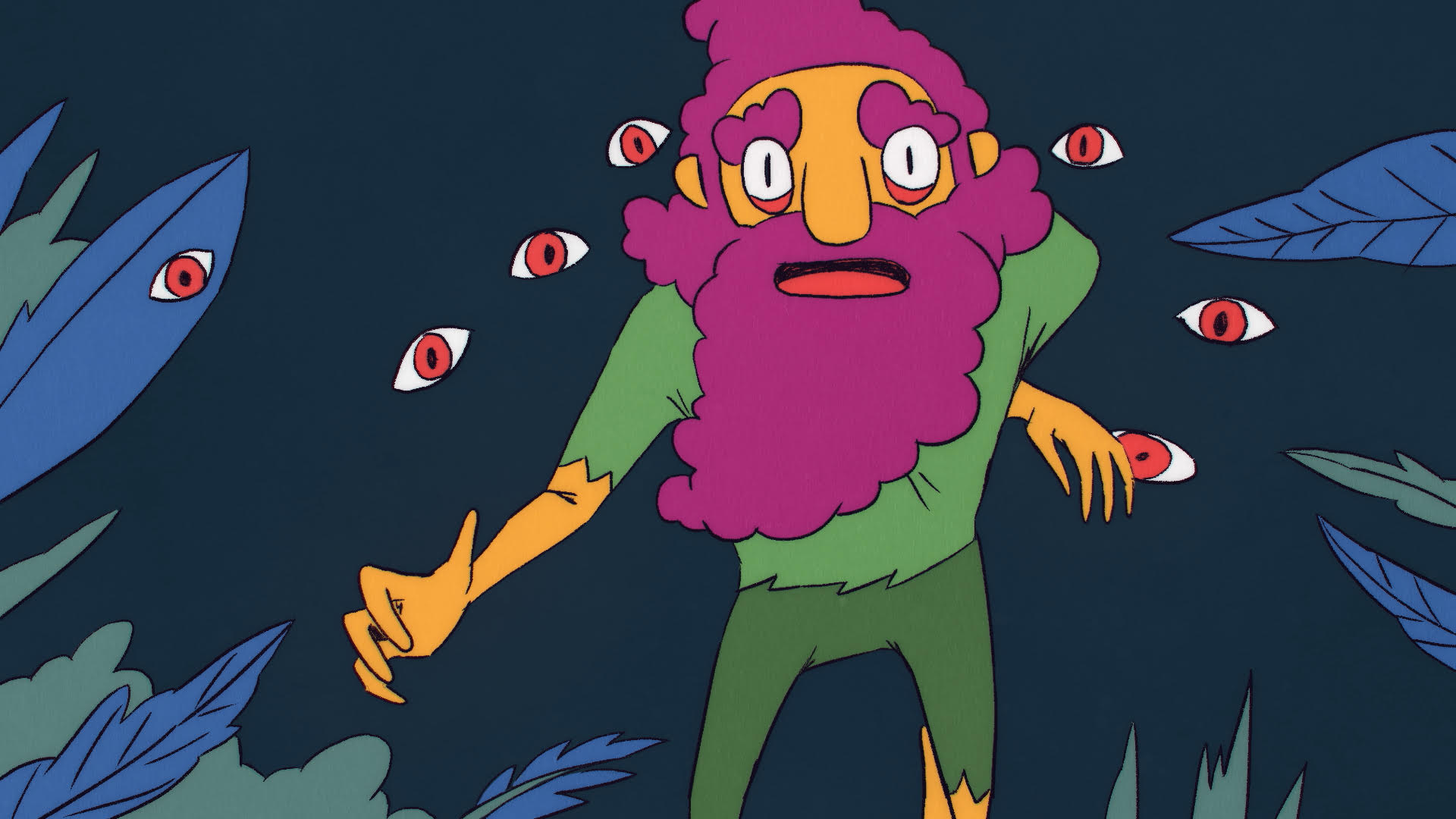 My favorite film I saw at Sundance 2019 is online today. Albatross Soup is a delightfully psychedelic animation, an intriguing murder-mystery, and a genuinely innovative formal approach to non-fiction filmmaking. It’s weird, original, and a whole lot of fun.

The film is a adaptation of a classic riddle, an exemplar of a genre known to puzzle connoisseurs as “situation puzzles” or “lateral thinking”. The riddle relies on a puzzlemaster who is able to supply answers to yes or no questions. A single, or group of players, is presented with a scenario, and through infinite questions and leaps of logic, tasked with arriving at a set answer. In Albatross Soup the premise goes like this:

A man gets off a boat. He walks into a restaurant and orders albatross soup. He takes one sip… pulls out a gun, and shoots himself to death. So…why did he kill himself?

If you’ve heard this one, I’m sorry. There is plenty of merit to the film outside of the puzzle itself, but playing along is half the fun! I wasn’t familiar with this riddle before, but quick googling reveals online references to it at least as far back as 1999, and it has been a favorite on puzzle sites, webforums, Reddit, Quora, and other assorted destinations in the years since.

Director Winnie Cheung was introduced to the riddle from a friend: Gene had been interviewing for his PhD at UCLA Neuroscience, and the students of the department, obsessed with mapping out the functions of the brain, were drawn to these sorts of puzzles. Bringing it back to New York, “Albatross Soup” took on a classic sort of virality, as it became a favorite party game—once solved, players couldn’t help but want to share it with new friends. Cheung an editor and post-production professional living in Brooklyn, was determined to adapt it to film, but how? Figuring out the answer took the next three years of her life.

On the surface it’s a killer idea—the material had proven itself a crowdpleaser in several contexts, and there is an undeniable appeal to the riddle, both in its mechanics, and its dark morbidity. The core insight of Cheung’s was to maintain the pleasure of the format by incorporating unscripted actors to recreate a facsimile of the in-person experience of solving the puzzle. But this form of adaptation was far from a straight-forward proposition. Film is a passive medium, so being denied the interactivity of its traditional party-setting robs the puzzle of a lot of its charm. Furthermore, how long should it/could it be? Solving the riddle in-person can take a long time. Additionally, with a group of friends you’re entertained by the familiarity of those bonds, the in-jokes you share, and a communal joy d’esprit. That would necessarily be absent in a film.

Addressing these challenges would seem, dare I say, quite the…riddle? Cheung tackled them thoughtfully via casting and editing. She set up groups of 4-6 people and ran them, unrehearsed, through the puzzle, recording their responses. Largely drawn from her circle of friends, whom she could rely on being spontaneously entertaining, she nonetheless found the approach lacking mid-way through. Enlisting Alex Young, now a podcast producer for the NyTimes’ smash hit The Daily, they supplemented the cast with participants from a wider, more varied pool, and were especially successful with kids. This paid off, as the team were able to get the kind of auditory and character diversity she sought.

Pulling it together is the trick however. Cheung, in writing to us, describes that “We took a traditional documentary approach to the editing process. Every riddle session was transcribed. We pulled lines based on themes, characters and plot. We started with a paper script and worked our way up to an assembly. At first, I tried to edit it all myself, but half a year into the process, I knew that I had to bring another editor to move forward. I asked my friend Tessa Greenberg, a talented comedic director and editor to come on board for some outside perspective. We were able to bring it to a fine cut within a few weeks.”

As an animation, the participants don’t get face time, and with the cacaphony of voices, you don’t really form bonds with them as you might when playing with people in real life. There is a version of this film that prioritizes a participant-centric approach, and finds pleasure in the observation of people reacting to a situation, à la the celebrated NyTimes Op/Doc 10 Meter Tower. Cheung instead opts to make the puzzle itself the center of the piece, and rather than bemoan that loss of character connection that this decision precipitates, she leans into the limitation. The distinctive tenor, and unique personalities of her cast thus bounce off each other in fun, chaotic ways as she ruthlessly curates a “best of” collection of quips and angles that dramatically improves the story’s entertainment efficiency.

Editing was not only about highlighting the best performances however. Cheung and the film were invited to partake in our inaugural S/W IRL event earlier this year, and on stage I proffered the idea that creating a series of films out of this puzzle format could be a real dynamite proposition. However Cheung replied that she didn’t see the potential. To her mind Albatross Soup was one of a kind, because, transposed to film, the director must—through sheer staging and editing—conform the format into a coherent journey that can duplicate more traditional film storytelling beats. The source material was uniquely rich because of its inherent drama and its capacity to be molded into a compelling linear story, even if it is then chopped up and presented somewhat non-linearly. Structure is one of those things that we’ve so internalized via media that we often don’t really notice it unless it’s off, but wrangling these massive unscripted recordings and using them to force the potentially sprawling puzzle into a presentation that satisfies on a narrative level is actually a masterclass of documentary technique, and might be the film’s most impressive accomplishment.

Ten paragraphs in, and we still have yet to touch on the animation itself. Hopefully you’ll indulge me this extended review, as this is a film that I’m sure we’ll be discussing come awards time, but in the midst of digging into this film and all the impressive stories of its creation, one of the most astonishing details I learned is that Cheung had very little background in animation at the outset! Cheung went back and forth on whether to execute the film in live-action or animation, but, in the end, the dreamy, non-sequitur quality of the story pushed her decision towards animation. Never having directed animation before, she was drawn to learning new processes and storytelling techniques that came along with medium, though it definitely caused issues with bringing collaborators onboard. Eventually she was able to bring in skilled professionals in illustrator Fiona Smyth, and animation director Masayoshi Nakamura onto the project, after she and her husband, sound designer, Dan Rosato, fleshed out the auditory world and put together an animatic as a proof-of-concept. The result is lovely—colorful and fluid, that draws equally off of vintage 60’s psychedelia, and the minimal morphing styles of contemporary motion design.

We’ve spent a lot of time on process in this review, because when something genuinely innovative is produced, I have a strong tendency to want to deconstruct it. Albatross Soup draws off of classic source material, and combines familiar approaches, but the the combination of elements feels new. The idea of expanding film’s repertoire into puzzles and games naturally appeals to me, the film I produced several years back, and which my S/W co-founder Andrew Allen directed, notably incorporated hidden codes, which provided a fun layer of interactivity for audiences. We strongly believe that one of short film’s highest callings as a medium is to encourage this kind of experimentation and play, and despite what Cheung told us, I hope this is the birth of a new, micro-format that others iterate within.

As for Cheung, after a successful premiere at last year’s Fantasia Film Festival and notable stops at Sundance and GLAS 2019, Albatross Soup comes online for a larger audience to discover and enjoy. Going forward she is developing her first live action feature—a psycho-erotic thriller about a woman in an all female motorcycle gang whose repressed sexual trauma manifests as a slimy swamp monster.