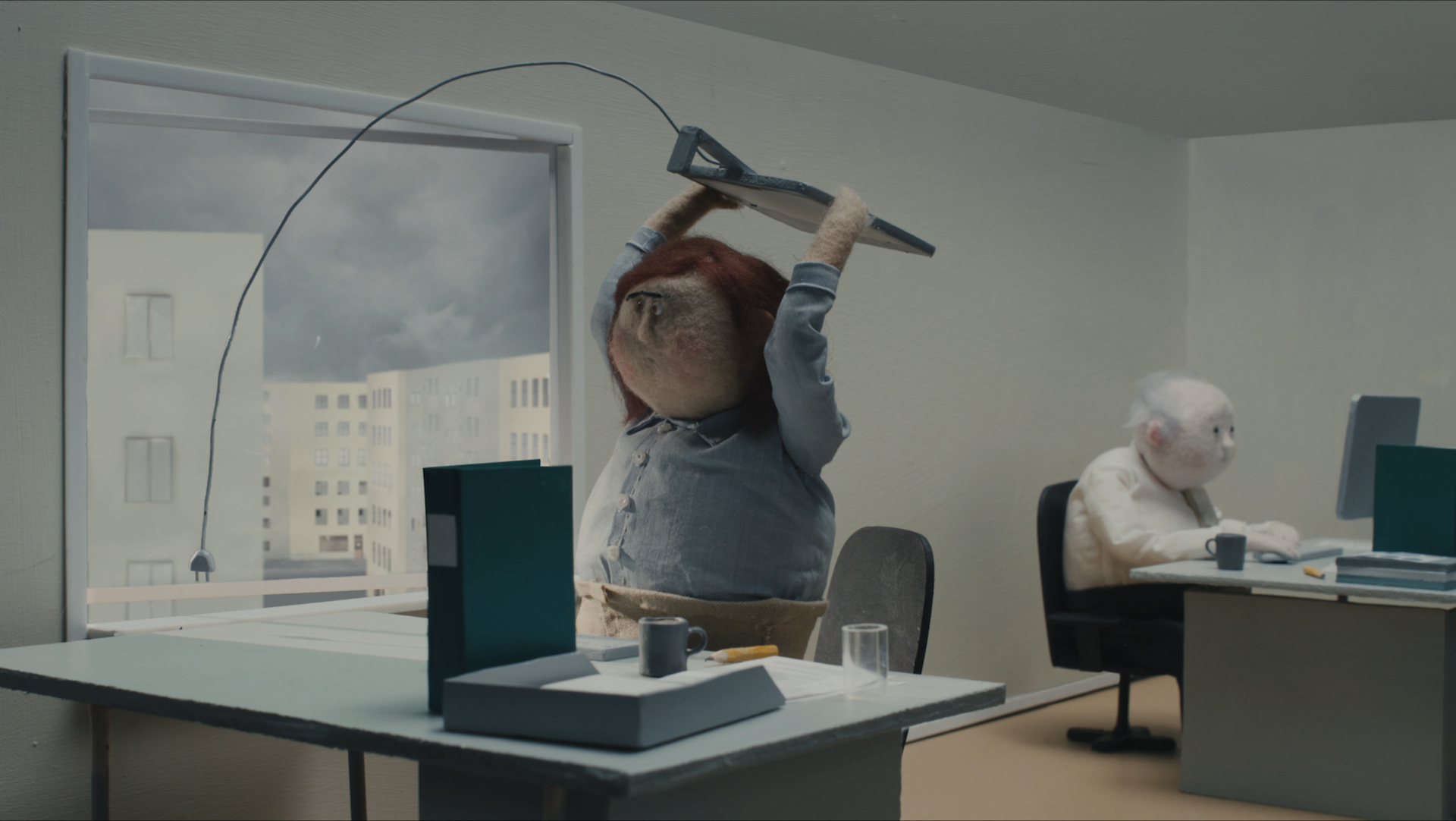 Have you ever had the sudden urge to do something bad? Something you know is wrong, but you can’t get the thought out of your head! From pushing someone down the stairs, to sniffing a stranger’s hair, animator Anna Mantzaris explores some of these dark urges in her hilarious and relatable Royal College of Art short Enough.

Presented as a series of vignettes where everyday people have had enough of their situation and decide to act upon their internal compulsions by doing what they know is wrong, Mantzaris was inspired to tell such a story after moving to London.

After experiencing the crowded streets and heavily congested underground, she started to sense “a sort of irritation in the air”. And as Mantzaris spent more and more time commuting around the city, witnessing the many employees looking uncomfortable in their workwear, she herself started to have dark thoughts as she started to imagine what these people really wanted to do, if they could act however they wanted.

“I liked this idea of the quite content people doing exactly what they wanted”, Mantzaris admits discussing the inspiration behind her film. “To portray this feeling the city and the everyday life can give you sometimes, I found it both funny, liberating and a bit sad at the same time, my favourite combo of moods”.

Working with no real story or script, Mantzaris approached the pre-production stage of her short very differently from how she would normally work. “I was brainstorming many moments and short ideas”, she says when explaining how she made Enough. “I tried to select and sort them, creating some sort of order and story curve, with more and more escalation and more and more horrible stuff, and then a sort of rounding down to more of a relief”.

Created in around five months, including a break as she went to animate on Wes Anderson’s Isle of Dogs, Enough sports a very tactical aesthetic, with Mantzaris using wool and felt to create her characters. Inspired by the look of S/W favourite Oh Willy…, the animator had worked with the materials previously in her festival favourite But Milk is Important.

Making the characters so she could easily change their hair and clothes and reuse them throughout production, the filmmaker aimed to make it so it looked like there was a lot going on inside their heads. “I think the characters look a bit like how I can feel sometimes, on a bad day” she jokes, but there is something strangely human about them. Despite their somewhat “cute” appearance, their odd body shape and palpable feel does make them feel like real people, only adding to the relatability of the piece.

We don’t feature many films as short as Enough, so it’s really to Anna’s credit that she’s created a film that feels so memorable and engaging, in just two minutes. Enough was her first year film at the Royal College of Art and she has recently completed her grad film Good Intentions. Sporting the same aesthetic as her first year film, the director describes this short as being “more dark and narrative” than her earlier film – you can catch the short playing London Film Festival’s ‘Real Horrorshow’ strand this October.