An ambitious journalist challenges the leader of a violent vigilante group to a high-stakes drinking game that may score her a scoop or a bullet to the head.
READ REVIEW
Next Previous 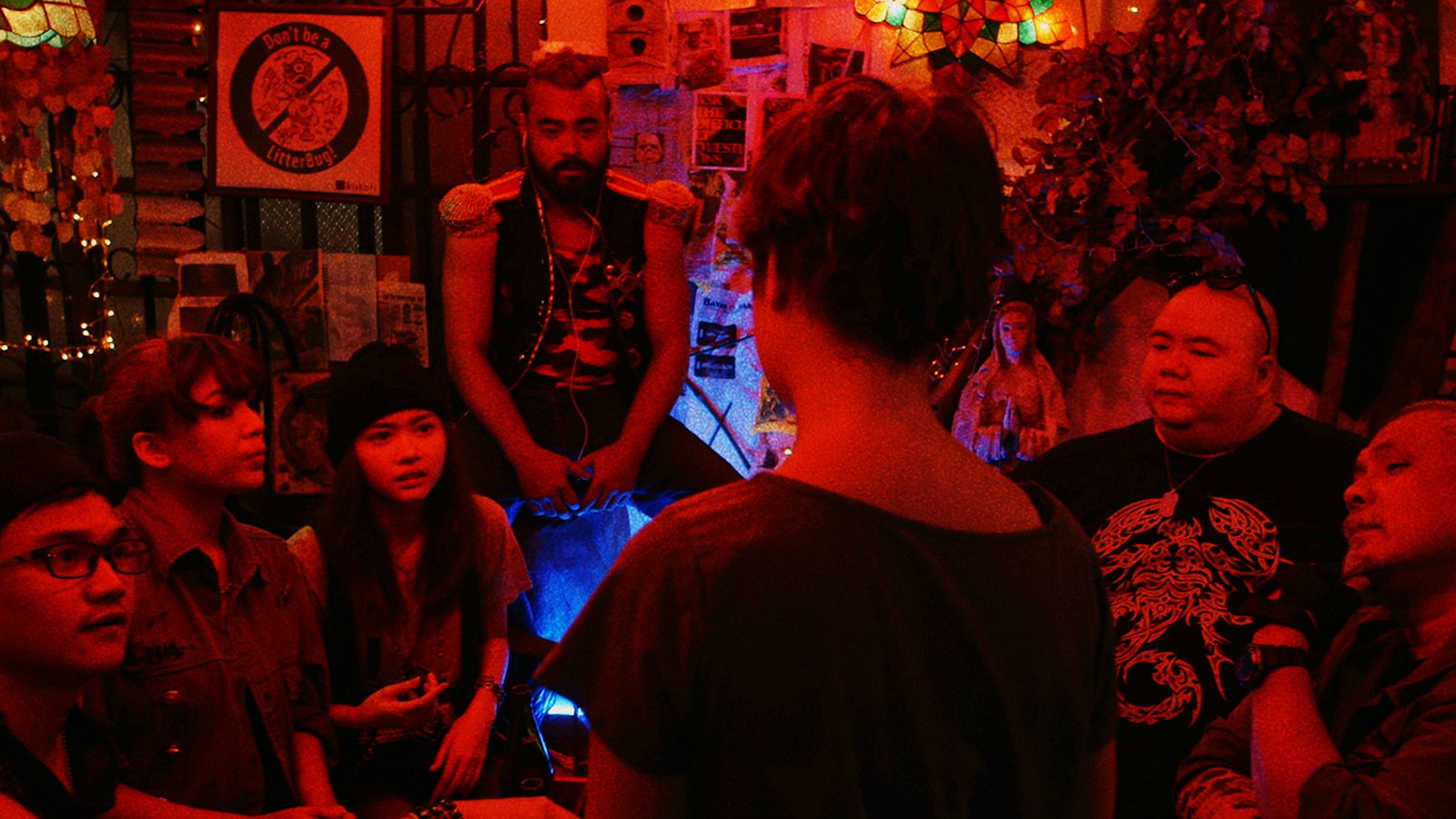 Like a lurid funhouse mirror reflecting back American archetypes only slightly askew, Dean Colin Marcial (Sea Devil, The Midnight Service) returns to Short of the Week with Manila Death Squad, an energetic and stylistically brash short that is in tonal tension with its deathly dark, and political, subject matter.

Loosely based on stories of the murderous Davao Death Squad told to Marcial by his grandfather, the group was informally sanctioned to carry out vigilante violence under the city’s outrageous, but charismatic, mayor Rodrigo Duterte. This 2016 film has proved eerily prescient however, as Duterte has subsequently ascended to the presidency of the country, implementing his regime of extra-judicial killings on a national level. Today marks the 2 year anniversary of Duterte’s assumption of power, and Marcial’s film reads as a searching political inquiry disguised as a gangster thriller— attempting to make sense of his native country’s embrace of authoritarianism through the context of the current New Yorker’s adopted country, and the inextricable connection between the two, forged by their shared colonial past.

Those are weighty themes, and often in the film they get buried under visual exuberance. Shot in a bar with garish neon lighting, and featuring rapid-fire dialogue translated into day-glo subtitling, the film centers on Olivia (Annicka Dolonius), an American journalist of Filipino descent as she confronts the famed Manila Death Squad in the midst of of a round of the drinking game “Kings”. Requesting an interview, she is initially dismissed by the group, but holds her own as they knock her back, boldly inserting herself into the game and upping the stakes. The kid’s got nerve, but is she playing out of her league?

An Indiewire mention of the film, in the context of its screening at Miami’s Borscht Film Fest, describes the short as a “an electric lover letter to Tarantino”— and like the celebrated auteur, Marcial’s cinematic cribbing is far-reaching. The Death Squad is lovingly conceived, maximizing personality in quick strokes via casting and costume design (each of the members gets their own introduction caption like a team assembled in a heist movie or an indie-punk Wes Anderson). None make as big of an impression however as Rufio (Sid Lucero), the group’s charismatic leader. Rufio oozes cool, and again, like Tarantino, the glamorization of the gangster’s magnetic persona troublingly blurs audience sentiment, upsetting those who search for a clear moralistic divide with which to align themselves.

Rufio is cool and smart, and the centerpiece of the film boils down to a thrilling battle of wits and nerve between him and Olivia, peppered with penetrating arguments surrounding the Philippine’s political past. It is this blending of the outlaw and the intellectual that has given the “revolutionary” its romanticized role in popular culture—but as we all know, many of history’s most monstrous crimes have been at the hands of revolutionaries.

If our feelings towards Rufio are ambiguous, so are those surround Olivia. She is brave, but to what end? The audience avatar, she is meant to be the conscience of the film, but her attraction + repulsion is a key element to the dramatic tension of Manila Death Squad . Like films such as Silence of the Lambs before it, there is an implicit sympathy to our hero’s encounter with the “villain” that tests our trust. The cat and mouse aspect to her’s and Rufio’s encounter is meant to echo innumerable cinematic pairings that precede, hinting at a potential conversion to the dark side.

Manila Death Squad leaves us hanging in that regard—though it ends in a devastating act of violence, its core relationship remains in an open-ended state, and as such it feels like an invitation to a more extensive treatment. Marcial has yet to commit to a furthering of this world, yet through a Tribeca film grant he is continuing to explore stories within the Philippine’s diaspora. He is simultaneously pursuing a series pickup for The Midnight Service, while working on a short film to further his development of his TFI feature film The Green Guerrillas.