Does that tendency during pitches where you describe a new project by saying “it’s like X meets Y!” have a formal name? I know it’s reductive, but it persists because the kind of shorthand it enables is useful. At only 7min long, I’d be pleased if you watched Apocalypse Now Now, a brand-new fantasy proof-of-concept premiering through Short of the Week today, merely on the strength of my recommendation. But, would it help to describe it the way the PR for its source novel does, as “Tarantino meets Neil Gaiman?” Would its exciting pairing of a degenerate teen protagonist and a hidden underworld of South African supernatural monsters be more appealing if I say it’s Harry Potter mixed with District 9?

Whatever the analogues one arrives at, Apocalypse Now Now is a proof-of-concept of rare quality and pedigree. Based off a celebrated series by author Charlie Human, this short is a brief introduction to the world of Baxter Zevcenko (Garion Dowds). A snarky, monster-porn-dealing teen, Baxter might be a serial killer. His girlfriend, Esme, is missing, and he’s the prime suspect. To clear his name, he’ll turn to Cape Town’s grizzliest, drunkest bounty hunter, Jackson ‘Jackie’ Ronin (Louw Venter), a supernatural warrior who helps unlock a conspiracy across time and space.

The goal for the Apocalypse Now Now team is to build a groundswell of support for a feature version of the story, and, as is so often the case with these kind of teasers, the short is simplistic on a narrative level. It develops only a single representative scene of Human’s work, though the use of narration by Baxter early in the film does a large amount of expository heavy-lifting to set the context. If you dig these kind of speculative works however, you’ll find a ton to like about Apocalypse Now Now. With proven source material, the tone is gleefully vulgar, full of gore, drugs and foul language. Baxter as a character is instantly understandable, a jaded, wise-cracking teen, he is charmingly nonplussed as the ontological nature of his world falls down around him. Gorgeously shot, the film succeeds both on the practical and VFX levels, using extensive set design and its grimy South African setting to great effect. The VFX are prodigious, but judiciously used, centering heavily on its truly stunning monster creation. An anecdote shared with us by the team notes that the crew at Intelligent Creatures in Toronto researched “wounded circus animals, strays and just about anything that moves on four legs” to find the balance between personality and design for the film’s blockbuster centerpiece. Lastly, its director Michael Matthews might just be a star — if the goal of such an endeavor is to produce “holy shit” images that hype an audience and leave lasting impact, than mission accomplished, because Apocalypse Now Now achieves these in spades. 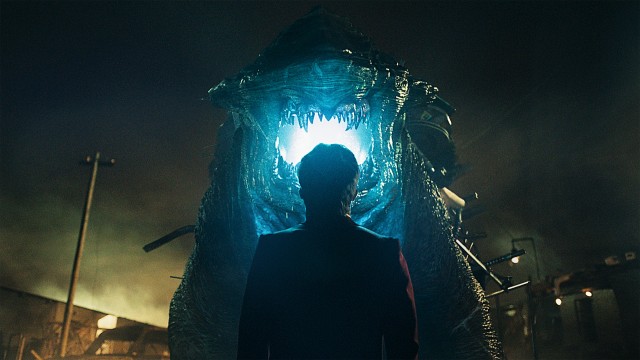 “if the goal of such an endeavor is to produce “holy shit” images that hype an audience and leave lasting impact, than mission accomplished”

Usually proof-of-concept shorts are a bit of a speculative enterprise, but Apocalypse Now Now boasts an impressive team up and down the line. Todd Brown of XYZ Films (The Raid, Bushwick) secured the rights to Charlie Human’s cult novel, and recruited Sean Drummond and Michael Matthews at Be Phat Motel. The up-and-coming company just wrapped up Five Fingers From Marseilles, an intriguing South African western which will make its premiere next week at the Toronto International Film Festival, and Oscar-nominated scribe Terri Tatchell (District 9) is already at work on the Apocalypse Now Now feature script. The momentum for the project is apparent in its collaborators, an impressive assemblage of prominent US, Canadian, & South African production and post-productions outfits.

We have trouble finding a precedent for this level of investiture in the format — even the most prominent sci-fi teaser shorts of recent years tend to be labors of love from scrappy VFX wizards or boutique production companies, banking on the hope that they can parlay the resultant attention into the kind of partnerships the Apocalypse team already has in place. Numerous creators featured on S/W over the years have received development deals post-launch, often from major studios, but those who succeed and become house-hold names (Wes Ball for example) usually get attached to other existing projects and the underlying IP of the short languishes. Of the dozens of shorts optioned for development in the last decade it is notable that we haven’t seen many of those adaptations reach the multiplex. The Apocalypse Now Now package is much firmer and further along than we’ve seen before however, which hopefully suggests that if the short proves successful in attracting financiers, it can avoid the development hell that’s plagued others. Do you want to see a South African supernatural fantasy that’s vulgar and violent? A filthy Stranger Things? Watch this short and if the answer is yes vote your mind by sharing the film.