When a robot pop princess flees her keeper she runs into the arms of a lonely scarecrow. They spend an incredible night together in a heady vortex of music and magic.
READ REVIEW
Next Previous 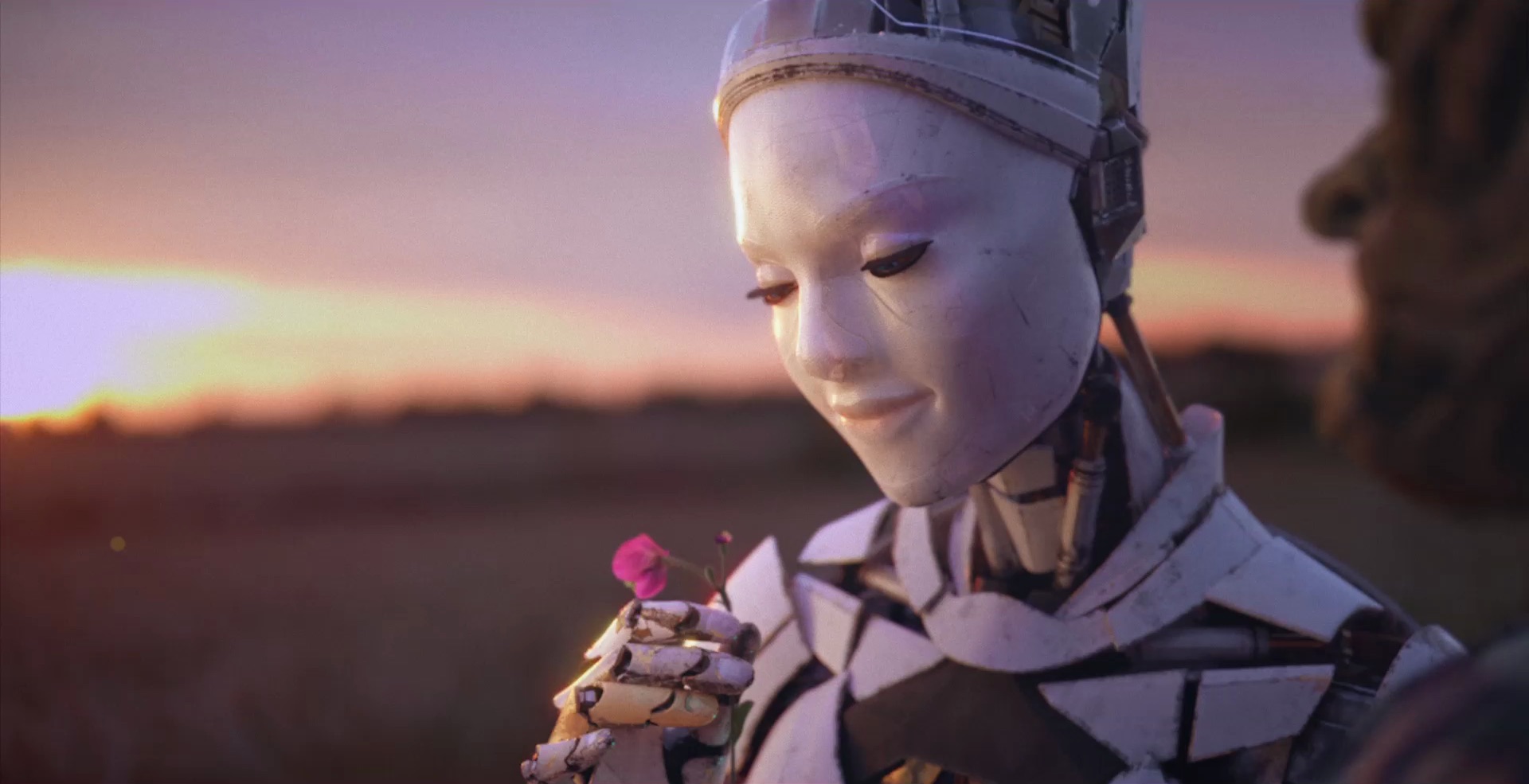 Born out of a scrapped Katy Perry video, Robot & Scarecrow is a fascinating effort from one of the indie-world’s most interesting visual stylists. Utilizing advanced CG techniques to achieve animated photo-realistic emotion like we haven’t seen before at this level of production, twice-featured S/W filmmaker Kibwe Tavares (Robots of Brixton, Jonah) brings an old-fashioned fairy-tale sensibility into the present day with this story of star-crossed lovers finding each other at a massive outdoor festival.

Starring young UK rising stars Jack O’Connell and Holliday Grainger as our leads (and then animated beyond recognition), the film plays on familiar archetypes — Scarecrow, a downtrodden and expendable commoner who nonetheless possesses bravery and thirst for life’s experiences, strikes up a connection with Robot, who, as a pop star, is our closest analogy to old-fashioned royalty. Hers however is a gilded cage, and when she escapes her handlers she and Scarecrow embark on a brief, but unforgettable evening.

The scope and scale of the film production is the immediate standout element of the film, and it’s really something to behold. Tavares has said that he wanted to use CGI in a very organic, natural way and allow the actors to drive the performance of digital characters. Not only is the realization of both Scarecrow and Robot incredibly impressive, tackling that challenge within the context of a crazy and vibrant music fest is a lot of fun. We’re used to visual flair from Tavares, a member of the influential architecturally-minded outfit Factory Fifteen, and director on roster at Nexus Studios, however Robot & Scarecrow exceeds even our enormous expectations. Much respect to South African VFX house Chocolate Tribe as Lead Animation Studio on this one.

The familiarity of the plotline is, as is often the case, a double-edged sword however. The character traits and motivations are easily established, which is important in a short where our main characters do not speak. Yet, the resulting lack of suspense makes the film’s 12min runtime feel longer, as certain scenes drag due to sheer predictability. Much of the film hinges on purely experiential dimensions, as the duo’s courtship is largely edited in montage, and in doing so the film takes on the sensibilities of a music video — fitting, when considering the concept’s genesis. It is a questionable decision to hinge so much of the film’s emotive impact on the animation’s ability to depict silent emotion through facial expression, very few actors unadorned by CGI could pull off such a challenge, but buoyed by the fantastical environs, and a remarkable sense of scale, these scenes are undoubtedly fun.

The visual-centric approach makes sense also in thinking about how the film came to be. The project began due to a large grant from The Space, a UK organization dedicated to supporting digitally focused arts. While it kickstarted the over-2-year process of creating the short, money did run out. Fortunately at that time the film’s producers were able to find a unique source of funding to bring the project to completion. Vero, a new social media network, supplied the money to complete the film and promptly made Robot & Scarecrow a key component of its marketing. For the last 3 weeks you could see the film on the Vero social network by following Kibwe. With exclusive content from S/W Alums Max Joseph and Ben Aston as well, we’re curious about Vero’s unique marketing push, and hope to touch base with them soon.

Like so many of our recent featured filmmakers, the next step for Tavares is feature-land, as he is currently attached to a project titled The Kitchen, written and starring Daniel Kaluuya and developed by Robot & Scarecrow‘s DMC Film in conjunction with Film4.  A drama set in a near future London,  the story follows an unlikely duo who get evicted from their home, and have to do everything they need to survive in a harsh future. Production is due to start in 2018 and the team will be looking for additional finance partners later 2017.