Jonah is a big fish story about the old and the new, and the links and the distances between them. A Sundance 2013 short film from the heralded creator of "Robots of Brixton".
READ REVIEW
Next Previous 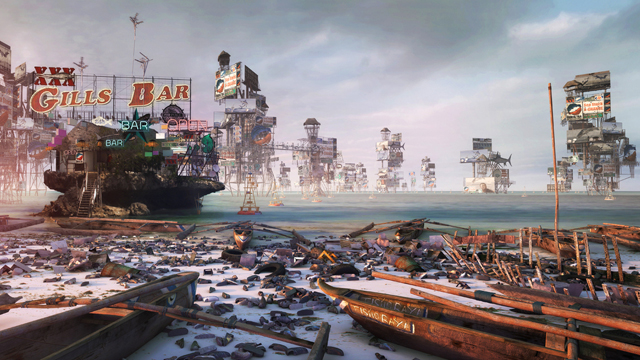 It’s a pleasure to welcome back to Short of the Week Kibwe Tavares, an exciting talent we spotted in 2011 via his indelibly unique Robots of Brixton. Jonah is his followup, and it builds on every aspect of craft and storytelling we liked in his initial work, cementing his reputation not only as a gifted visual stylist, but as a prominent filmmaker of the short form.

Jonah is a 21st century myth, a modern tall tale. In the way Robots of Brixton filtered a sci-fi vision thru historical filters, or (vice versa you may argue) this work seizes upon older forms of story, but updates them into a contemporary, and then futuristic landscape.

From the film’s description: “Mbwana and his best friend Juma are two young men with big dreams. These dreams become reality when they photograph a gigantic fish leaping out of the sea and their small town blossoms into a tourist hot-spot as a result. But for Mbwana, the reality isn’t what he dreamed – and when he meets the fish again, both of them forgotten, ruined and old, he decides only one of them can survive.”

Tavares got noticed initially for Robots’ visual splendor, and Jonah is no slouch in that category, but it is gratifying to see his narrative skills expand.  Robots was his graduation project from architecture school, which, on the surface, seems like an odd fact. However architecture students must be adept at 3D modeling, familiarizing themselves with much of the same software that animators use.  Also architecture is a philosophical art, as larger concerns of social systems and culture inform its practice, and as such, Tavares’ work always seems to function on a larger social level, even when here, the plot is, on its surface, a story of two friends. With Jonah, Tavares fuses his social consciousness with personal storytelling, as the result is dynamite, fleshing out his larger than life epic.

On a day when we debuted our new database of online premiere policies for major fests, it is fitting that we feature Kibwe, who rose to prominence on the web, and who, only after viral success, was accepted into Sundance 2012. He won a special jury mention there, and has been on a steady ascent since, having recently delivered a TED talk, as well as having received major support from preeminent UK organizations like Film4 and the BFI for Jonah. Paired with the success of Factory Fifteen, Tavares’ collective comprised of artists who “produce the imagined, the unreal and the surreal”, Jonah is the rare film that validates promise and in turn, cements Tavares as filmmaker poised to shape the nature of storytelling moving forward.