One way or another, Paul is getting Cody off the roof. The fifth entry of the Takeaway Scenes Project.
READ REVIEW
Next Previous 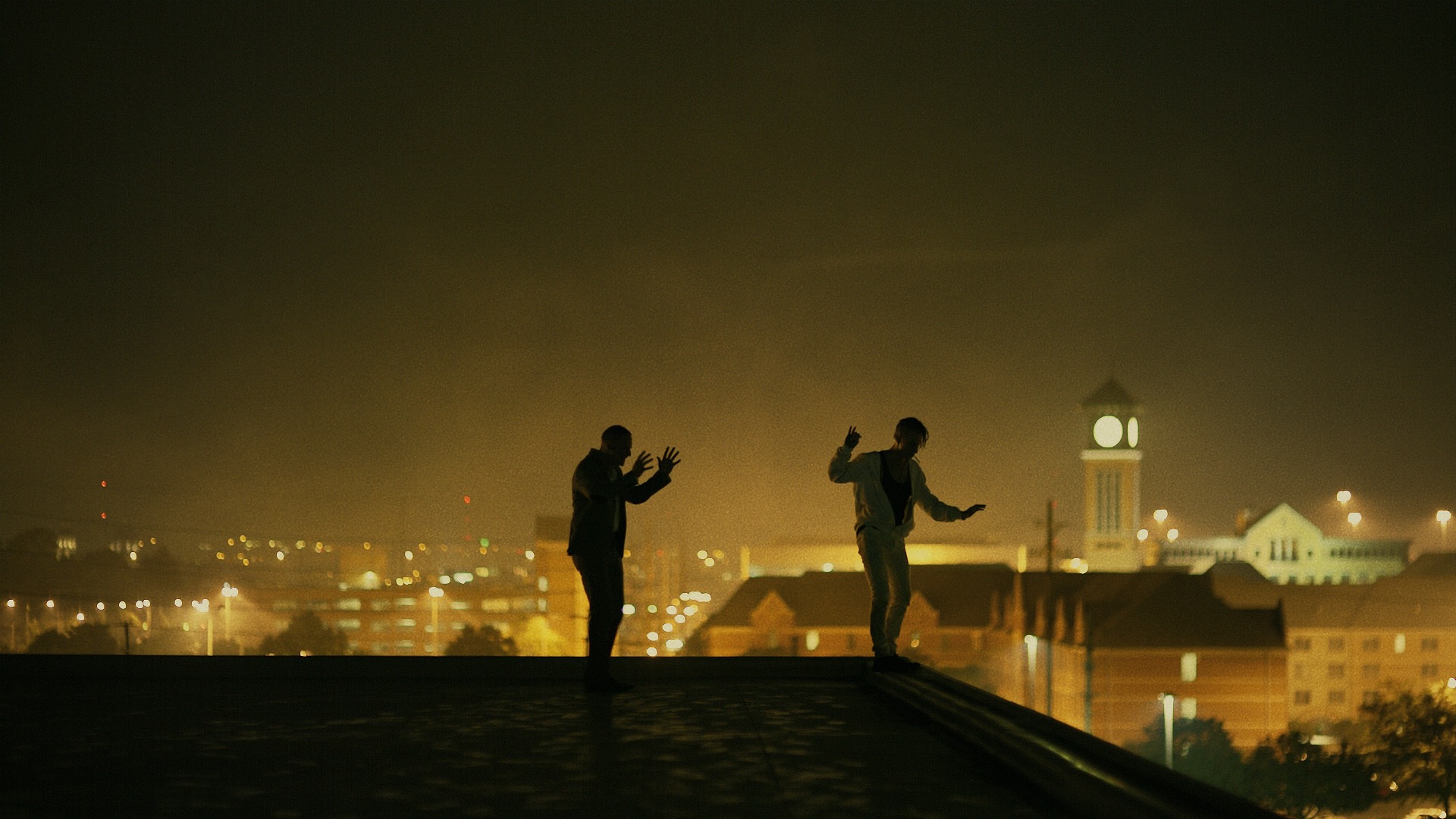 Jumpers is another entry from the Takeaway Scenes Project — a film series that redefines the perfect scene as one raw and honest moment between characters. It follows Paul as he tries to convince Cody to not jump off the roof of a building. If you haven’t seen Takeaway Scenes’ other short film Motherf*cker (based on the play The Motherf*cker With The Hat’) here on Short of the Week, I suggest you give it a watch too.

Jumpers is the fifth installment of the experimental series and perhaps the most challenging according to the filmmakers. By the time the film ends at roughly 10 minutes, you’re left with a sense of awe. Not only is the entire film shot in one take with one of the actors precariously balancing off the side of a tall building, it was filmed perfectly timed with fireworks exploding along the skyline. I, for one, immediately asked myself, “How did they do that?!” It turns out, not without difficulty and major setbacks.

The filmmakers explain their struggle over email, “After two weeks of rehearsal, we suffered a failed attempt to shoot the scene due to police interference and the loss of light. The team was forced to leave the city unsuccessfully, retreating to different corners of the globe, and for the following two months the actors rehearsed from different countries over Skype. A plan was hatched to reshoot during the 4th of July celebration, where the team regrouped and filmed all day in preparation for the microscopic window of execution. The explosions during the climax of the scene are authentic and came from the actual climax of the fireworks display. “

If this doesn’t scream dedication, I don’t know what does.

Jumpers may remind you more of theater than film. This is because the Takeaway Scenes team has found a way to merge the best aspects of stage performance with the visual representation of film. According to the Takeway Scenes website, participants of the project must write or adapt a script from the stage, actors are required to write their own backstories, and the camera must “submit” to the performers. Much like a stage show, each film is carefully blocked and rehearsed. I personally find this fascinating and a wonderful departure from many short films that I’ve seen in recent years. Too many filmmakers put their cameras before their actors and their location choice above their character’s motivations. Jumpers isn’t a film that simply looks cool, it’s a film that gradually and gracefully builds tension – you can’t look away without missing something vital to the story. This is the very essence of theater and why Jumpers is so effective and compelling to watch.

The tongue-twisting dialogue is the first thing you will hear. It’s almost 50 seconds into the film before you see the first actor emerge from a ladder on the roof. As the sarcastic dialogue of both distressed characters— Paul, the angry uncle, and Cody, the suicidal young adult —progresses in dark silhouette along the skyline, I couldn’t see their faces. This didn’t matter. I felt like I knew how they were feeling in those moments because I could hear it in their voices. Not until almost 4 minutes into the film do Paul and Cody’s faces come into view. The payoff is worth the wait. The story shifts to a much more personal and empathetic tone as Paul stops goding Cody with sarcasm and opens up about his own bitter past. I felt like I was watching a real-life conversation, with all of its ups, downs, angry, and sad moments.

Many theater practices encourage actors to get to know who their characters are prior to performing. Audience members at the back of the theater must be able to sense the emotion coming from the actors on stage. This very principle was applied to Jumpers in how the filming was orchestrated to do just that. By the time the camera was up close and personal with Paul and Cody, I was already on the edge of my seat with emotion.

The Takeaway Scene filmmakers are keeping their next project under wraps, but revealed to us at Short of the Week that they are currently in pre-production for 006 and that the script is another original and will be the first scene featuring four actors. Until then, we’ll be anxiously awaiting the next installment to the series!