Two best friends own and operate a convenience store together in a surreal cartoon world.
READ REVIEW
Next Previous 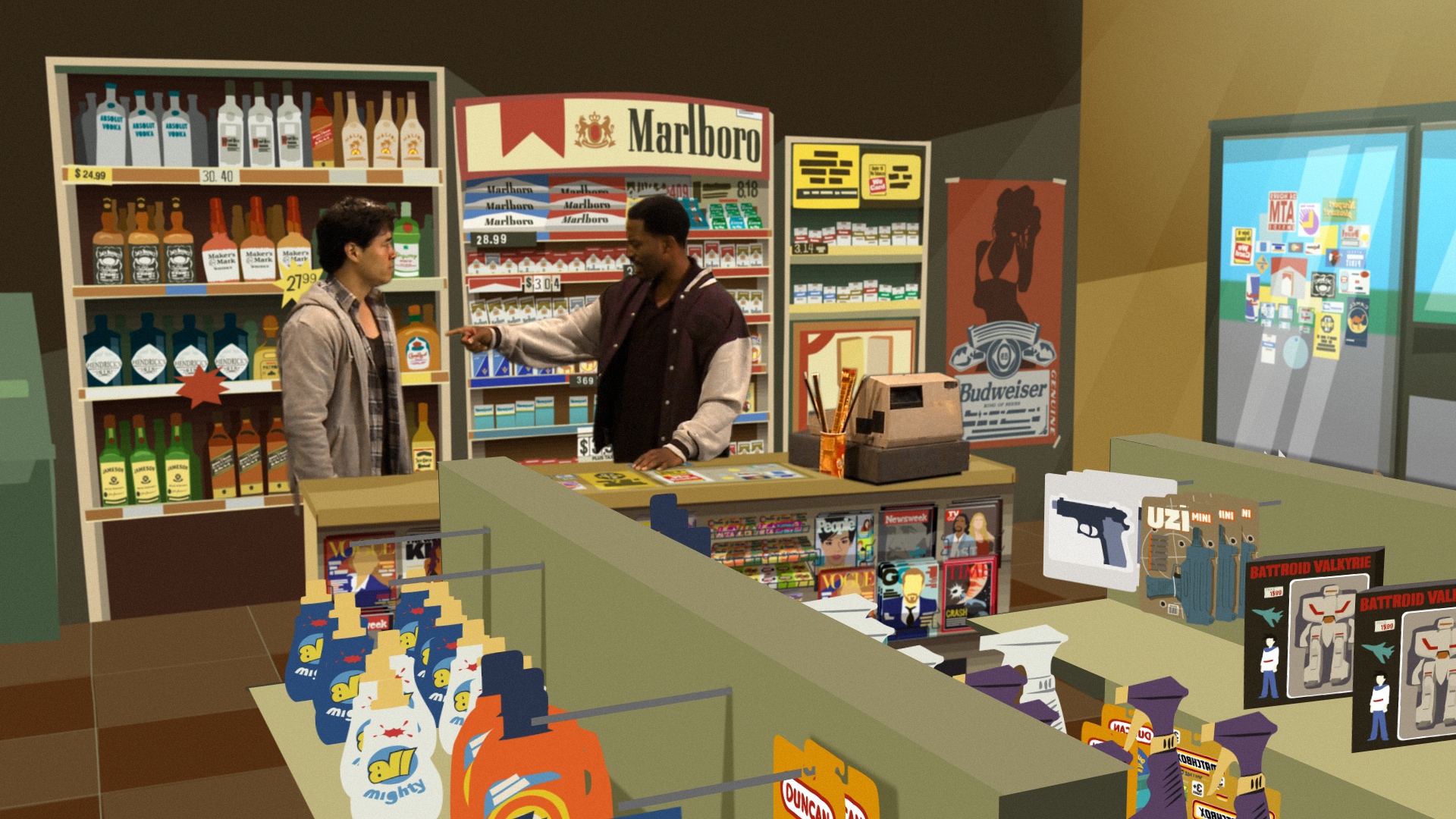 To be completely up front, At Your Convenience doesn’t feel like a short film, but rather a pilot episode for some long lost Comedy Central series. It’s a funny, 22-minute surreal journey through gangs, crack, and crocheting all told in front of a cartoon backdrop (courtesy of designer/animator Christian De Castro). It’s like if South Park and Clerks mated and had biracial children. Hilarious, weird, biracial children.

While At Your Convenience might seem better suited for television than an online “quick watch,” as our esteemed contributor Craig Downing is often fond of saying: “good is good.” And, well, At Your Convenience is pretty darn awesome. It’s absurd and refreshingly original—from both its casting choices to its cell-shaded visual aesthetic. Not to make too big a deal of it, but, in general, it’s great to see a comedically led project that features protagonists other than vaguely, non-threateningly Jewish white guys (and this is coming from a non-threateningly Jewish white guy). Whether it be the rise of Key and Peele or some choice additions to the newest SNL cast, the comedy world has seen a much needed influx of diversity as of late. At Your Convenience seems like a series/short film tailor-made for the modern comedic generation—intent on bucking stereotypes while it simultaneously makes fun of them.

The cast is stellar. Both Randall Park (The Interview, Veep) and Dwayne Perkins (Late Night with Conan O’Brien) have a tremendous knack for delivery and timing. Park plays stupid/innocent without being annoying. Perkins is the straight man of the duo, his performance balancing some of the more “out there” moments (like, say, tiny ponies in crack pouches).

In regards to the tone, co-writer and director Ryamond Lai writes via e-mail: “As we began to write and polish the script, it occurred to me that we might be skirting a fine tonal line that could easily vault into controversy/offense if we weren’t careful.  That’s when I realized that we could buy ourselves a buffer if we delve into the surreal, visually speaking.  This could create a level of detachment for the audience that would allow us to discuss whatever we wanted, and not offend anybody too egregiously.”

By why make a comedy television pilot in the first place? Well, Lai created the project for his MFA thesis at USC. Instead of making a long short film and hoping to parlay that into a feature (as so many short filmmakers aim to do), Lai went with a “pilot” television approach. With this line of thinking, if he managed to sell his passion project to a network, he’d be able to keep his diverse cast and creative control (instead of starting from scratch with studio interference). He’d literally have the first episode packaged and ready to go. Just shake some hands and cash the check.

It’s a practical—albeit unconventional—approach to breaking into the “business” and I admire Lai’s efforts. Unfortunately, he never quite landed that easy sell. As Lai relates, “It screened pretty well and there was tepid interest/meetings, but nothing ever materialized…But I still believe in the project, and I know there’s an audience for it out there.”

I agree. While I don’t necessarily think  At Your Convenience “The Series” would appeal to a wide audience, it’s the type of show that could be championed by a passionate, enlightened few, watching at 1am on their laptops in the comfort of their dorm rooms. Regardless of whether or not we’ll ever get to see the project go any further, at the very least, it has found its way online for all to enjoy.

As for what’s next, Lai has a couple feature scripts he’s trying to get made.  One is a coming of age sci-fi dramedy about a teenage DJ who must save the love of his life from the grips of an intergalactic soul sucking android (great pitch). The other is an idea he’s developing with Dwayne Perkins about a stand-up comedian who is kidnapped and locked in a room and needs to figure out why. Finally, he has a short documentary that’s beginning to make the festival rounds about Ken Miura, a USC cinema legend who taught and inspired filmmakers like George Lucas, Walter Murch, Ben Burtt, and Gary Rydstrom.