Two space engineer's journey through deep space takes a dramatic turn when they discover an emergency message from the past.
READ REVIEW
Next Previous 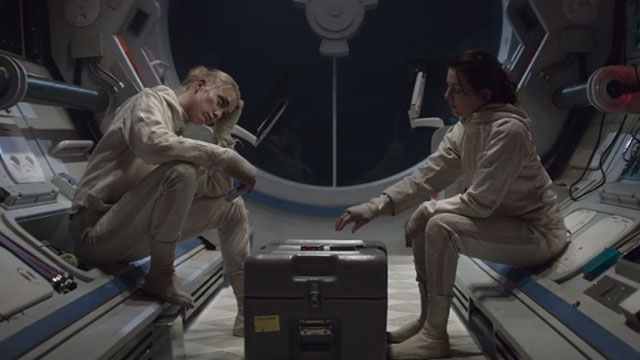 Building on the success from its debut outing, The Imagination Series from Bombay Sapphire returns once again to offer 5 storytellers the chance to create their own short film. Based on an outline script by Oscar-winner Geoffrey Fletcher, this years batch of films saw the writer’s words transformed into a fast paced action film, a suspenseful thriller, a romantic comedy, a dark thriller and a Sci-Fi Drama.

Written by National Film and Television School graduate Chris Cornwell, pick of the bunch Exit Log presents a vision of the future where time travel has been invented and made an emergency safety feature on all space vessels. Inspired by the works of classic Science Fiction writers Phillip K Dick and Isaac Asimov, Cornwell’s narrative sees shipmates Amy and Hannah activate their ‘timedrive’ to roll time back 3-minutes and find an escape from the critical situation they find themselves in.

“What if you could tell a time travel story in one five minute sequence, a story where you started at the end and worked your way back to the beginning?”- The inspiration behind my winning script by writer Chris Cornwell

Sharing as much with Greek mythology, as it does with the Sci-fi narratives it hopes to emulate, director Gary Freedman and his production team opt not to rely heavily on the impeccably designed set and impressive VFX artists they have access to, instead putting the emphasis on engaging performances and tense drama. A two-hander revolving around the dialogue of the film’s desperate space engineers, actors Ruta Gedmintas and Ophelia Lovibond bring a compelling intensity to their roles, ensuring the success of transporting Cornwell’s story from script to screen.

With the triumph of last year’s Room 8 (Director James Griffiths’ film won the British Short Film award at the 2014 BAFTA’s) still reverberating throughout the short film world, outline script writer Fletcher believes The Imagination Series is a unique platform that can nurture and inspire upcoming filmmakers. Whilst the chosen films of the 2014 edition of the series may be a mixed bag, there’s no denying the quality of the production on show and its good to see branded shorts with a sole purpose greater than just promoting the product of the company involved. Whether the content served up this year lives up to the claims from Creative Director Mark Boyd that the series re-invents short film for content hungry channels and delivers content that people want to spend time with, we’ll leave it up to you to decide.