The contents of a mysterious box leads a convict to attempt an extraordinary prison escape.
READ REVIEW
Next Previous 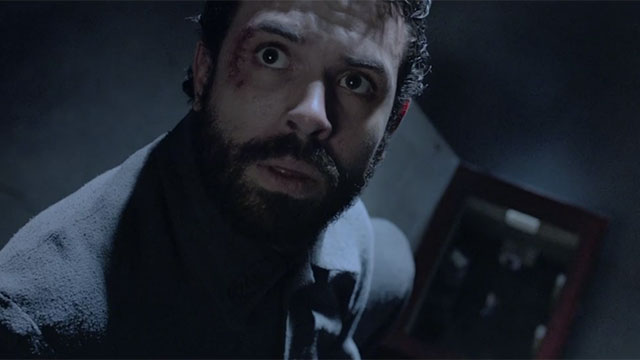 Thriller about Redemption in Live-Action
Directed By James W. Griffiths
Produced By Bombay Sapphire
Made In UK

Set in a 1970’s prison cell, James W. Griffiths’ striking Room 8 mixes an intriguing narrative with impressive visual fx to create an utterly compelling 7-minute short. With a plot that feels pulled from an episode of The Twilight Zone, Griffiths’ short is one part Thriller, one part Science Fiction and one part Horror. Which in my eyes equals a whole lot of awesome.

Set in a Russian jail, when a new British prisoner is thrust into one of the cells he finds a fellow countryman and a mysterious red box. When the box is opened a series of incredible and surreal events give him a chance to escape.

Created as part of the Bombay Sapphire Imagination series, Room 8 is one of five handpicked films based on Oscar-winning screenwriter Geoffrey Fletcher’s (Precious) script. Run in association with the Tribeca Film Festival, the competition invites filmmakers to take a script that is absent of direction and inject their own genre, locations, characters and imagination to bring the film to life. Speaking to the director via email, I was eager to discover exactly what attracted him to this particular competition:

“Online film competitions are becoming more and more common, but the problem with most is that you must use your own resources to make the film first and then it gets judged. What was unique with this competition is that first you pitch for the chance to make it, the judges pick the best pitches and then they give you the resources to make it, including a substantial budget. Opportunities of getting good budgets for short films is few and far between at the moment so I wanted to grab hold of this one with both hands.”

As an editor, Griffiths’ has cut his teeth on a series of successful shorts, including 2011 Short of the Week pick Stanley Pickle. Yet it is in making the transition from editor to director that we’ve really begun to get a sense of the talent and originality Griffiths injects into filmmaking. With Room 8 now his third (and most ambitious) short as a director, following Splitscreen: A Love Story and We Were Wanderers on a Prehistoric Earth, we asked Griffiths how he went about developing Geoffrey Fletcher’s stark script and how the production differed from his previous work:

“The first thing I got from the bare script was that there had to be something really fascinating inside the box. I felt that to open a box and see the room that you where sitting in could provide some really cool visuals and an interesting story. Everything developed from there. Setting it in a prison cell came about when I wanted the man to jump out of the box at the end, but had no real reason for him to do so. So I had the idea of him jumping out to make himself small to escape under the door.”

“This was a much larger production than my previous films. I was used to working with a bare minimum crew with a very low budget, one of my previous films was even shot on mobile phones. This project gave me the opportunity to work with a great production company (Independent), with great actors on a great set.”

Whilst Griffiths’ film is the pick of the bunch, the series as a whole is an impressive collection of shorts, showcasing the work of some up and coming writers/directors. With a variety of different interpretations of Fletcher’s script on show and some truly impressive production values in each film, Bombay Sapphire have certainly set a high standard when it comes to brands collaborating with filmmakers. With the series already accepting submissions for a second year – the winning films due to premiere at the Tribeca film festival in April 2014 – we’re already eagerly anticipating what this impressive collaboration brings to our screens next year.

View the rest of the Imagination Series