After being dumped by his girlfriend, a street musician suffers from psychological problems manifested as a little demon who disrupts his everyday life.
READ REVIEW
Next Previous 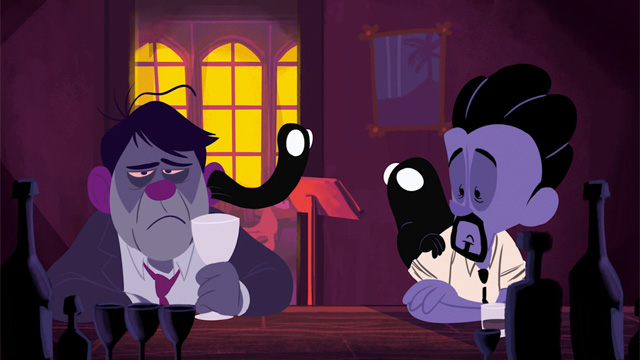 Following the titular Floyd as the jovial musician struts his way around the streets where he performs, our once sprightly protagonist soon finds himself feeling blue as an attempted proposal to his girlfriend doesn’t quite work out the way he intended. Forced to take a job waiting tables after he spent all his money on the engagement ring, Floyd has to sink to new lows before he can finally break free of his debilitating depression and the demon on his shoulder. Concepts surrounding melancholy and inner demons aren’t new to the world of fiction film, but the Anikey studios team handle their narrative with great care, managing to take us on a visually impressive journey through several stages of depression in a brief duration. Whilst some may find the positive message and tidy resolution of Fallin’ Floyd a little hard to swallow, I challenge anyone not to get whisked away in the film’s frantic delivery. At times the short’s pacing leaving you feeling as dizzy as its protagonist as he desperately tries to deal with his feelings of loneliness and despair.

An amalgamation of early stories revolving around a man fighting his demons and a tale of a depressed bear, the narrative of Fallin’ Floyd wasn’t one that instantly fell into place. With Paco admitting via email that the project hit a few delays before it finally began – “The start of the production was a little bit troubled, because when we were about to start animating, we still weren’t satisfied with the story and storyboards. Story-wise the ending of the film wasn’t working. It wasn’t till very late in the process that Floyd became a street musician. Then the entire thing clicked and basically we rewrote the whole thing and I re-did the entire storyboard in 2 weeks time.” Taking about 14 months to complete, the filmmaking duo worked on Fallin’ Floyd whilst also storyboarding their animated feature Trippel Trappel and producing commercial projects.

Combining 2D and 3D animation techniques to create the imposing visual style of their short, it’s in the pair’s attention to detail where this short truly starts to impress. With the impeccable design of characters and backgrounds, the careful consideration of colours and the imaginative use of transitions resulting in their film being one you almost need to watch again and again to truly appreciate all aspects of the production. The visuals elements are in fact so strong, Fallin’ Floyd would be a film that would not only work dialogue-free, but also completely sound-free. Although, that would be a waste of Martin Fondse’s playful score and Jeroen Nadorp imaginative foley work.

Now continuing to work on their animated feature, which they plan to release later in 2014, we wait with fevered anticipation to see if they can translate their successful short film formula to a longer format.