Oswald the bunny did something terrible, and together with his friends they must do all they can to ensure no one ever finds out.
READ REVIEW
Next Previous 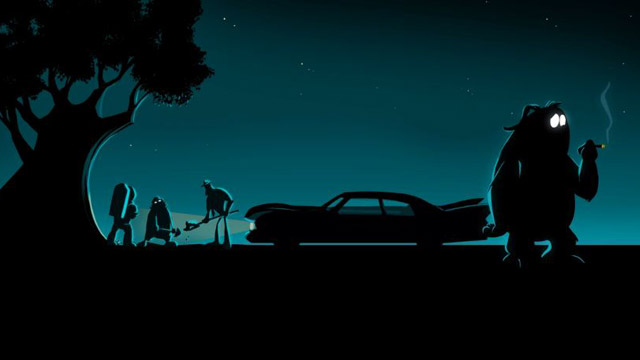 It’s not often you get to reference Ren & Stimpy, Jonathan Lethem, Who Framed Roger Rabbit, Frank Miller, Toy Story and Alice in Wonderland when discussing a short film. Yet, stylistically and narratively Little Quentin takes us on an almost 10-minute journey through a bizarre universe reminiscent of the aforementioned, with consummate ease and assured flair.

Whilst the Netherlands is renowned in the world of art for its rich traditions in producing some of the greatest painters this world has ever seen. In more recent times a majority of the nations creative minds appear to have turned their talented hands to the medium of animation. With their educational establishments producing students capable of going toe to toe with the French heavyweights Gobelins and Supinfocom. Ever since Paul Driessen joined the talented team of animators assembled to work on the seminal 1968 feature the Yellow Submarine, the Dutch appear to have developed an off-kilter and unpredictable approach to animation. Little Quentin from duo Paco Vink & Albert ‘t Hooft (aka Anikey Studios) is the latest film to carry on this tradition with a huge slice of stylish oddness.

Aesthetically, Little Quentin is a weird genre-hopping creature. At times the heavily shadowed noir visuals of the animation make you feel like you’ve stepped between the pages of a surreal bunny-filled edition of Frank Miller’s Sin City­. Whilst other sections, featuring Oswald in his deranged bug-eyed extremity, can’t help but provoke memories of John Kricfalusi’s often controversial Nickelodeon series Ren & Stimpy. As if Little Quentin’s visuals weren’t odd enough, the Anikey Studios team accompany them with a plot that can only be described as what might happen if author Jonathan Lethem tried to combinet the storylines of Who Framed Roger Rabbit, Toy Story and Alice in Wonderland. Initially, the narrative may convince the viewer that this is an unconventional take on the hardboiled detective story, but as the story progresses, our ragtag collection of protagonists soon discover they have a whole new world of (equally disturbing) problems to deal with.

Developed with backing from the Netherlands Film Fund and produced by Il Luster, a small Dutch production house that also lists director Andre Bergs (Pivot) in their collective, Little Quentin has already collected prizes at the Wiz Art and Shoot Me film festivals, as well as building a strong following online (the film has clocked up nearly 100,000 views on Vimeo). With a number of projects in the pipeline and no desire to rest on their laurels, Paco and Albert have no plans to  just sit back and enjoy the growing success of Little Quentin. Development on their feature Trippel Trappel is underway, with production scheduled to take place later in 2012. Whilst a series of interactive storybooks for the iPad (the first of which—Hansel and Gretel—is already available from the App Store), packed with humour aimed at children and adults, are also being created. Finally, plans are in place to release their first short film Paul and The Dragon, a story about a 10yr old boy discovering he has cancer, online imminently—with hopes that viewers will donate money to the institutions helping families with members suffering from cancer. Anikey Studios certainly looks like a production team worth keeping your eyes on.