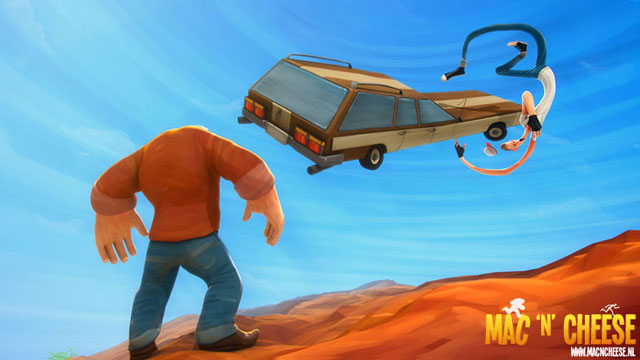 It’s official—in the European student animation wars there is a new player. The Utrecht School of the Arts in the Netherlands is producing students capable of going toe to toe with the French heavyweights Gobelins and Supinfocom, as Blik, a recent feature I adored, and this brief, yet joyously demented short, heartily indicate.

The animation team, Tom Hankins, Gijs van Kooten, Guido Puijk, Roy Nieterau have come up with a high-intensity chase scene between a skinny dude and massive, scary dude. Drugs are imbided to allow superhuman feats, and traffic on the highway suffers as a result. Like many of its french counterparts, there is little story, but the brief runtime and frantic, kintetic action, makes the film enjoyable.

Even though I’m trying to stoke the flames of collegiate rivalry, the Mac ‘n’ Cheese team readily admit their debt to two recent insta-classic chase shorts, Meet Buck and Salesman Pete, products both of current and former Supinfocom students. The film is very much in that style, and if you liked either of those shorts, this one will treat you well.