A love triangle is complicated by penis captivus, an urban legend where an entangled couple cannot physically separate themselves.
READ REVIEW
Next Previous 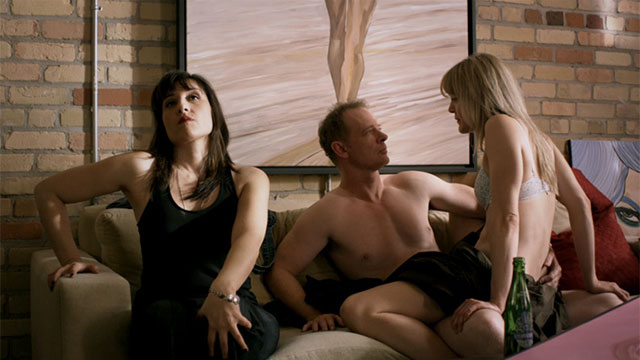 Yeah, yeah, you’ve been caught in some awkward predicaments. And, maybe not being honest has landed you in some hairy situations. Maybe your sweet-talking explained away some incriminating evidence. But what if…what if the incriminating evidence was right there in front of your face? What if your indiscretion was actually stuck to you? You can’t really run now. You can’t both hide under the bed. With your problem actually stuck to you, let’s see how you’d tap dance out of that sloppy moment.

In Captivus, Hannah walks in to discover her girlfriend Kate is bound in a tantalizing tryst with Kate’s ex-husband. Uh oh. Awkward. If only the awkward party ended there. Kate and her ex-husband are stuck and Hannah is the only one who can help them. First we had the genre of Mumblecore. And now with Captivus we have Awkwardcore.

Writer and director Simonee Chichester, delicately creates this very unfortunate situation with medical accuracy and emotional insightfulness, taking the absolutely unbelievable and makes it unnervingly possible.  Not going for the easy laugh, Simonee sustains the awkward tension as she balances the fine line between drama and comedy. What starts as an unbelievable conundrum is resolved through true honesty – from all the characters. The kind of honesty that is almost required in a situation like this. Of course, Simonee is hinting that their collective problems could probably have been avoided if they were all honest in the first place before things got too deep.

Simonee’s co-writer Dane Clark (Dane also co-wrote Margo Lily which we have featured here on SOTW) pitched the initial idea while they were both in residence at the Canadian Film Centre. Simonee was inspired by the cockamamie situation but wanted to challenge themselves to include something both moving and emotional. The fine results you can see here with Captivus.

For now, Simonee is currently finishing a documentary feature as she is also starting to work on her fiction feature MERV. Her screenplay for MERV received the Women in Film and Television Kodak New Vision Mentorship award in 2012.