A couple is determined to plant a tree in the middle of winter following the loss of their child.
READ REVIEW
Next Previous 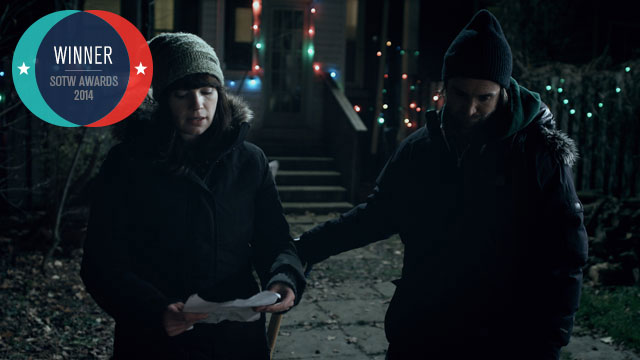 I don’t tend to prognosticate on this site very often, so it’s with a bit of self imposed importance that I make the following claim: filmmaking duo Dane Clark and Linsey Stewart are going to be very famous, very soon. Well, as “famous” as independent Canadian filmmakers can be…but, hey, I digress…

Dane and Linsey knocked our short-loving socks off last year with their film, Long Branch—a delightfully non-cliché romantic comedy that stormed the internet and was the winner of a Short of the Week Award. Margo Lily is their follow-up. Ostensibly, this short appears to be the tonal opposite to Long Branch—a decidedly sad ying to the aforementioned romantic comedy’s audience-pleasing yang. But, if you look at both films side by side, it’s easy to see that they come from the same creative stock. The external comparisons are obvious: the focus on the relationship between just two characters, a cold suburban environment, gorgeous nighttime cinematography, excellent music choices, etc. Yet, beyond the obvious superficial similarities, both films are imbued with tremendous compassion and heart.

Yes, Margo Lily is a film about a sad and devastating topic (the loss of a child), but this is not a sad film. It’s a resoundingly hopeful one, bolstered by touching performances and a strong screenplay. Let’s face it: depressing topics are far too often the topic of short films (as a shorts curator I’ve watched countless films about suicide, abuse, etc.) But, the reason so many of those films fail is that they have nothing to say about the subject other than to loudly stand-up and scream “isn’t THAT dramatic?” at the audience. Well, fortunately, Dane and Linsey seem to get it—they realize that just displaying sad things on screen does not inherently translate into a solid short film. Rather, it’s how those sad things affect us, how they challenge us, and in some cases, how they encourage us to grow and move on. That’s what is interesting. And, in the case of Margo Lily, it’s done in a beautiful, seemingly effortless, seven minutes. You know a filmmaker is talented when they make the difficult appear so very easy.

Dane and Linsey are currently in post-production on their independent feature film, I Put A Hit on You. And, while I’m certainly sad to see them leaving the world of shorts, I’m so eager to see them forge out into a more mainstream medium. Like I said, these two crazy kids are going places.