On a cold winter's night, Lynn's quest for a one night stand is complicated when the guy she goes home with lives two hours away via public transit.
READ REVIEW
Next Previous 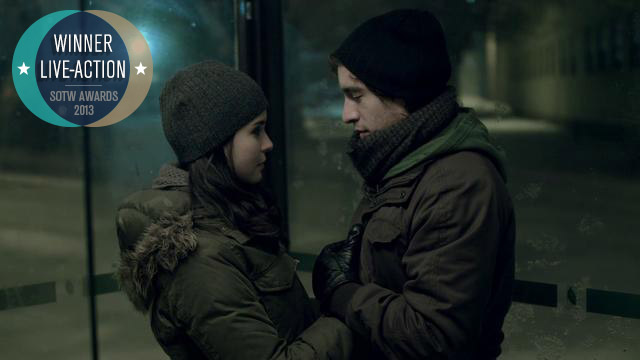 The scenario of Long Branch seems like a great concept for one of those “punch line” shorts: a young woman’s quest for a one night stand is complicated when the guy she goes home with lives two hours away by public transit. But the film movingly transcends its humorous premise to find genuine romance.

We meet Lynn and Gray (their names in the IMDB credits, since they’re never actually named in the film) kissing passionately outside of some club in the middle of winter. Lynn’s determination to go home with the slightly dorky Gray has an angry edge to it, and even when she finds out how far away he lives, she’s committed to her plan. They continue to kiss passionately on the subway train, but eventually lust turns to awkward boredom as the trip wears on. And on.

As we follow the couple first onto the subway and then a bus, the awkwardness is funny. But Gray really wants to get to know Lynn, and her resistance to anything but the most superficial communication reveals some of the pain she’s hiding. Her refusal to answer her constantly-ringing cellphone is another clue to what she’s trying to run away from.

By the time they arrive at Gray’s place on his bicycle(!), we’re aware that this isn’t going to be a one-night stand at all.

Long Branch is carried by its well-written script and the winning performances of Jenny Raven and Alex House. The delicate balance of lust and romance, and the age-old dilemma of young people struggling with less-than-ideal living arrangements give this film universal appeal, but what I loved were the many local touches. As a Torontonian, it’s not often I get the chance to see my city portrayed on film. Oh, lots of films are shot here, but they’re usually set in New York or Chicago. At one point, Lynn is aghast at discovering where Gray lives: “You’re a 905’er?” It was funny to hear this pejorative reference to the area code for the exurbs of Toronto in a film.

It was also wonderful to see our vast and underappreciated transit system on screen. As someone who once dated a woman 15 subway stops and a bus ride away, I could feel the passion-killing distance very keenly. But I also felt the spark that kept these two from simply giving up their almost ludicrous quest to spend the night together. And at 14 minutes, the film is just long enough for us to see into the heart of their budding relationship. Here’s a case where the short film format is a perfect container for this delicate love story.

The filmmakers have created an Indiegogo campaign for their next project, a “romantic thriller” feature film called I Put a Hit on You. If you liked Long Branch, please consider helping them get this one off the ground.