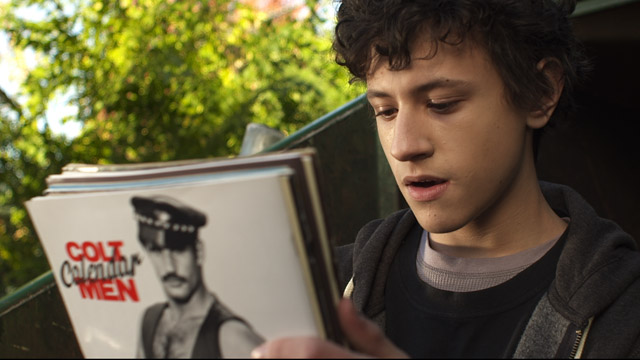 Well, things are even tougher for Jack Hoffman (*snickers*), the protagonist of Adam Baran’s stellar coming-of-age short, Jackpot. It’s 1994 and Jack’s 13 year-old hormones are a raging . He’s also gay. Needless to say, relief isn’t easy to come by (pun not intended, I swear).

There’s no denying that the “coming-of-age” story is a crowded sub-genre (at Short of the Week we’ve recently featured several). Yet, Jackpot’s story is one that is rarely told—a comedic tale of a homosexual teen learning to come to terms with his sexuality and how it defines him as a person. Dealing with adolescence is hard enough. But, constantly being bullied and teased based on your sexual preference? That’s got to be downright unbearable.  So often are nostalgia stories reserved solely for the awkward, dweeby dude lusting after the girl of his dreams (think Can’t Hardly Wait). With this film, Baran isn’t telling a story of a teen pining for someone to love, but rather, it’s about that teen learning to love himself (in both the sweetest and naughtiest interpretations of that phrase).

The story is obviously a personal one. As Baran related to the Huffington Post, “”The film was shot in my hometown, in my bedroom, and in a parking lot where I was bullied myself. The message that the character learns, at the end, is the message I wish I could go back and tell myself at that age — sometimes it’s better to stay and fight even if you don’t win. It’s hard to keep running away from the problem, even if you do need to keep yourself safe. It’s also about how our erotic materials help gay men understand who they are — even if sometimes it leads them to form the wrong impressions about what sex is actually going to be like.”

Visually, the film looks sharp and the performances are excellent. Ethan Navarro is sterling as the lead, never falling into stereotypical portrayals or mannerisms. But, beyond the technical excellence, I do want to hang a lantern on this film’s pacing. Folks, to be blunt, this is how you do it. As a short film curator, I’m constantly sent films over 20 minutes. While sometimes a longer short film is warranted, 9 times out of 10, every “long short,” I’m sent could stand to be cut by several minutes. Not so with Jackpot. At a brisk 9 and a half (including credits!), Baran manages to tell a complete, satisfying story, filled to the brim with heart, humor, and enough outlandish costumes to make the Village People blush. This is a tight, perfectly paced film—something that feels whole on its own right, but also makes sense as a teaser for a larger project. Speaking of which, Baran is attempting to develop a feature version of Jackpot, which he workshopped at the Outfest Screenwriting Lab in 2010. Be sure to throw a few shekels in his vimeo tip jar and help the project get made. Also, follow Adam on Twitter to keep up to date with his numerous creative endeavors.