A little lad contemplates the death of his family.
READ REVIEW
Next Previous 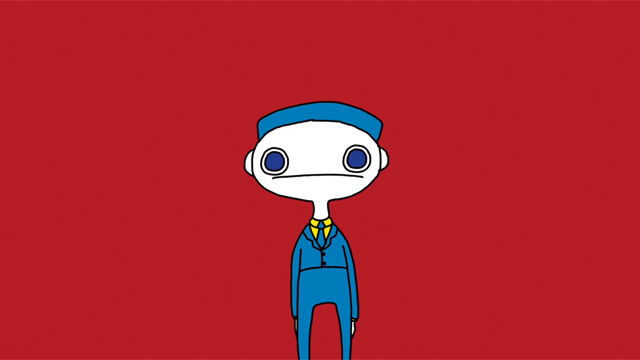 With a narrative revolving around what filmmaker Joe Bichard describes as the “biggest theme for any story after love”, the aptly named DEAD… provides a rather playful look at grief and bereavement. Employing an exuberant animation style and a vibrant colour palette to visualise his dark and poetic tale, Royal College of Art student Bichard provides a fresh and surprisingly enjoyable angle on a much covered subject.

Like recent Short of the Week pick Karaoke, DEAD… avoids the dramatic, sorrowful approach usually seen in cinema when tackling concepts surrounding loss. However, where Renzi’s film opted for a more restrained representation of dealing with death, Bichard’s short employs polar opposite methods, utilising comedy and absurdity to create a surreal look at mortality. Inspired to tackle this somewhat taboo subject by his own thought process after a friend’s father died, Short of the Week spoke to filmmaker Bichard to find out why he chose the themes portrayed in his film and why he employed a comical approach to telling his tale:

“I think it’s all too easy to think of a death in terms of how it affects you and I think people do so more than they might be willing to admit, which is pretty disgusting, but I suppose we humans can be. Humans love attention of any kind, even if it is sympathy or pity. So this idea coupled with death being a pretty all-inclusive theme will hopefully make a reasonably interesting film for everyone to watch. The playful tone is partially stemmed from my own approach to life. Not to take things too seriously and to see the funny side of just about everything, even death! The tone is also a more palatable way to express some of us human’s less desirable egocentric tendencies.”

Adding to the playful narrative of ‘DEAD…’, Bichard utilises a bold and eye-catching colour palette to inject even more fun into his portrayal of his some serious issues. But it’s not just the visuals that add to the comical feel of this animation, Oswald Skillbard’s (who also worked on Alex Grigg’s Late Night Work Club film Phantom Limb) vivid sound design also plays a large role in adding an extra layer of humour to Bichard’s short. As his crunching and squelching foley sounds (apparently Skillbard got through a lot of courgettes recording audio for Bichard) magnify the exaggerated, surreal comedy that makes Bichard’s short such as success. Eager to examine Bichard’s directorial decision, we quizzed the animator on his use of colour and the importance of sound design in his film:

“Making rules for yourself like limiting your colour palette when making stuff, forces you to make more interesting decisions. Who would have thought space was red? Because the story is told by a child it was supposed to add to the childlike (or playful) quality of the film. One of the biggest challenges was to get the dialogue working around all the sound design. We didn’t want the sound design or dialogue competing with each other or else some of the wonderfully acted narration might get lost in Oswald’s amazing custom made foley sounds or vice versa. Sound is so important when it comes to understanding the action depicted in any film, particularly an animated one, so it is an element of film making that should never be overlooked!”

Inspired by the dark humour contained in the films of David Shrigley and Chris Shepherd and the visceral energy of Tim Hope’s work, Bichard states that he wants his work to “feel distinctly English and silly” – something we feel he achieves perfectly with his latest short. With DEAD… now released for all to enjoy, Bichard is already working on his next Royal College of Art short – “My next film is about the next biggest theme in stories after death; love. The narrative follows the trials and tribulations (mainly trials) of an armless man who is kept against his will as a pet by a big green botanical forest monster lady”. Once again, it sounds like another film set to match the criteria he strives to achieve with his filmmaking.