On a night out in New York City, a young man avoids his problems.
READ REVIEW
Next Previous 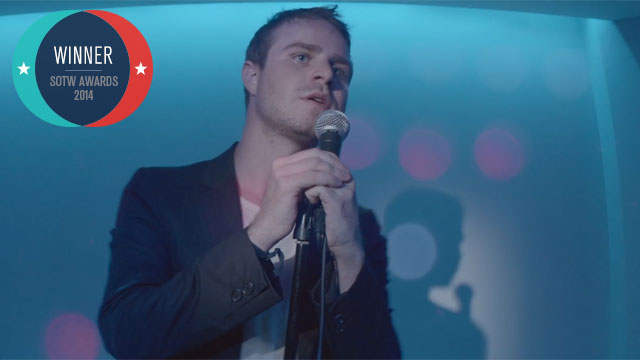 Having been selected as one of the Top 20 New Voices at Sundance 2013, Andrew Renzi gets to showcase exactly why he’s so highly thought of in his latest short film Karoake! Following on from the confident filmmaking showcased in his powerful 2011 short The Fort, the director once again impresses with an emotion-fueled film, loaded with intrigue and restraint.

Orbiting around central character Christopher as he embarks on a night out with his girlfriend and her friends, we soon learn that our protagonist has something he’s trying to avoid after a series of missed calls and deflective conversations imply that all is not right in his world. However, it’s only in retrospect, when the film is over, that you truly begin to understand what you’ve just seen and Christopher’s troubled and distant gaze begins to make sense. Long after the credits roll, as time has granted us the space to digest and personalise what we’ve just witnessed, the power and emotion of Renzi’s film not only becomes apparent, but more gripping.

The impending loss of a loved-one is something we all inevitably have to deal with at some point in our life and while some filmmakers have chosen to portray the process with full-blown drama, Renzi employs a much more subtle and reflective approach. Inspired by the experience of losing his own father to cancer, instead of focusing on the fading family member, the director targets his narrative at those trying to deal with the looming bereavement. Renzi has obviously created a deeply personal film based on his own encounters with loss, but what is most affecting about Karaoke! is how such an intimate story is internalizes in the audience, as you begin to consider your own experiences, think about those to come, and even battle with your own thoughts of mortality.

Miles Davis once famously said “don’t play what’s there, play what’s not there” and while he might have been talking about Jazz, or he might have been talking about life, it’s an adage that seems very apt in the case of Renzi’s latest short. It would have been easy for the director to take a more obvious route with his narrative and instead make his audience stare death directly in the eye. However, he avoids over-used shots of IV drips in arms, medical ventilators pumping away or cardiac monitors rhythmically pulsing and instead leaves that much needed space for his audience to actually reflect on the early ambiguity of his story. Whilst Renzi’s quiet study of a young man dealing with one of life’s most interrogated conundrums might not be what everyone is looking for in a short film, I for one applaud the directors fresh approach on a much broached subject.

Currently working on his first feature film Franny, with produced through Treehouse Pictures (All is Lost), Andrew Renzi is set to be another short film director making the transition to the longer format. If his short film work is an indication of what to expect, we can’t wait to see him get his teeth sunk into something meatier.