The inhabitants of an extremely windy area learn to deal with their difficult living conditions.
READ REVIEW
Next Previous 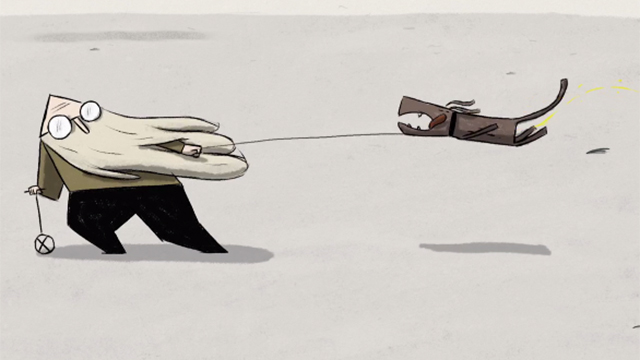 A film revolving around how communities learn to adapt in the landscapes they live, Robert Löbel’s animated short Wind is the charming tale of the daily routines of the settlers in an exceptionally windswept world. Created as his graduation project whilst studying at Hamburg University of Applied Sciences’ Department of Design, Löbel’s film has gone on to play festivals worldwide, from Annecy and LIAF, before finally being released online.

His film may only be just under four minutes in length, but despite its brevity, animator Löbel has managed to create a well-considered and detailed universe for his story to unfold. Inventively creating numerous comic situations in which the dwellers of his breezy land have humorously adapted to their unusual circumstances, it’s in this ingenuity and originality where Wind really excels. Whether it’s the creative methods a barman finds to serve his customers or the legions of solo ping-pong players rallying alone, this is a short designed to make you smile at the animators fantastical concept and its odd citizens.

With a concept as blustery as Wind, sound design was always going to play a major part in the success of Löbel’s film and once again David Kamp is the man to provide the soundtrack to yet another successful animation – Kamp’s career has already seen him take on audio duties for SotW alumni Matthias Hoegg, David OReilly and Dave Prosser. Opting against the use of music, Kamp instead employs some careful selected sound effects to compliment the ever-present sound of battering wind that runs throughout Löbel’s short. It’s an effective tactic, the sound of the gale is so cutting it actually makes you shudder and reach for another layer to wrap around you. A perfect companion to the filmmakers impressive visual style, Kamp’s soundtrack not only adds extra depth to Wind, it’s an essential element in making it such an engaging short.

With over 90,000 views (and counting) in just two days on Vimeo, where it has just been selected as a ‘Staff Pick’, Löbel’s film has already attracted quite a fan base online and its easy to see why. Short, snappy and full of social commentary – Wind is exactly the kind of thing us internet folk love.