In the future, technology may change, but the patterns and routines of daily life stay constant—until we disrupt them.
READ REVIEW
Next Previous 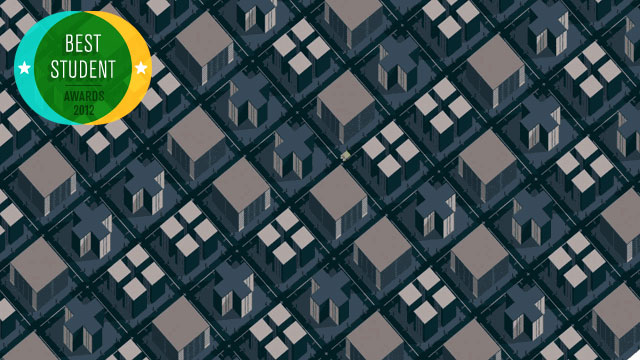 This film is about patterns. It starts as just another Thursday in a not-so-distant future where we meet a regular working man who begins the day with the typical routines of daily life: morning alarm, coffee, work. The point is made clear that, though this future may have new technology, day to day life doesn’t stray far from today. And though we humans can set routines for ourselves, nature can always disrupt it as it does when a bird pulls a cable that cuts power to city workers. One worker, a woman, arranges to meet the man for an evening date. The two enjoy an elevator ride miles up to an orbiting observatory where they observe the city’s beautiful display of traffic patterns.

The story is elegant—simple yet beautiful—and universal. It’s in our nature to make our lives predictable. But Thursday reminds that disruption is a worthwhile risk. A disruption in productivity can lead to an evening of new experiences. And if things may take a turn for the worse, like the bird in the final scene that falls to its death and then bounces back to life, we’re more resilient than we think.

The story is light and charming, but the real beauty in this film is the pairing of story and aesthetic. Matthias Hoegg builds on the elegant compositions and simplified 3D of his previous film, August, and adds to it a mesmerizing layer of patterns inspired by American quilts. We see the pattern of a city grid morph into the pattern on a blanket. Every building, window, tree, branch follows a grid. The sound by Marian Mentrup follows in the theme of patterns by creating a rhythmic structure that is then reflected in the editing (both of which follow the rhythm of the same metronome count according to Matthias).

There’s a great interview with Matthias on Motionographer where he discusses more of his process.