An Inuit fisherman stationed on a remote fjord in Greenland makes radio contact with a distressed caller. A campion piece to the blockbuster film, Gravity.
READ REVIEW
Next Previous 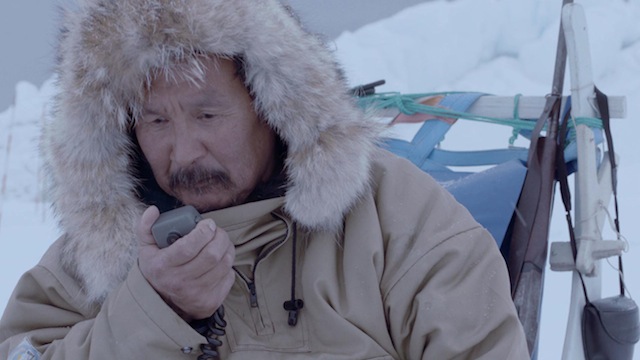 (Minor Spoilers) Aningaaq is the other end of Sandra Bullock’s character’s lost in translation distress call while trapped in the Russian space pod. Yes, this is the other side of the story—a different perspective on the chatty Inuit who howls like a dog and hums lullabies.

Admittedly, this short is somewhat dependent on you having seen its bigger cinematic brother, but amazingly, it’s also a pretty compelling piece of short drama on its own—an examination of isolation and loneliness that makes for an interesting correlation to the vastness of space. Taking place on a remote fjord in Greenland, the glacial wilderness provides for an austere setting, one that rivals the black terror hovering outside our atmosphere. We know all the dialogue beats, but yet the new framing gives them refreshed meaning. No longer are the stakes off earth in that tiny space pod with a dying, panicked woman, but rather on the far corners of Earth. Here is a man dealing with his own personal struggles—a sick dog, the need to provide for his family—and thus we are giving a fascinating lesson in context. As the pessimist would say, no matter the crap you’re going through, someone else somewhere has it worse.

Directed by Alfonso Cuarón’s son, Jonás (who we last saw in another short film tie-in),  the film was financed by Warner Home Video. The original intent was to slap this on Gravity‘s Blu-ray/DVD release as a unique special feature. Yet, the film has slowly developed its own cinematic path screening at both Venice and Telluride. Oscar-eligible, there was a bit of buzz gong that the short could be honored with a gold statuette at the Academy Awards. If it and Gravity both were honored such, it would have been a first—alas, the live-action shortlist was released over the weekend without Aningaaq on it.

The frenzy about Oscar, was fun, but also raises some interesting implications about shorts and how their role keeps changing in the overall cinematic landscape.  Originally delegated as something you might occasionally see at a film festival, shorts matter now. Yes, we’ve said it ad nauseam, but the internet has truly changed the game for bite-sized narratives, allowing them to exist and entertain in a variety of different ways apart from some unknown theatrical setting. Branded film, feature film tie-in, a pitch for a longer work, a standalone story, a stylistic innovator—the role that a short film can play in today’s crowded marketplace is veritably endless. And, best of all, people are watching and making them in greater numbers than ever before. But, enough proselytizing for the short film lobby. Really, above all, I’m just excited that more people are watching shorts in the first place—even if takes the name power of Alfonso Cuarón and Sandra Bullock’s voice on a distance radio to get them there.
YouTube
LIKE TWEET