A political thriller set in the underhanded world of high school government.
READ REVIEW
Next Previous 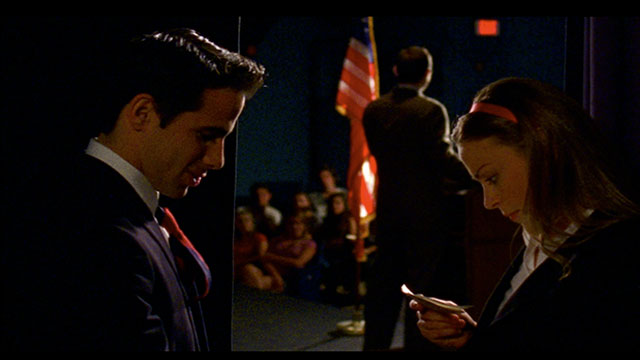 It’s Election Day here in the United States, so when it comes to topical entertainment Zach Wechter’s appropriately titled effort out of Chapman University more than fits the bill. There’s little argument that our political system is corrupt—a seedy, duplicitous morass of closed door agreements and scandal. Thus, it’s befitting to see those descriptors passed down the system all the way to the competitive world of high school elections.

Wechter’s short is clearly committed to its genre routes, and in turn, it wisely avoids playing up its small scale setting for laughs (Alexander Payne’s Election this is not). Rather, Wechter and his team commit fully. This isn’t trivial teenage politics—it’s war. Our rival competitors have an election to win, and thus, these young overachievers have already shed their youthful innocence in favor of adult aspirations. Power, control, greed, and all of it before second period.

Election Day is a decidedly plot driven narrative, a film that mixes and matches various styles, ultimately creating something unique as a byproduct. Wechter cites Rian Johnson’s Brick as an inspiration, but I’d argue the film is more akin to the under-seen Assassination of a High School President from back in 2008—a genre thriller oblivious of its setting. The film sets up interesting characters, each of whom seems to be hiding something from the others. Like any good mystery, the pieces all come into place in time for the film’s final reveal—something that’s especially impressive considering the 11 minute runtime. It’s yet another subtle reminder that a smart script doesn’t need twenty plus minutes to build a satisfying story (aspiring short filmmakers out there take note).

Unlike so many other modern shorts, this one was actually shot on film (Chapman University has a strong relationship with Kodak). The result gives Election Day‘s visuals a distinguished bit of panache. The costume design should also be noted—one of the leads’s innocent red headband is perfectly juxtaposed against her grown up business suit.

Wechter and his crew shot the film three years ago and it has since played at several festivals before finding its way online. His senior thesis film Straight Down Low, which recently began a festival run of its own, takes Wechter’s interest in genre-blending a step further—a neo-noir detective story set in the inner city. Hopefully, it will be made publicly available soon.

Beyond his short work, Wechter has begun directing/producing music videos with a collective called EVERDREAM, which is made up of  fellow Chapman grads RJ Collins, Mishka Kornai, and Joe Sill (Sill’s film Expo was featured on Short of the Week a few months back). For more information on all things Zack Wechter, please visit his website: www.zachwechter.com.
Vimeo Filmmaker Website
LIKE TWEET