War, fate, and a broken walkman transcend space and time in this sci-fi love story.
READ REVIEW
Next Previous 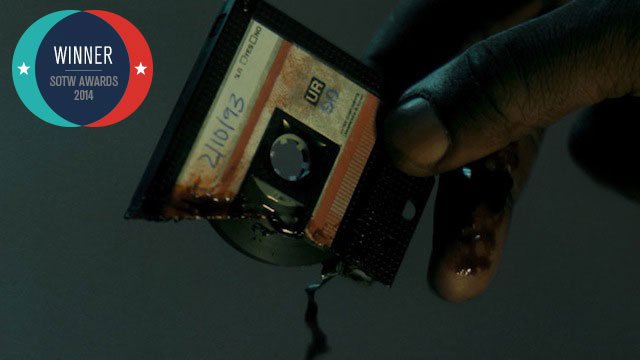 It’s a distinct pleasure to see smart sci-fi in any medium. Not to sound grouchy, but with the growing accessibility to top-notch VFX, it seems easier than ever to answer the question of “what is this script missing?”, with “more aliens, bigger guns”.

That’s not how it should be, and shorts SHOULD lead the way, because, as we try to emphasize, shorts, rather than $200M tentpoles, are the arena in which to explore ideas. All of which is a prologue to saying that today we have a keeper for you, a celebrated short science-fiction film from up-and-comer Jesse Atlas, which, while not scientifically deep, accomplishes the important traits of being both novel and emotionally resonant.

The film opens with a shot of numerous cassette tapes meticulously labeled and ordered. The time period we are in in unclear, but the tapes themselves are from the mid-80’s to the early 90’s. A man listens to one tape and we hear the voice of woman describing her day. He begins to cry. The ambiguous nature of this setup piques our curiosity. The recorder breaks, and the man goes to his workshop to fix it. Identifying the culpable part, he replaces it with a piece he harvests from an old NASA kit. It works. He listens to the voice on the recording and is once again transported—this time, literally so.

It’s a sort of hokey, 80’s premise that doesn’t necessarily blend well with the serious Primer-style depiction of a workshop tinkerer, but Atlas asks you to suspend disbelief and jump with him. Plausibility is not his goal, and he spends next to no time establishing behaviors or rules for this fantastic device. It could rub some viewers the wrong way, but I think it’s a perfect use of a cliché, as it exploits familiarity with the plot trope in order to progress the narrative, allowing Atlas to focus more on the story he wants to tell than the mechanics of it.  It could be argued that tonally it is a clever move as well, that the use of a hokey setup establishes an audience expectation of the film that is eventually subverted, leaving the viewer more emotionally vulnerable to the eventual climax.

Now it’s dangerous to say on the internet that anything relating to time travel can be novel, and certainly, the idea of time loops are not in any way unexplored territory, but I do find the conceit of the tape player to be a very clever for many reasons.  The fact that tape is, in itself, a time-based medium is one. It is linear, but simultaneously all moments of time represented on the tape exist at any given moment through its physicality. It encompasses the concept of time as a stream, but also the idea of time as a fixed entity, and thus serves as a clever metaphor.  Secondly, the concept of rewind, an identifiable way to scrub through time, a sort of fantastical interface or controller is pleasing. Lastly, while not an original insight, the fact that recording technology is already is a sense a form of time travel makes it the perfect medium in which to explore the concept. All of those tapes replicate moments that passed years earlier. In a sense, every time you listen to a tape you are traveling through time to revisit an event long since passed, that of the original recording.

With a gorgeous grade and great latitude in the shots from extreme closeups to wide angle, the film has plenty of style, and is a strong directorial showcase for Atlas—a testament to skills earned as a commercial director rather than those of a precocious talent. The film was made through the L.A. based production company Collaboration Factory, which is also a home to Brent Bonacorso, whose work we highlighted this year with the  phenomenal West of the Moon. Bonacorso and Atlas have sought to collaborate in the past on feature films, which is an exciting prospect. We hope that team-up happens, but in the meantime Atlas may have secured his break, as Focus Features announced last week that it wants a feature version of RECORD/PLAY with Atlas attached to direct. Aaron Wolfe, who co-wrote the short as well as edited the film, is onboard too, and Atlas Entertainment is set to produce. With Cutter Hodierne’s VICE-produced adaptation of Fishing Without Nets on the horizon, and Destin Daniel Cretton’s Short Term 12 garnering acclaim in limited release, the short-to-feature path seems alive and well, and executives are showing excellent taste.