West of the Moon

Loosely based on several hundred interviews with children about their dreams, 'West of the Moon' is the story of one man's lost love and his strange path to redemption, aided along the way by a gambling robot, a wayward monkey, and a healthy dose of determination.
READ REVIEW
Next Previous

West of the Moon 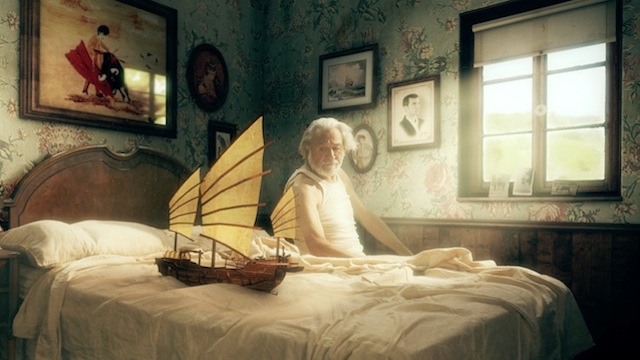 A writer/director/VFX artist, Brent Bonacorso has received many accolades for West of the Moon, his brilliant fantasy short that adeptly utilizes VFX wizardry for purposes more lovely and nuanced than simple aliens and explosions (though there is a quite prominent robot). Now a year or two off of the festival scene, the complete short comes to Vimeo.

Told in a gravelly voice over, we are lead to believe that an old man is recounting to us the momentous events of his life. From the very get go however this world differs from ours in its phantasmagoric effects. The result is similar to an older feature I love, Big Fish, in which romantic hyperbole colors a traditional story of love and loss.

This is a total designer short film, brimming with visual ideas, each a delight. The connection between scenes is loose, flowing in a surreal stream-of-consciousness manner. It summons comparisons to two favorites; like Voice Over, the film uses the whimsical possibilities of a short story to basically create a bunch of striking imagery, though rather than extended metaphors, Bonacorso uses Latin flavor to conjure a tone more akin to Magical Realism. It also reminds me of the short work of Ray Tintori, in which narrative cause and effect is either accelerated or completely done away with in the name of creating as many scenes and emotions as possible, condensing a feature’s worth of drama into a smaller package.

Brent’s experience post-short is actually very similar to what we’ve been seeing with many of the VFX-driven, direct-to internet sci-fi pieces we’ve been featuring, though, perhaps due to the quirky storytelling, he found it better to go the festival route. With feature representation by David Karp at WME (a rep for the feature Chronicle which is something of touchstone for low budget VFX in Hollywood), Brent was briefly tabbed for the in development Monsters sequel.

That ultimately fell through, but this film is a unimpeachable testament to Bonacorso’s talent, so we’re excited to track his career going forward.