From the Future with Love

From the Future with Love 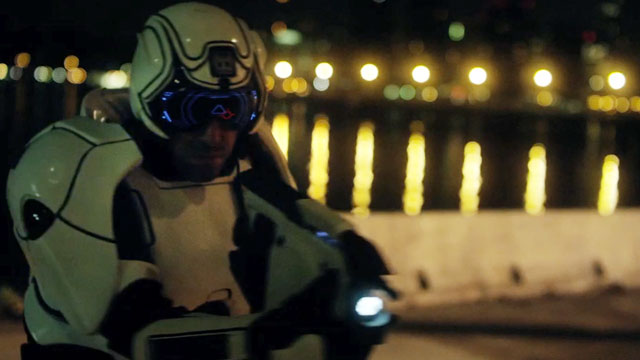 Coming off like a showreel for an old school Paul Verhoeven sci-fi epic, K-Michel Parandi’s From the Future with Love is a satirical jump into future dystopia—a world where society’s policemen only provide protection if you’ve paid for it. It’s a fantastic premise, and fortunately, the short strings together a series of vignettes that really explore it in compelling ways. Ultimately, the movie’s allegorical sci-fi roots aren’t subtle, but really they’re not meant to be. This is a showpiece for great, gritty science fiction ideas, bolstered by top-notch production design and impressive visual effects.

Sci-fi proof of concept shorts are relatively ubiquitous now on the internet (we’ve covered a fair share on Short of the Week). And, like the ones that walked before it, From the Future with Love definitely feels like a teaser for a larger project rather than a fully contained film. However, you have to admire Parandi’s incredible sense of world building. Each little snippet adds more layers to a smartly conceived future society, from high-tech user interfaces to “brain jacking” technology. It’s all familiar without being too cliché, the visuals combining an 80’s science fiction aesthetic with more modern visual tropes. If Robocop and Dick Tracy had a baby, this film would be their illegitimate lovechild—a gangster thriller set in the future. Really, it’s film noir dazzled up with high-tech screens and gizmos . More importantly, this is a teaser that actually teases—I want to see more, and I honestly feel that there is enough content here to support an increased scope (shorts of a similar ilk don’t normally feel this substantial).

A self described mythology engineer, director K-Michel Parandi aims to bring his vision to a larger medium, as this film, shot in New York City last year, is clearly just the beginning. As its fragmented nature suggests, From the Future with Love wasn’t first conceived as a short film, but rather as a very low-budget web series. As the director relates, “Cutting this into a short was not my original intention. That idea came from a meeting I had with someone from the Ridley Scott Agency. I had mentioned that I wanted to create a short from the pieces I just shot but that I couldn’t find the time. I was then strongly encouraged to do it. Now I truly owe this person. There are several more scenes that I wanted to shoot (including a scene where we follow an officer through a futuristic precinct) but time and budget constraints forced me to channel my ideas more selectively. It all happened very fast.” Fast is definitely the operative word. Currently, Parandi has received an offer from a major studio to write and direct a full-length motion picture. But, that’s not all. He’s also been approached by a major TV network and a video game publisher to bring his original story to different mediums. With so many creative options lining up at Parandi’s door, the path forward is somewhat unclear. As Parandi relates, “We can’t sign with everyone, so we need to make a decision. Ultimately it comes down to selecting the partner that will allow the most creative control. My instinct is to push towards the motion picture, with a video game developed as a sidequel, and hopefully the TV series would come later or on the top, assuming I manage to showcase the full potential of this world.” Us consumers just need to patient—we’ll be seeing Parandi’s world expanded (in some form or another) very soon. After all, the future is often closer than we might think.
Vimeo Filmmaker Website
LIKE TWEET