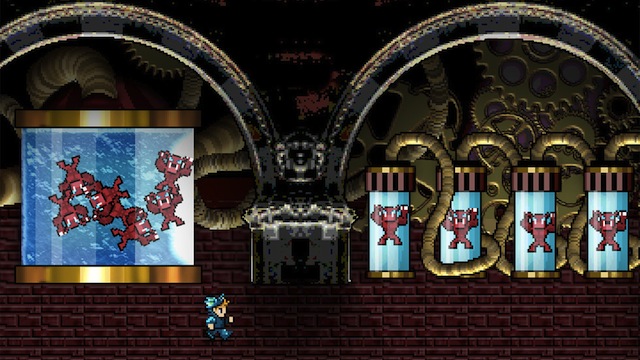 Emily Carmichael is one of the most original voices in short filmmaking today. A graduate of NYU’s MFA Program, she first got our attention with her excellent Sundance short The Hunter and the Swan Discuss Their Meeting, which we interviewed her about back in 2011.

In the meantime she’s been very busy with a successful Kickstarter campaign for a new webseries, a selection as one of Filmmaker Magazine’s 25 New Faces of Independent Film and this wonderful new short film, which just premiered at Tribeca.

RPG OKC, short for Role Playing Game OK Cupid, is set in the world of 8-bit fantasy video games. It charts the ups and downs of an online relationship between a dragoon and a cat-woman. It was commissioned by Madatoms, also responsible for Bad Cars, another SotW feature.

The style of the film is totally captivating. Carmichael draws all of the 8 bit backgrounds and characters in photoshop, then animates them in flash (a video of the process can be seen here). The result is, in Carmichel’s words, a world that is both “strange yet strangely familiar.”

Whether live action or animation, a Brooklyn apartment or an 8-bit castle, what we are seeing here is the emergence of a unique voice in american cinema; a new, great, fantasy comedienne.

Right now she is hard at work on a new short called Stryka about “an awesome reptile woman from another planet who does heists and odd jobs with her (literal) partner in crime, Callen. But she has a secret–she’s been stealing with somebody else.” It’s both a stand alone short and a proof of concept for a larger feature called Arrow, which Carmichel took to the 2012 IFP Emerging Narrative Labs.

The last thing that Carmichel wrote in answer to our interview was that she was feeling very lucky and engaged, “and also tired!” At the rate she’s producing amazing content, I can only imagine.