Project Kronos is a documentary film set in the not too distant future, following a mission to achieve interstellar space travel. As the mission unfolds with extraordinary results, the scientists find themselves dealing with a much bigger agenda.
READ REVIEW
Next Previous 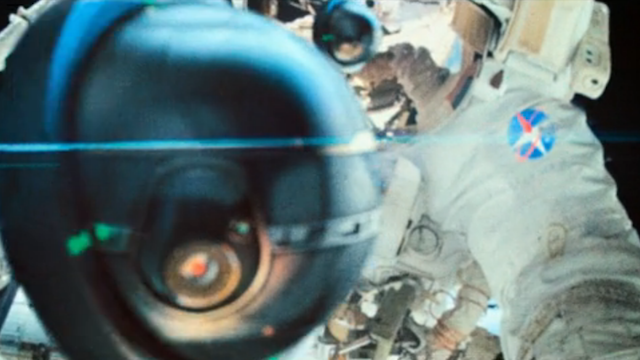 Unmanned space missions are the norm when discussing the future of interstellar space travel. Manned space missions present issues of basic human biology over years of earth time. NASA has forums and message boards dedicated to discussing humanity in space. Filmmaker Hasraf ‘HaZ’ Dulull introduces an alternate possibility that will have you thinking in his short Project Kronos.

Conceived in a faux-documentary style, not unlike a touchstone of short sci-fi, Alive in Joburg, the film begins with a series of title cards that consolidate the American progress of space travel. Here, Project Kronos is defined. Twenty two years from now, humanity has achieved a version of manned space travel that is resistant to the biological constraints of the human body. The film focuses on a series of scientists discussing their thought process in creating and launching Project Kronos.

This film has benefits and misdirection on both story and design. The usual three act structure is scarcely evident in the film. Substance in storytelling does not kick in until the characters discuss how Project Kronos is executed. That pivot succeeds however, raising several moral, ethical, and technological questions that force the viewer to confront their views on the current space programs. This dilemma raises the possibility of a larger science fiction universe that could create a foundation for epic storytelling, and it is rumored that Dulull is considering expanding the short into a series. That could be an ace decision, as the film does make more sense as a prologue for a longer, sustained story.

A working VFX artist with several impressive credits to his name, Dulull’s design is suitably epic. Adobe is a presenting sponsor of the short, a unique and interesting tidbit, and the film is certainly interesting visually. Choices such as overwhelming infographics and a 2:35 aspect ratio were used to modernize fantastic concepts and create epic scope. Extensive use of creative common imagery from NASA is beautifully incorporated. However the success of this approach is undercut when the graphics are merely used as set decoration rather than enhancing the concepts discussed. While a flawed short, overall the craft and ideas presented are a great enticement and introduction into a world that has the potential to be thought-provoking and expansive—we keep our fingers crossed that this is only the first installment of Project Kronos.