In the autumn of 1998, a profound tragedy echoed through a small Michigan town and twisted the well laid plans of a young prodigy in strange and inspired ways.
READ REVIEW
Next Previous 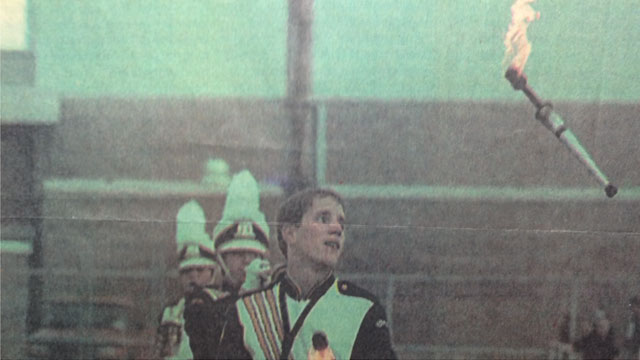 I just want to come right out and say it: I’m jealous of Caleb Slain. Yup. I am flat out jealous of him. I mean, seriously, how does a 22-year-old have so much damn talent? I first noticed Mr. Slain’s work with 2010’s the Lost and Found Shop—a delightfully sweet film that I admittedly borrowed quite a bit from for my own short, Baggage. More recently, I was dazzled by his use of language and direction with Free Pie. Now, I’m in awe of his work as a documentarian with Juggle & Cut, which is both a moving portrayal of human resilience and a love letter to the creative spirit. At this point, if you told me Caleb Slain also happened to be Batman, I wouldn’t blink an eye.

Juggle & Cut tells the story of Andy Phelps, a gifted young kid with a colorful resume: he’s a juggler, unicycler, carpenter, hockey player, and firebreather. But, on a tragic autumn day in 1998, Andy broke his neck in a massive car accident, leaving him without the use of his hands and legs. This film is about Andy’s journey after his accident, and he how he kept his creative fire alive despite some steep emotional and physical obstacles.

In general, it’s quite easy for the “inspirational doc” to be overwrought. But, Juggle & Cut is just too well crafted to venture into hackneyed territory. Slain is stylish with his presentation, but never so showy that he calls attention to himself as a filmmaker. The whole production feels polished without being too controlled—beautiful cinematography compliments old archival footage and photographs.  Much like the visuals, the music is also strong, emotional without being too saccharine.  If you’re interested, the soundtrack can be purchased for the low price of $2.00 (quite a steal if I do say so myself).

Juggle & Cut works because it’s more than just a story about human resilience. Granted, there’s definitely enough in that sentiment to make a compelling documentary. Yet, as the story develops, as Andy’s current occupation is revealed, it essentially becomes a manifesto for creativity. To put it succinctly, we creatives need to make stuff regardless of our supposed limitations. For Andy Phelps, once he lost the ability to physically construct things, he found a different way to express himself. And, so Juggle & Cut is a beautiful take on that impulsive desire to get out there and add to this world—not to consume, but to create—to  build things both tangible and intangible. There’s magic in that notion, and Andy Phelps’s determination is an embodiment of it.

Phelps’s story certainly isn’t over. He has a book coming out soon fittingly entitled, It Never Ends. As for director Caleb Slain, well, I’ll just have to enviously wait for his next project. When it comes to viewing his work, jealousy never felt so good.