A traumatic comedy about life, death, pie and death.
READ REVIEW
Next Previous 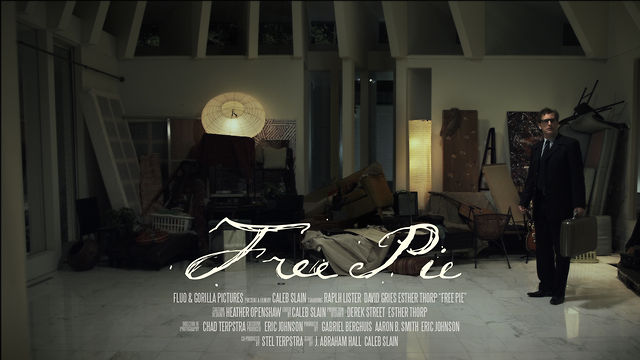 Short films, as we often stress, are the realm of ideas—visual, narrative, we like to see ingenuity and experimentation. Sometimes when the strength of one element is so great it can carry the rest, but when a film manages to combine both, you know it is special.

Free Pie is a spare film, entirely conversation-based and set in a single (magnificent) location. But the design sense of the art production and titles is delicious, which can overshadow what a wonderfully well-crafted production it is narratively.

A mysterious man arrives at an incredibly stylish home. The pile of opulent but haphazardly arranged stuff near the entryway indicates that the owner is somebody who, for lack of a better phrase, doesn’t give a shit. Sure enough when we meet the owner he’s playing guitar in the middle of the room, plugged into a Marshall stack, covered in tattoos. He’s a rock star, and that information is conveyed instantly, visually.

Anyways, this stranger has some bad news, but maybe not the correct bad news? Does he have the wrong person? What is clear is that he’s uniquely bad at his job, which seems to be conveying bad news. What follows is a terrifically witty but dark conversation with several humorous twists and turns. I don’t need to sketch out much more; if you give the film a chance, you’ll find yourself absorbed in its rhythms and revelations.

Director Caleb Slain has received coverage on the site before, with Ed’s Story: It Ain’t Over, which we looked at as part of the Palm Springs 2012 online program. A moving doc, it showed a lot of range for a filmmaker who is still only 23. He broke through into the short film world’s consciousness in 2011 with The Lost & Found Shop, an incredibly accomplished short film, though a bit precious, and has co-directed an award winning commercial for Microsoft, among other accomplishments. Not to distract from the content itself, but Caleb Slain is definitely an up and comer to buy stock in.