A Little Bit Behind

Part-time chef Steve Palmer finds himself 3 seconds out of sync with the universe after he attempts to travel through time.
READ REVIEW
Next Previous

A Little Bit Behind 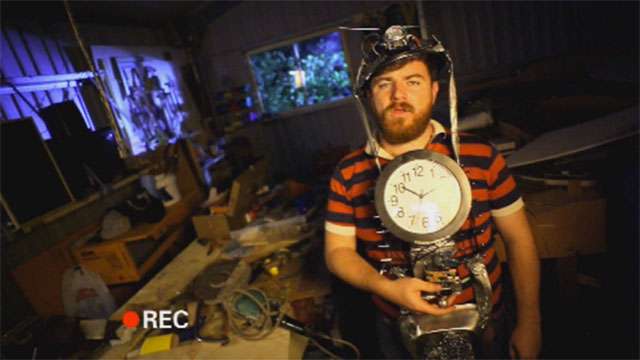 Whilst fans of time-travel movies might be used to the likes of Michael J. Fox and Arnold Schwarzenegger jumping decades trying to alter the future, they’re probably yet to come across the exploits of Stevey ‘3-second’ Palmer. Fuelled by instructive videos found on YouTube and a passion for holidays, DIY enthusiast Palmer creates a machine to explore a new destination for his travels – time.

Coming across like a live-action, comedic version of Jeremy Clapin’s classic animated short Skhizein, A little bit behind is the tale of a man ever so slightly out of sync with his universe. Leaning heavily on the humorous situations found in being marginally out of harmony with your surroundings, Slater’s short employs frisbees, swings, party poppers and inappropriate touching in its quest for laughs – a quest in which it generally succeeds. Refreshingly well-acted for a film put together in such a brief time period, Palmers short nails it in both the tone and pace departments, with its sub 8-minute duration feeling the perfect length for the tale of this unlucky time-traveller.

Created as part of the 48 Hour Film Project back in 2011, director Paul Slater and his team conceived, shot and edited this surprisingly polished production over just 2 days. Given the topic of ‘time travel’ at 7pm on Friday night, the crew spent a gruelling 18 hours shooting across 6 different locations in Sydney, before editing through the night to get the film finished. Despite admittedly making it up as they went along, Slater’s film not only picked up the Best Script award, but also the Best Film and Best Actor accolaides in the Sydney competition.