The Elaborate End of Robert Ebb

A practical joke spectacularly backfires when a night watchman at a movie studio gets stuck inside an unwieldy monster costume.
READ REVIEW
Next Previous

The Elaborate End of Robert Ebb 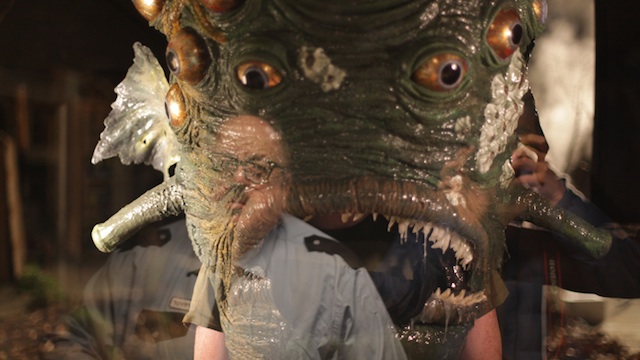 Described as a reverse B-movie  by its creators Clement Bolla, Fx Goby and Matthieu Landour, The Elaborate End of Robert Ebb takes the monster cinema of the Fifties as its inspiration and playfully turns it on its head. A darkly funny tale of a movie studio security guard whose late night prank rapidly spirals out of control, the film intentionally aims for laughs over frights.

Opening with an impressive tracking shot through a smokey studio set, The Elaborate End of Robert Ebb quickly indicates that it doesn’t intend on following the lo-fi ethic of the films it cleverly imitates. Utilizing a drive-in cinema and retro diner for locations and featuring a collection of classic cars and some carefully considered costumes as part of its highly impressive production design, this is a short that has left no stone unturned in ensuring it excels in every department.

However, whilst the film’s success is due to its many impressive parts, there’s no denying the star of the show here – the extravagant monster costume. Created by English 3D design and model making studio Cod Steaks, the outlandish 30kg outfit proved to be probably the most difficult aspect of production, with lead actor Paul Hassall struggling to even walk at times under the immense weight of the guise of his onscreen alter ego.

Since their illustrious debut on Short of the Week back in 2008, when we featured the trio’s impressive Supinfocom graduation film En Tus Brazos, the talented team of directors have been making a name for themselves in the world of commercials – this Coke Super Bowl ad-spot being a particular career highlight. With their first foray into the world of the live-action short already winning the Canal+ award at the Clermont-Ferrand International Short Film Festival in 2012, it looks like this trio of creative filmmakers are bound to be successful with whatever they put their hands towards.