Tale of a glorious, renowned dance couple, seeking to recapture the lost magic now that the man is in a wheelchair.
READ REVIEW
Next Previous 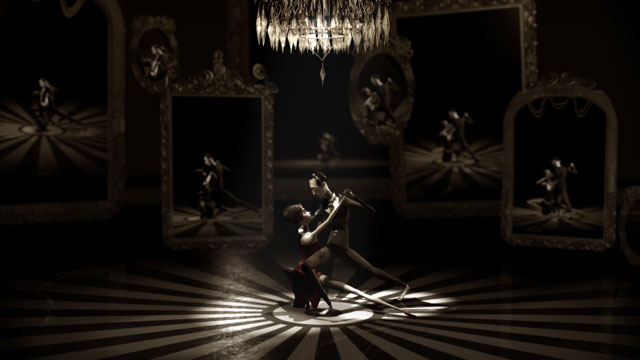 Drama about Love in 3D Animation
Directed By Goby, Landour & Jouret
Produced By Supinfocom
Made In France

The one thing that surveying films in all their vast variety on the internet teaches you is that great work can spring up from anywhere. A kid working away on a laptop in his bedroom is just as likely to blow you away with creativity and talent as something that’s come out of a high profile production house. That being said, there are films that pretty much come with an implied seal of approval that guarantees your time won’t be wasted, and, when it comes to animation, France’s Supinfocom is at the top of its game. That’s not even a judgement call on my behalf. Last year 3D World magazine, after applying criteria such as festival prizes won and student film distribution gained, ranked the school No. 1 worldwide.

This is all, I suppose, a roundabout way of saying that when I stumbled across En Tus Brazos- the tale of a once great, now crippled Tango dancer, his wife, and their break from the world into the glories of imagination and the past- even though I didn’t at the time know it came out of Supinfocom, I wasn’t surprised to later find out that co-directors François-Xavier Goby, Matthieu Landour and Edouard Jouret’s created En Tus Brazos as their graduation piece.

There are so many elements of En Tus Brazos that alone would make it worthy of a mention. From the use of light and reflections, to the framing of the action and subtle camera moves, whether it’s the gentle pushes and pulls in the couple’s apartment or the achingly beautiful final shot that reveals so much about the couple’s relationship and how the accident has transformed their roles, but perhaps in doing so strengthened their dedication to one another.

En Tus Brazos has the perfect balance of sparsity and detail in that it delivers what all films should, but few manage: to build as rich a world as possible by providing the most amount of story, setting and mood with the bare minimum of exposition.

Animation, much more so than the other disciplines of filmmaking, allows creators to actually place the viewer square in the middle of their imaginations and deliver a story as it was originally conceived with minimum compromises. That being the case, I’d happily sign a five-year lease to take up residence with Goby, Landour and Jouret’s creations, if only for the opportunity to join the tango too.