On the brink of wedlock, Shane gets a 7-seat wedding gift that drives him to risk his marriage in order to save his true love.
READ REVIEW
Next Previous 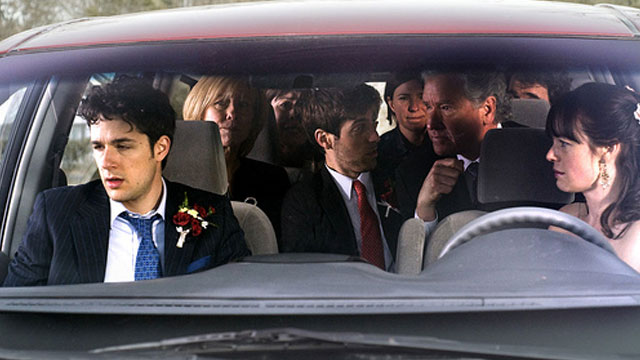 I don’t know what’s in the water up there in Canada, but after last year’s Long Branch, and now the online release of Man v. Minivan, I’m considering just packing everything up and hightailing it to my illustrious neighbor to the North. Originally produced in 2009 but only now appearing on the web, Spencer Maybee’s Man v. Minivan hits the comedy hat trick for me—funny, well-written, and filled with enough sweetness to add some heart to all the over the top shenanigans.

There’s no doubt that this is a film that explores common cinematic tropes—the profane best friend, a groom with cold feet, a stripper with a heart of a gold. Yet, it takes all the potential clichés and manages to give them all a fresh enough twist to keep things moving into uncharted territory. This isn’t just another movie about a man child who’s afraid of getting married—the dude who is inexplicably going to marry the wrong girl for no reason other than plot mechanics. Rather, it’s a film about a regular guy who’s afraid of the conformity, “the expectedness,” that his impending nuptials represent. From the opening shot, you know you’re in for smart little ride—a rolicking comedy that has you strapped into the backseat of a super-red, super-dorky, soccer mom approved Toyota Sienna.

The script, co-written by Maybee and SOTW favorite Dane Clark, is snappy, the film well-paced. Tonally, it strikes a balance between Apatow raunch and Ephron sweet. The result goes down smooth—a shot of American blueness followed by a swift chaser of Canadian hospitality. But, all of that scriptwork would be for naught if the acting wasn’t good. Fortunately, the film is filled with solid performances from a slew of “that guy” Canadian actors. The cast has to sell some tough moments (especially at the film’s climax) and each player handles the challenge with  aplomb.

Coming from the Canadian Film Centre and playing at a bunch of festivals in 2010 (including TIFF), I’m glad that this film has finally made its way online. Edgy enough for the high-fiving frat brother but also accessible for the whole family (how’s that for your box quote?), it’s truly the kind of thing the whole family can love—or at the very least—watch amicably as they forcibly crowd themselves into the roomy interior of your new cherry red seven passenger minivan. Director Spencer Maybee is currently developing a coming-of-age feature script called First Comes Love. Be sure to follow him on twitter. Unfortunately, Spencer had to limit access to the film. To view it, use the following password: minivan
Vimeo (pwd: minivan) Filmmaker Website
LIKE TWEET