In a typical South London kebab shop, Nathan explains to Beefy why he really shouldn't eat the burgers.
READ REVIEW
Next Previous 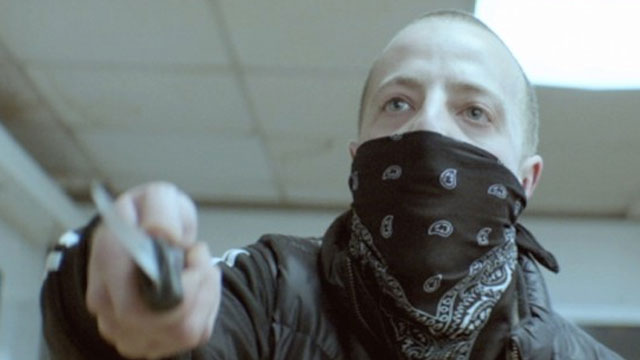 Selected as one of the first films to feature in Vice’s I’m Short, Not Stupid series (along with fellow SotW picks—Bear & I Love Sarah Jane), Dan Sully’s gritty and inventive short film debut The Ellington Kid demonstrates exactly why the young, up and coming British director is being tipped for a bright future in filmmaking.

Whilst the most famous of urban myths always seem to revolve around escaped convicts, babysitters, or the backseat of cars, Sully puts a very British twist on his modern fable by setting his own story in a late-night kebab shop in London. Speaking to the director over email, he told me where his own slice of inner-city folklore originated:

“A long time ago I made a music video for an artist who lived on what they used to call ‘Murder Mile’ in Clapton.  He told me the story of his friend who got stabbed, ran into a kebab shop for safety and was saved by the workers in the shop.  The story stayed with me and in retrospect I guess it’s a classic urban myth, but hopefully I got a bit of extra life out of it for the short!”

Following his graduation from Bournemouth University and first taste of the industry as a runner for production company Partizan. Sully made his introduction to the world of directing on MTV music show Gonzo, before creating a series of successful music promos and commercials for the likes of Elbow, Howling Bells and Nike. Describing his work on music videos as “my film school…where I learnt how to direct”  the director’s earlier experiences were invaluable for making the transition into narrative shorts –  “I made mistakes, but also found my voice and what I was interested in as a director. The only thing I hadn’t done in music videos that I was itching to do was a scene with dialogue in it.”

By spelling out his own directoral philosophy with a quote from Stanley Kubrick atop his website, Sully may have set himself an ambitious ethos to emulate. Yet, the cinematic flair, passion for storytelling and maturing confidence on show in his brief but powerful debut proves he is determined to leave his own distinct mark in the world of filmmaking.