The epic and spellbinding tale of Derek, an office worker, as he struggles with the true speed of planet Earth. Director Dan Ojari's RCA thesis film and a Sundance 2012 selection.
READ REVIEW
Next Previous 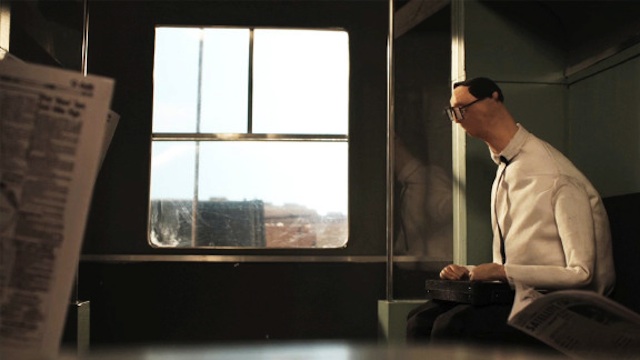 With glowing feedback from fellow animators Mikey Please, Emma De Swaef, Patrick Doyon and The Moth Collective in the comments section of the Slow Derek trailer on Vimeo, Dan Ojari’s stop-motion short is gaining a formidable reputation as one of the stand-out animations of recent years. Since its premiere as part of the Royal College of Art show back in 2011, Ojari’s short has toured film festivals worldwide, picking up several well-deserved awards along the way.

Slow Derek is about a static man who discovers how fast the earth is spinning, and the consequent effects this has on him.

Projecting the feeling that the world is leaving its protagonist behind, Ojari’s short centres around office worker Derek, as he struggles to keep pace with the true speed of planet Earth. Slow Derek’s narrative cleverly contrasts the leisurely lifestyle of its hero with the dizzying rotation of the world in which he lives, with an oddly unsettling effect. Often leaving your head spinning as fast as the world that is throwing the titular Derek out of whack.

When quizzed about the films plot over email, Ojari declared that Slow Derek is “very much about relativity and the contrast between the mundane and the colossal. The starting point was after I became particularly fascinated with how fast the earth is travelling, especially because we don’t feel this speed. We are literally hurtling through space at hundreds of thousands of miles per hour and yet don’t feel a thing. I felt this was, aside from being an amazing actual fact, also was an interesting metaphor for modern day life”.

The cinematic flair on show in the production of Slow Derek, make it feel as much indie cinema as stop-motion short. Its fantastical, yet grounded, narrative combines with cinematic techniques like focus pulls,  tracking shots along with some well-constructed sound design by regular RCA collaborator Joseph Tate (I’m Fine Thanks, Matter Fisher, Belly) to create an unusual and unique short.

“I very much wanted the film to have an aesthetic realism to it, and to create a believable world. I didn’t make it thinking I was making an animation specifically and I suppose I took inspiration from both film and animation equally. I think it can be healthy not to think of them as separate entities. But one of the main things I love about stop-motion is that you have free reign to experiment, you can tell big stories and create whole worlds in the confines of a small dark room”.

Having originally witnessed Ojari’s epic animation back in the summer of 2012 at the Rushes Soho Shorts Festival in London, it’s a short that’s stuck in my mind ever since. Strong in story and style, Slow Derek’s impact doesn’t weaken with a second or third viewing. Its unusual narrative and outstanding production values make it stand up alongside  fellow RCA graduation short The Eagleman Stag (which Ojari worked on) as some of the most memorable stop-motion you’re likely to see captured in the short format.